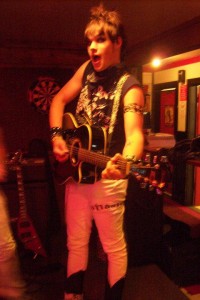 He may be more like Adam Lambert than we thought….wait, did The Ashley really just say that?

Surely, American Idol Top 24er James Durbin has heard his share of Glambert comparisons. Turns out James has a glam rock past, performing with his old band The Hollywood Scars. This isn’t really gossip, but it’s still fun. Plus, James looks hot in eyeliner!

James, or “Jimmy Levox” as he was known back then, offered vocals for the “sleaze rock” band for a couple of years. According to the band’s Facebook profile, the band is “dedicated to bringing back the party, theatrics and glam to rock n’ roll.”

Naturally, the TMZ has already picked up on this story, finding an interview that Levox…er, I mean James, did for the band. In the interview, he says his favorite things to write songs about are “having sex with women … whores … [and] having a good time.” (If you want to see that interview, go here.

So far, us gossipers have had a hard time digging up any dirt on any of these new Idol contestants. They all seem to be squeaky clean people who just want to sing. (How boring.) I could sure go for a Corey Clark arrest record to surface right about now…

Who knows…maybe we’ll find out Casey Abrams is a former stripper or something—Lord help us if we do.

Anyway, if you want to hear James in all his glamrock glory, click here to go to one of their performance videos. (It takes a couple of seconds to get to the music part. Is it wrong that I kind of like them? But then again, I like the movie “From Justin, to Kelly” so that’s not saying much.)

Here’s some more photos from his glam rock days. Click the photo to see it larger. 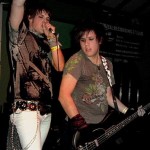 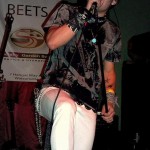 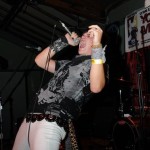 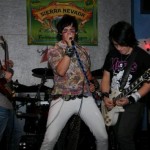