It’s Monday night, which for The Ashley means sitting for two hours while watching stupid people do and say stupid things. Yes, kids, it’s time for the Bachelorette!

This week, the men are headed to Thailand. This is the first episode of the “Love Tour Around the World” that this show has been doing for the past four or five seasons. Bentley should have stuck around for one more episode. Sure, he would have had to endure Ashley but he would have gotten a free trip to Thailand.

Anyway, Ashley is still dreaming of the not-dreamy-at-all Bentley. She says she can’t forget him. Um, how can you even remember him? You only knew him for, like, two weeks. At this point I realize that she’s going to be talking about that crapnugget all night. Because of this The Ashley is going to keep a tally of all the times that Ashley mentions him. I need other activities to keep me amused during this crappy show.

After arriving in Thailand, Ashley goes to a travel agent named Annie, to help her plan her dates with the men. Annie has some stellar suggestions and Ashley pretends she can actually understand everything that Annie said.

The men arrive at the villa, and we know for sure we’re officially in Thailand because they start playing some stereotypical Asian music in the background of every scene. The first one-on-one date goes to Constantine (or maybe it’s Ben F. I’m convinced they’re actually the same person?) They had planned to take a boat to a private island; however, an angry Asian man in rain gear tells them it’s a no-go: it’s too stormy to go out. Apparently Annie didn’t provide any alternate date suggestions so they are forced to stroll through the streets of Phuket during a monsoon. Fabulous! 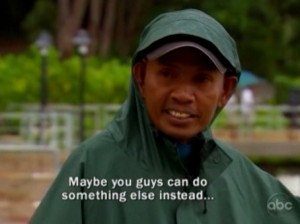 They decide to “talk to the locals.” They pick an old man who’s just minding his on business, sitting outside and decide to accost him in English, ordering him to provide relationship advice. Conveniently, there is a Thai woman who happens to speak almost perfect English standing nearby and she helps to translate that no, these crazy Americans aren’t trying to rob him, they just want to know his advice for a successful marriage.

The man tells them not to try to win in a relationship. That’s great advice for Constantine, being that he has absolutely no shot whatsoever of ending up with Ashley at the end of this shenanigan. The man wears orange shorts on a date.

Afterwards, they head to the beachfront dinner part of the date. Ashley’s still jonesing for Bentley, and feels that she should tell Constantine how much she likes Bentley and how she wishes it were actually him on the beach with her rather than Constantine. To humor him, Ashley asks Constantine about his past relationships. She couldn’t look more bored while she listens to his answer. (You know she only asked so that he would ask her about her past relationships: aka Bentley.)

He ends up getting a rose. He gives her a piggyback ride through the water. Enjoy it, bro. That’s the closest you’re ever going to get to having Ashley ride you. You’re so on the “Just Friends” train. 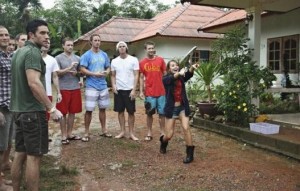 It’s group date day and it’s still raining. Ashley tells the guys that they’ll be spending the day painting a a Thai orphanage. Half the guys are stoked; the other half look like they’re pretending to be excited about the date because they don’t want people to think they hate orphans. Most of them are trying to figure out if it would be inappropriate to try to hook up with Ashley in a Thai orphan’s bunk bed.

Ryan (aka “Mr. Happy”) is irking everyone with his ‘supervising’ of the work. One poor guy is drenched in sweat as he’s painting the ceiling and looks like he’s about to swing his paint roller into Ryan’s face as he listens to him bark orders at everyone (all in a positive, enthusiastic manner, of course.)

Ashley says spending time at the orphanage is helping her get over Bentley. I can barely stand hearing his name anymore.

After the do-gooding it’s pool party time, and everyone’s talking crap on Ryan. The guys are tired of Ryan and his upbeat, cheesy ways. They discuss possibly mauling Ryan if Ashley gives him the rose on this date. Please, God, give him the rose. That’s what this show needs: a good mauling.

Ashley is about to present the rose when all of a sudden Ryan jumps up and grabs Ashley and says he has to tell her something. Thinking it must be something really important if he had to interrupt the entire date to tell her, Ashley goes off with him.

The important thing he had to tell her at that exact moment? “Um…I’m really excited to see you again.” For reals? Even I want to maul Ryan now.

She gives the rose to Ben F. (Damn, no mauling.)

The next day is Ashley’s one-on-one with Ames. They take a private boat out and then kayak through the caves of Thailand. We find out that Ames is an ‘adventurer’ (aka a guy that likes to brag about how much stuff he has done). He’s been to Thailand twice: once to climb mountains and once to go to cooking school. (Do guys like this really exist? Most guys I know just want to sit on the couch, scratch themselves and watch Sports Center.)

Ames’ adventuring tells us one thing: he has a lot of money. You can’t just jet off to Thailand because you want to learn to make Pad-Thai unless you have boatloads of cash.  However, dating someone like Ames could get annoying: every time you’d want to hang out at home and watch “Full House” reruns, he’d be trying to get your ass off the couch so you could go climb the Andes or something. Sometimes a girl just needs her sweatpants and Uncle Jessie. Have mercy!

Despite this, she gives him a rose. They can not end up together, as their child would possibly go down in the record books for having the largest forehead ever.

It’s cocktail party time and she decides she’s going to add an extra rose because there’s really only one guy she wants to get rid of. This is a total dick move; at least if two guys go at the same time, it doesn’t feel as hurtful. Cutting one guy is just sad. She lines the guys up, execution-style, and prepares to deliver the blow.

The roses are handed out and it’s down to West (the guy who’s wife died) and Ben C. (who I don’t remember). She gives West the boot, and doesn’t even walk the poor schmuck out.

Just for the record, Ashley said the word “Bentley” a total of 19 times tonight. I’m glad I wasn’t doing shots every time she mentioned him or I’d be dead.

Next week: they’re staying in Thailand, which means more rain and probably a whole lot more talk of Ashley’s one true love, Bentley.