This is the much-talked about (and pretty much dreaded) Bentley episode of the Bachelorette. I knew that most of the episode will be spent talking about this douche-nugget, yet I still chose to watch it. It’s kind of like choosing to suck air into a cavity in your mouth; you do it just to see how bad it’s going to hurt.

This week, the gang is off to Hong Kong and there are seven schmucks still in the competition to win Ashley’s heart. However, their attempts are going to futile, as Ashley only has eyes for Bentley. We are only two minutes in and already Ashley has said the word “Bentley” 14 times. The car manufacturer that makes Bentleys should really be paying her for all this free publicity.

Anyway, Chris Harrison comes to Ashley’s hotel suite to tell her some big news: they’ve somehow finagled Bentley into coming all the way to Hong Kong to give Ashley some “closure.” Ashley can hardly believe it. I wonder how much moola ABC had to pay Bentley to get him to endure Ashley for another 15 minutes? No fair, they should be paying us too! We all have to suffer!

Ashley works up the balls to go visit Bentley in his room. She greets him with a hug and goes straight for a kiss on the lips. (ABC probably had to pay him double because of that!) We see that producers have sprung for the corner suite for the Bent-ster.

They have an awkward conversation about everything except for the fact that Ashley still wants to jump bones; including, but not limited to Ashley’s bug bites, the room temperature and his daughter (who is apparently named Cozy? Number one sign you might be white trash? You name your child after a thing that keeps your beer from freezing your hand…just saying!)

Finally, she tells him that she was basically in love with him and that the “dot, dot dot” he left is killing her. At this point, I would like to “dot dot dot” Ashley’s forehead with a giant frying pan. Bentley keeps looking at her and basically gives her the “it’s not you, it’s me, take a hint” speech.

Still completely void of any brain function, Ashley asks “Is this our period?” Oh….my…God. Will you stop with the punctuation mark references? You people are f’ing killing me. She then asked why he had to come halfway around the world to tell her there’s nothing between them. Um, two words, honey: free trip. Bentley’s not going to pass up a chance to “dolla make you holla” a Chinese girl on ABC’s dime!

Finally it’s over and we move on to Ashley’s one-on-one date with the never-before-seen Lucas. Apparently he is from Texas and works in oil. These are good things to hear. They go walk the streets of Hong Kong, and Lucas is scared, as he’s never traveled outside the United States. Luckily, he has Ashley as his tour guide. She takes him to a market and tells him, “this is a market, where they sell things!” Thanks for the update, Captain Obvious!

After chowing down on some pig intestine (as you do), they head to dinner on a Chinese pirate ship (as you do). Apparently, Ashley likes Lucas (or maybe his oil stock) and gives him the rose. He asks to kiss her (aww) and then the token Asian music starts playing in the background which means it’s time to dance. They sway in the moonlight. Please, someone gag me with a shovel, and then hit me with it.

Moving on, it’s time for the group date. The guys find out that they will be recruiting locals to help them row boats! These things just keep getting stranger and stranger. I never thought I’d say this but I miss the good ol’ days of the ‘Bachelorette,’ when a group date meant climbing into a helicopter and/or a hot tub.

Anyway, the boys head out into the streets of Hong Kong and are having a hard time finding anyone to help them row. They are shocked that no one wants to do manual labor for free with a bunch of idiot Americans. 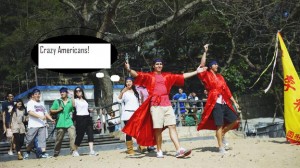 Happy Ryan recruits “Domino,” an equal chipper local man, who helps him find some guys to row. Meanwhile possible twins Constantine and Ben are unable to recruit any natives to help them. They do, however, buy red bathrobes for the occasion (well played, boys).

The teams start towing, while Ashley sits on the front of one of the boats beating a drum. Yes, this happened. I felt like I was watching the rowing scene in “Ben Hur.” (If your 8th grade history teacher didn’t make you watch this movie and you have no idea what I’m talking about, click here.)

The poor Chinese recruits are being yelled at by Ames and Mickey, while Ashley beats the drum, commanding them to row faster. When it all ends, one of the Chinese rowers is so inspired by what just happened that he decides to propose marriage to his girlfriend. OK…someone got engaged. Can we just end this show now, please!?

That night, Ashley’s all suited up looking like an Asian prostitute in a Spandex leopard print dress. Ames grabs her and takes her into the elevator for an uncomfortably awkward makeout session. Then they go up to the roof to look at the lights of the city. Undoubtedly, the glare from the lights reflected off of Ames’ giant forehead, surely blinding 2-4 Asian people below.

The next day is Ashley’s 1-on-1 date with J.P. Once again, Ashley’s sporting an oversized painter’s smock shirt. It’s either hooker dresses or painter smocks for you, isn’t it Ash? There’s really no in between. I especially loved the black bra under the white shirt. It gave it that extra “chola” flare.

Ashley asks him what he thinks will be happening with them in a month. He tells her he’s not sure but he thinks it will involve someone getting down on their knee.

Well, Ash, it’s the least you could do. You did make him endure your jammy pants and grandma glasses on your last date. Help a brother out…..oh, he was talking about him proposing? Surrrrrre….

Ashley decides that J.P. must learn the truth about what happened with (wait for it) Bentley! She’s making such a big deal about this whole thing. She rattles on and on and J.P. just looks confused and sad. He knows he’s stepped into the bear trap. All the man wanted to do was eat his chicken rice bowl in peace and now he must endure this crap. Poor guy.

It’s time for the rose ceremony and Ashley is wearing another cheap looking hooker dress. She decides that she must confess to the guys about bringing Bentley to Hong Kong. You can tell she’s just dying to talk about this crapsmacker once again.

She basically tells the guys that now that Bentley’s gone and there’s no hope of her being with him, she’ll start considering some of the remaining schmucks to be her husband. Understandably, not all the guys take this in stride. The camera keeps flashing onto Mickey, who appears progressively more anxious and sweaty. Lucas Oil is pissed and looks like he wants to knock Ashley in the head as she talks about her “closure.” Do it! She made you do Thai boxing! She deserves it! She leaves so the men can discuss what she’s told them talk crap on her.

Happy Ryan isn’t fazed at all. Ashley could have told him she had a three-way with Bentley and one of the Asian boat rowers and he would have enthusiastically asked her what type of lube they used. Nothing brings this guy down!

The rest of the guys seem to be pretty angry, and some of them are even making threats that they are going to leave. I’m loving that the power has shifted from Ashley to the guys.

Mickey gets his chance to talk to her and flat out tells her to send him home. She calls his bluff and says “go ahead and leave.” Ten minutes later, he’s on a boat back to the Real World and Ashley looks heartbroken. God bless Mickey for having the balls to knock this chick down a few pegs.

Ashley still has to cut one more guy and decides to ruin her chances of opening up a husband and wife dental practice and cut dental student Blake. (Don’t worry guys, he’ll be back on the ‘Bachelor Pad!’ It’s been confirmed!)

Next week? The gang is going to Taiwan. Seriously, they need to get out of Asia…and I seriously need to get a life.