Disclaimer: Just so everyone knows, The Ashley loves this show, and almost everyone on it. (Except for Farrah, of course.) My recaps are written all in good fun. That is all.

This week on Teen Mom, everyone’s moving. The official title of the episode is “To Be With You.” That sounds way too much like a Kenny G song title, circa 1991 so The Ashley has renamed it “The One With All The Shacking Up.”  It just seemed like the right thing to do.

Anyway, Gary and Amber have hit a new record of togetherness; they’ve managed to stay together one whole week. Naturally, at this stage in the relationship, the best thing to do is to move in together. Despite the fact that all of us viewers know that Gary and Amber have a maximum shelf-life of 10 days before one of them ends up storming out of the house yelling “I’M DONE!,” they sign the papers anyway and rent a house.

Still reeling from last week’s burgle incident, Catelynn and Tyler are moving in together so Catelynn doesn’t have to live in a homeless shelter or move in with the grandmother that hates her. The couple goes apartment hunting, and Cate has her little brother in tow. (I guess it was visitation day at the slammer? April had to go see her man Butch!)

The apartment manager shows the couple the first place, which just happens to have a ginormous hole in the wall. He explains that the past tenant ripped the intercom out of the wall (as you do), maybe in a fit of rage. Perhaps Amber had previously lived there?

The manager asks, “Will it just be the two of  ‘yuz’ living here and no kids?”

Ty and Cate insist it will be just the two of them (hopefully Butch will be able to visit though?) The manager tells them that it will cost $950 for them to move in, which includes the carpet cleaning fee. (It’s expensive to remove the body fluid stains from the floorboards, ya’ll!)

Meanwhile, in Farrah Land, it’s off to the final plastic surgeon appointment. Deborah picks her up and on the way over asks Farrah how she’s doing and if she’s eating good (*well)? Farrah, in her typical snot-nugget fashion, snaps, “Of course I eat good (*well), I’m in culinary school!”

Um, don’t act all high and mighty there, Farrah. I seem to remember you burning a Tombstone Pizza For One last season. Relax.

They arrive at the plastic surgeon and Farrah tells him she’s doing well and no longer needs her painkillers. (Perhaps she can sell her remaining pills to Aubrey Akrill?) We get all close and personal with some part of Farrah’s body. It’s either her elbow or her breast. Who knew they could show this on MTV? Farrah’s happy with the size of her knockers and says she hopes her new boobs will help her book more jobs. Or was it Johns?

Over in Tennessee, Maci is considering moving home because she’s struggling with money in Nashville. (That big plastic surgery bill probably didn’t help!) Maci says she can’t get a job because she’d only make enough to pay for daycare. (Good thing she has those hefty MTV checks coming in every month, yes? Oh, wait, we don’t talk about that!)

Maci’s friend, Keelie, comes over to hang out, only to be promptly hit by Bentley. (There’s a weird fuzzy camera thing going on during Bentley’s “assault” on Keelie. I guess after the whole Amber beating Gary fiasco, MTV doesn’t want to take any more chances showing domestic violence!) Bentley is put in timeout, but he knows the punishment is a joke and starts giggling.

Now, The Ashley is not the authority on child-raising, but I’m pretty sure this isn’t what’s supposed to happen after you punish your kid for beating your friend.

Anyway…it’s moving day over in the Indiana for Gary and Amber. After moving the mattresses, Gary heads down the stairs to put some stuff in the basement when –oops–he breaks through the stairs and falls through the wood. (No, seriously.) This could possibly tie last week’s “Is Kyle Slow?” text for best ‘Teen Mom’ moment ever.

Poor Gary. Amber has no mercy on him and proceeds to scream “You’re so chunky! You’re so chunky!” Gary tries to reason with her, protesting that “it’s pressed wood!” Amber won’t let up. I’m sorry, but if you really love someone, you pretend you don’t notice when their girth causes them to break through the floorboards. It’s just the right thing to do.

Gary slinks over to the corner to pull ‘pressed wood’ splinters out of his paw, and Amber gets a phone call from her brother Shawn, who apparently prefers to be called “Bubby.” Strangely, this is The Ashley’s nickname for her dog, but moving on…

‘Bubby’ asks if Amber, Leah and Gary would like to join him and his kid at the waterpark in a few days. Amber’s excited to show off her ginormous tattoo of Leah’s face so she jumps at the chance to go.  They leave the great state of Indiana and head to the exotic land of Tennessee. The car trip’s not going so well and Gary is mad that Amber keeps cussing in front of Leah. After Amber says The Baby Jesus’ name in vain, Gary’s had enough. He scolds her and it’s time for the monthly…”I’m done!” from Amber.

They pull into the hotel and Amber goes to the front desk to inquire about getting a flight back to Indiana. She calls ‘Bubby’ to explain that she wants to fly back home because Gary called her out on her poor mothering.

Shawn (who is my new favorite person) basically tells Amber to suck it up and act like an adult for a millisecond so he can go to bed and stop listening to her crap. Gary comes out to apologize to Amber (?) and the pair make up.

The next day at the water park, things are going great until Amber stops to have a heart-to-heart with ‘Bubby.’ He tells her that she has anger-management problems, which she denies. Almost on cue, Gary comes over with Leah and Amber screams at him for interrupting. How dare he bring her child over to her while she’s talking to ‘Bubby!’ Um…I think you just proved your brother’s point. That ‘Bubby’ is a wise man.

Meanwhile, Maci and Kyle are still trying to come up with a solution for Maci’s money troubles. Kyle suggests that perhaps he should move in with Maci to offshoot some of the cost of living on her own. See guys, Kyle isn’t slow! Maci agrees, but has to go break the news to Ryan that she’s moving in with Kyle. Here we learn that Ryan is apparently well-versed in the Tennessee law, protesting that Maci and Kyle can’t live together unless they’re married because it’s against the law in The Tennessee.

The Ashley’s too lazy to look this up and see if it’s true but, um, has Ryan forgotten that he once lived with Maci when they weren’t married? Just sayin’….

Things are moving along for Farrah too. She’s scored a modeling job at a hair show for the weekend. They’re going to fly her to Denver to attend the show. Because that always happens. I guess it’s worth the roundtrip Delta flight to score a real-life MTV celebrity at a hair show.

She’s sad that she doesn’t fit in with the other models. Um, probably because you sit there scowling and emitting your horrible-ness to everyone around you. If you quit acting like a self-centered, terrible person all of the time and just pretended to be interested in someone other than yourself, maybe people would like you. Just sayin’….

Catelynn and Tyler have found an apartment and it’s time to move Catelynn’s mattress. Apparently, April must have found this mattress outside the liquor store after a ciggie run because it’s dingy and ripped and has nasty stains on it. They push it through the house and onto the truck (hopefully the drive helped to air out it out a bit.) 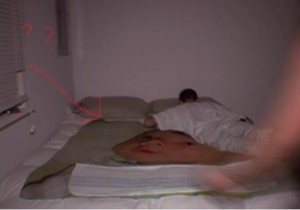 They move it in and add sheets, pillows and a (semi-cute/semi-creepy) blanket with a ginormous photo of Carly’s face on it and it feels  like home.

All jokes aside, The Ashley’s happy that Cate and Tyler decided to move out on their own. She loves them and wants them to get married! I just hope this doesn’t mean that we won’t be seeing Butch on the show anymore. That would break my heart.

Next week’s episode will feature Butch, child protective services and Farrah’s creepy cryface. You call it Tuesday, I call it the best day ever!!!