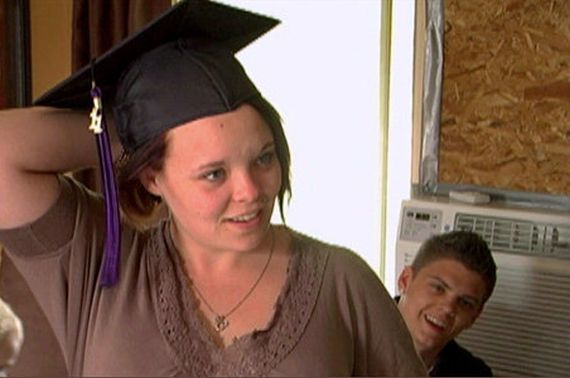 Well, kiddies, it’s once again time to venture into a new season of Teen Mom. However, season four won’t be your typical Butch-Gets-Arrested-Farrah-Treats-Her-Parents-Like-Crap season, no sir. This is the final season, and as the commercials that led up to last week’s premiere stated, this will be the Most.Dramatic.Season.EVER! I think I just peed myself a little with excitement.

Anyway, this episode picks up where last week’s double episode premiere extravaganza left off. Catelynn and Tyler have returned from their trip to New York and are getting ready to graduate high school! While Cate’s dad, David, and little brother, River, are flying up from Florida to attend the graduation, the word is still out if Tyler’s mulleted jailbird of a father, Butch, will be out of the slammer in time to join the festivities.

Honestly, they should just cancel the entire graduation if Butch can’t make it. Personally, I wouldn’t be able to celebrate my high school achievements knowing that Butch is locked away in a cell somewhere. Besides, let’s be real here: what’s a party without Butch swinging his greasy mullet around and trying to score his “special medicines?” Not any party I’d like to attend, that’s for damn sure!

Over in Tennessee, Maci tells us that Ryan and his family are planning a vacation to Florida for a week and will be taking Bentley with them. Maci refuses to stand by and let Ryan have his court-ordered week alone with Bentley, so she decides to just invite herself along on her ex-boyfriend’s family vacay! (As you do.) The fact that Ryan can’t really stand her should make for a fun time for all!

Even Kyle has a “be-otch, you crazy!” look on his face when Maci tells him her plan to tag along on the Edwards’ trip. He obviously wants no part of the escapades, as he quickly mumbles something about going to a car show that weekend. Maci then decides that she’ll just bring a bunch of her drunken girlfriends on the trip to Florida.

Speaking of Florida (and for some reason we do that a lot this episode), Farrah‘s father, Michael, has arrived at Farrah’s new apartment in Fort Lauderdale. After spending the last five days sleeping in a smelly, hot U-haul, Michael is then forced to “help” Farrah unpack. (And by help I mean basically do everything while Farrah “supervises” and barks the occasional order.)

I feel so bad for Michael. I’m fairly certain he would probably be willing to trade lives with just about anyone at this point (possibly even Butch!) After huffing and puffing for hours to get Farrah moved into her new place, Michael takes Farrah and Sophia to the beach.

Michael hints to Farrah that she might want to hold Sophia’s hand and not let her wander aimlessly into the ocean. Farrah, of course, snaps at him for daring to question her parenting skills. (She might want to listen to him; if that kid gets pulled out to sea and goes “bye bye,” it will really hurt Farrah’s chances of getting a ‘Teen Mom’ spin-off show!)

Later, they go to lunch and Michael reveals that he is worried about 1) hurricanes and 2) Sophia getting abandoned by Farrah so he mentions that he’s considering moving to Florida to help out. Farrah, who has just been a little slice of heaven throughout this entire episode, just loses it on her father, barking at him and getting all tarty. Someone desperately needs a frying pan to the face. Just sayin’!

Over in Indiana, Gary heads to his lawyer’s office to see if he and Leah will be able to visit Amber in rehab in California. Afterwards, Gary gets a phone call from Amber is able to let her know of his plans to come to Cali to see her. Amber barely grunts a response. I liked her better when she was all hopped up on boxed wine. Rehab Amber is no fun.

Gary then heads over to his mom’s house to discuss his impending trip to see Amber. Gary tells his mom about his master plan to get Amber ‘habbed and then get back together with her, and his mother looks like she just wants to smack him. She’s rolling her eyes and doesn’t seem thrilled at all at the prospect of having Amber as a daughter-in-law in the near future. Relax, mom; Gary hasn’t bought another Wal-Mart engagement ring or anything, so there’s still hope.

Next, we check back in with Maci, who is calling Ryan to see if it’s OK if she wedges herself into his family vacation. Of course, we all know this is just a formality because Maci’s basically going to do whatever she wants, regardless of what Ryan says. Ryan’s not happy at the prospect of having to spend a week with his ex-girlfriend, especially because he’s planning to bring his special “lady friend” along on the trip.

Maci is shocked to hear that Ryan has a new girlfriend. Kyle, on the other hand, seems downright amused to find out Ryan has a new chicky and can’t keep from smiling throughout Maci and Ryan’s entire phone call.

Meanwhile, back in Michigan, Catelynn’s father and brother have arrived and everyone is sitting around the living room when the phone rings. It’s Butch!! Unfortunately, as per usual, Butch is not calling with good news: he won’t be out of the slammer until Monday, which means he will miss seeing Tyler graduate by one day.

Tyler is disappointed, however, Butch has big plans to make it up to him, telling him, “I’ll get ya a card or somethin’…can’t afford to buy you nothin’.” This is understandable, of course; we are in a recession and crack isn’t as cheap as it used to be. Money’s tight for Butch.

Perhaps Butch can make Tyler a graduation gift in jail? Or maybe he can get one of those picture frames with twelve openings that you’re supposed to put your child’s school pictures in from every year. Instead of school photos, maybe Butch can insert his 12 best mugshots into it! The perfect gift for any occasion!

While they’re disappointed that Butch will be absent from their big day, Cate and Ty refuse to let it ruin the festivities. They head to the park with their friends to discuss their future plans. We learn that Tyler is considering becoming a parole officer! (Perhaps Butch’s private P.O.?! I smell a dream job!)

Back in Farrah land, it’s time to interview nannies. (You know, because all teenage mothers can afford to have a nanny…) Farrah is interviewing a woman and, within two minutes, little Sophia is calling the woman “mommy” and looking like she wants to crawl in her purse and go home with her. After confirming with the woman that she doesn’t live in “the ghetto”, Farrah basically hires her.

She then calls her mother, Debra to inform her that she has received her class schedule for college. We get a gander of the class schedule on Farrah’s computer screen and can see that one of the classes she’s taking is about fairy tales. No. Seriously. I’m not kidding. She’s legit going to be spending the next 12 weeks learning about Little Miss Muffet. W.T.F. I should have gone to college in Florida. In California they make you take history and math and crap.

While on the phone, Deb informs Farrah that she needs to ensure that the nanny she’s hired doesn’t live in a den of sex offenders or something. Farrah gets pissed and starts yelling, “Yeah, mom. Thanks for stating the ooooobvious!” (I don’t know about you, but I prefer to read that last line in the voice of Barbara Evans from Teen Mom 2, reminiscent of the classic Barb quote, “Hope ya have fun livin’ in the street with ya booooooyfriend!“)

Deb then tells her that if she takes Sophia to the park, she actually has to watch her and get on the slides and stuff with the kid. Um, duh, Deb. Farrah obviously knows how to do this. Haven’t you seen all those mother/daughter “fun in the park” photo shoots Farrah’s set up for the tabloids? She’s a pro at this.

Back in Tennessee, Maci is heading over to Ryan’s parent’s house to drop Bentley off for his trip, as well as inform Ryan’s parents that she’s tagging along uninvited. When she arrives at the house, MTV allows us take a look at the living room walls, which are littered with photos of Ryan and Maci: posing with Maci’s baby belly, kissing and embracing. Um…yeah, ’cause that’s not awkward at all, being that they broke up years ago.

After discussing her plans to barge in on the vacation, Maci meets up with her girlfriends to see which one of them want to go with her and mooch a free vacation off of MTV. I can’t wait until next week to see how this all plays out!

Over in rehab, Amber meets with her counselor to discuss her anger issues. Amber says she’s doing much better now and will probably be able to resist beating the beJesus out of Gary when he comes to visit. They then call “Bubby” (aka Amber’s brother, Shawn), who tells Amber that she’d have to be crazy to want to get back together with Gary because he’s controlling. Um…I’m pretty sure it’s always Amber barking/hitting at Gary, not the other way around. Later, Gary calls Amber to inform her that he and Leah will be arriving next week for a visit.

In Florida, it’s time for Michael to return to Iowa. After seeing him off, Farrah and Sophia head to the pet store (oh…my…God…not again!) Luckily, they are just there to purchase a few fish and not a dog, since we all saw last season what a crappy dog-parent Farrah is. As they head to pick out the fish, a tiny French bulldog puppy catches Farrah’s eye. Even though she basically abandoned her last dog at her creepy neighbor’s house (not to mention tried to get it to go to the bathroom in the toilet), Farrah feels like she is ready to get another one.

She gives Sophia the choice of having a fish or a puppy, and Sophia is adamant that she wants a fish. She keeps screaming, “Fish! Fish!” all while Farrah is pretending she doesn’t hear her and goes to pay for the dog. I will be saying a rosary for that poor, poor pup.

In Michigan, it’s time for Cate and Ty’s pre-grad barbecue. Cate’s mom, April, arrives and comes face-to-face with her former sexy-time partner, David. They share a long look at each other (Cate’s dad face is basically saying, “WTF was I thinking?!”) before April goes inside the house to chat with Catelynn.

We learn that at one point, April and David were “best friends,” (aka acquaintances who sometimes ended up putting their genitals together). April is sad that they didn’t end up together. I, for one, am happy they didn’t make it; otherwise Butch would have never come into our lives!

The episode ends with Cate and Ty receiving their high school diplomas.

Next week, we may get some answers to some very important questions: will Maci murder Ryan’s new girlfriend at the beach? Will Butch ever get Tyler that graduation card? Tune in next week to find out!