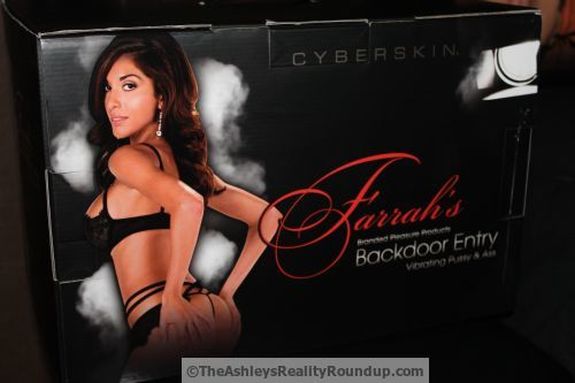 If you Roundupers have ever doubted how much The Ashley loves you, let this story be an indication that The Ashley will stop at nothing to bring you the most exclusive reality TV gossip and news coverage.

Anyway, on Friday night, The Ashley hauled her lazy butt down to Pomona, California, to attend the “red carpet” release party for Teen Mom-turned-adult-film-star Farrah Abraham‘s new line of adult toys. (The Ashley is going to have to be careful about how she words this post, due to some words being no-no’s in the publishing world. Please bear with me here.)

Click the thumbnails to view the photos at full size… 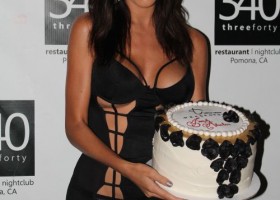 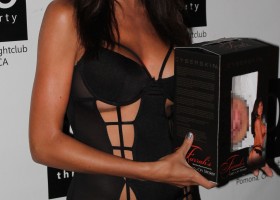 The club, which was miles and miles (and miles) away from Hollywood, was packed for the release party. All of Pomona’s finest  degenerates were in attendance to celebrate the release of Farrah’s plastic vajayjay. Although the event was supposed to start at 10 p.m., Farrah did not arrive until about 11 p.m.

Dressed in a strappy lingerie-like dress (?) Farrah wore high heels and the plastic smile that’s typical of her when she’s getting adored by “fans.” While the outfit was mildly stomach-churning, Farrah’s hair was the true star of the evening. Fried to within an inch of its life, Farrah’s hair is so damaged that it may be best for her to use some of her p0rno money to invest in a wig.

Anyway, the folks from Topco Sales, who created Farrah’s toy line, brought out a few samples of Farrah’s signature toy– a lifelike plastic mold of her vajayjay and back door– molded directly from Farrah’s private parts. The Ashley was able to get a photo of the side of the box, which included a description of what the product’s “dual love tunnels” can do. Ew…and also…ew. 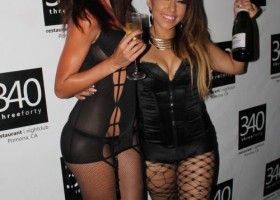 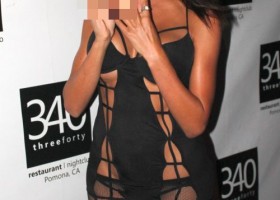 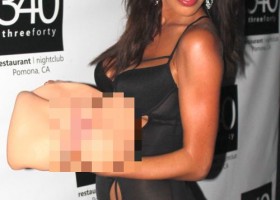 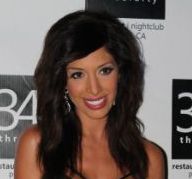 Farrah posed proudly with her plastic whoo-ha, holding it up for the photographers, using her fingers to show off those, um, love tunnels, and even putting it disgustingly close to her own mouth. The Ashley has seen a lot of weird stuff go down in her career, but this was truly one of the most shameless displays she has ever witnessed.

Next, Farrah posed with her adoring fans. The Ashley would estimate about 200 people lined up at the club to meet Farrah and, she must admit, Farrah was actually really nice to the fans. (Of course, they were only in her presence for about 30 seconds to snap a quick photo before being shuffled along, but still…the fact that Farrah was nice to anyone is worth noting.)

After all of the fans had been filtered through the line, The Ashley had a chance to interview Farrah and ask her why the heck she felt the need to make a plastic vajayjay and bottom mold of herself and sell it to people. (That interview will be up tomorrow, so be sure to check back!)

Afterward, Farrah headed to a VIP booth where she partied, while club-goers circled around her trying to get photos. (You know Farrah was loving every minute of it!)

While Farrah showing off her plastic body parts was certainly enough to scar The Ashley for life, it could have been worse. She could have personally demonstrated how they work– or even more horrifying–should could have sang at the party!