Rachel Reilly is no stranger to reality TV. She’s raced around the world on The Amazing Race, raked in the big bucks after winning the thirteenth season of Big Brother, and even got married on a made-for-reality-TV special back in 2012, but the redhead is about to make the leap to the big screen after landing her first movie role! Rachel is about to start work on ‘Axeman II: Overkill,” a horror movie that will also star controversial Teen Mom star Farrah Abraham.

While Rachel isn’t totally leaving reality TV behind—she currently hosts her own reality TV-themed talk show– she is excited to make the leap to movies.

“[Axeman II: Overkill] is a fun, super-campy ‘80s-style horror flick so it’s going to be so much fun,” Rachel told The Ashley in an exclusive interview. “The script is witty and has a lot of action. It’s going to be really fun to watch and super scary!”

According to the film’s director, Joston Theney, Rachel will play Breaker, “a double-crossing, machine-gun-toting mercenary looking to take more than her share of the money she’s been hired to find.”

Rachel said she auditioned for the film the traditional way: by sending in her headshot and resume through a casting site. 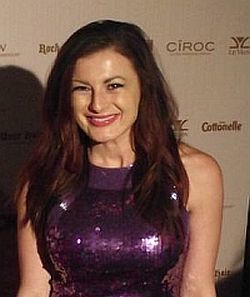 “Talk about not cashing in on her fame!” Joston told The Ashley. “She could have easily said, ‘Don’t you know who I am?’ but she didn’t. She kicked ass in the audition and we offered her the role. Later we found out who she was and were ecstatic!”

The movie will not begin filming until September, but Rachel said she is eager to meet her co-stars, which, in addition to Farrah also include ‘Baywatch’ star Angelica Bridges, the WWE’s Bryan “Adam Bomb” Clark and Arielle Hader.

“It’s a fun cast with a lot of talent. I think I am going to learn a lot from everyone working on this film,” Rachel said.

She is even eager to meet Farrah, who has a reputation for being difficult to work with.

“I don’t know really know much about Farrah but what we have all read online [about her],” Rachel said. “I’m sure she will be working hard with an acting coach for this role since it will be her first major project in the industry and she is trying to transition out of the adult industry.”

Although Rachel’s frequent reality TV co-star (and husband), Brendon Villegas, won’t be starring in the film with her, Rachel said he is thrilled that she was given this opportunity.

While Rachel said it’s unlikely we will see her and Brendon (or, “Brenchel” as they are affectionately called by their fans) do another stint on ‘The Amazing Race,’ they may venture back into the genre at some point.

“We would love to return to reality TV!” Rachel said. “It’s our thing and now that I am the reality expert on ‘Hollywood Today Live’ on FOX, and hosting my own talk show, Reality Relapse, going back to reality TV would be like investigating journalism!”