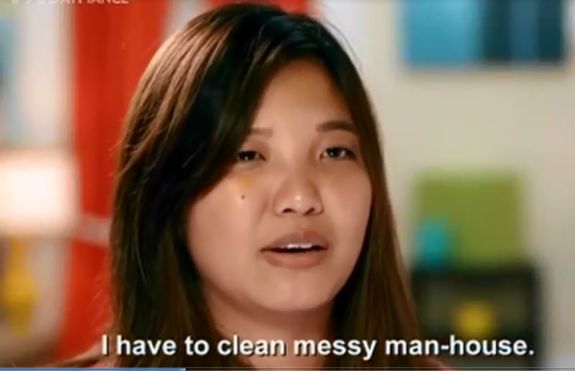 It’s time to dive back in to the strange and sometimes creepy world of 90 Day Fiance!

This week’s episode begins with Mark cooking breakfast for his still-sleeping, much younger fiancé Nikki. It appears that Nikki may be just as creeped out by the idea of her sleeping with Mark as we are, as she currently has her own bedroom. Just to be sure that Mark can’t creep into her bed after-hours, though, Nikki sleeps lying width-wise across the bed, leaving no room for Mark to join her.

Nikki has been in the United States for four days, and Mark says there have been some challenges. One of those challenges appears to be getting Nikki to wake up in the morning. (Don’t worry, Mark; a lot of people have trouble waking their teenagers up for school!)

After calling her name several times, Mark uses a whistle to wake Nikki up. Instead of being a whistle for dogs, it appears to be a whistle that only teenage mail-order brides can hear.

Mark doesn’t want Nikki to become “sedentary” which is really his way of saying “fat”.

Nikki can’t work until she gets her green card, but she thinks Mark is working too much and not paying enough attention to her. Apparently Nikki doesn’t realize that being on TLC is only lucrative if Mark were to take more wives, or if she started birthing children in the double digits.

To keep his fiancé happy, Mark has come up with a big surprise for Nikki: he bought her a car!  She has never driven a car before, so Mark is going to be teaching her, in the brand new (manual shift) sports car he has bought her. Thanks Dad!

Just in case we forgot that Mark is using Nikki as a replacement for his ex-wife, he mentions the car he has bought for Nikki is the same model he had purchased for his ex. When Nikki seems bothered by this, Mark reassures her by telling her that her model is fully loaded, and his ex’s car had manual windows. Sure Mark, that makes it less weird.

Next, we check in with Devar and Melanie, who are about to go ring shopping. If you are wondering how unemployed Jamaican lifeguard Devar is going to be able afford to buy Melanie a ring, you’re not alone. The jewelry store clerk is also concerned about her commission their budget.

Melanie says that her parents will be footing the bill for the rings. (WHAT?! Is this a thing?)

Devar can’t work right now, but plans on making that up to Melanie by keeping her happy in the bedroom.  (Also…ew.)

Once he is able to work though, his lifeguarding background should be a huge asset. After all, there is no shortage of jobs for an ocean lifeguard in a landlocked small town in Pennsylvania.

Now that the rings are taken care of, one of the next orders of business is for Melanie to meet Devar’s mother. Devar is not sure if his mother will like Melanie or approve of him marrying a white woman. Melanie is concerned that Devar’s mother lives in Maryland, which means she may have to see her more than once a year. It’s easier to ditch a mother-in-law if she lives in a whole other country.

The next couple we check in with is Josh and Aleksandra, who are heading to a Fourth of July barbeque. Aleksandra is expecting the American holiday festivities to be soured, however, by her getting judgmental glares and questions about her past from Josh’s Mormon extended family.

The party guests are all giggling, wearing American flag t-shirts, and carrying red Solo cups with no alcohol in them. In other words, it’s your typical Fourth of July party…. in an Old Navy commercial.

This storyline is already feeling old, and it’s only the fourth episode. We’re gonna need Aleksandra to start go-go dancing half-naked during Granny Mormon’s birthday party or something to keep it interesting.

Next, we see what Kyle and Noon have been up to. The couple is shown sleeping and being woken up by their roommate Brian and his bicycle. He’s cutting through their bedroom in order to leave the apartment, which is his only exit option.

Later, the house is a mess, so Noon starts cleaning. Brian is kind enough to pause his video gaming and move his feet so that Noon is able to clean his and Kyle’s bachelor filth.

Apparently Kyle watched Snooki & JWoww, because he decided to copy Roger Mathew’s proposal to JWoww. He’s going to propose to Noon after they both go skydiving, and to make things even more romantic, Kyle has brought Brian and two other friends along. The banner, which says “WILL U MARRY ME,” is visible from the sky, and Noon seems touched.

Luckily, the banner appeared to be clean of any roaches. Kyle must have left them all back at their apartment.

The final couple we check in with this week is Fernando and Carolina. Fernando informs us that he and Carolina have been apart for almost a year now, and her visa still hasn’t been approved. Production has decided to fly Fernando to Columbia, because filming their Skype calls has gotten boring.

Apparently the visa is being delayed because of something having to do with Fernando’s divorce. Fernando and Carolina have an awkward dinner with her parents, where both of them question Fernando on when the hell he is getting their daughter out of their house.

Next week- Alexei and Loren set up a sex schedule at the request of her father; Nikki confronts Mark about his self-help books about divorce; Carolina goes dress shopping; and Melanie considers a pre-up.