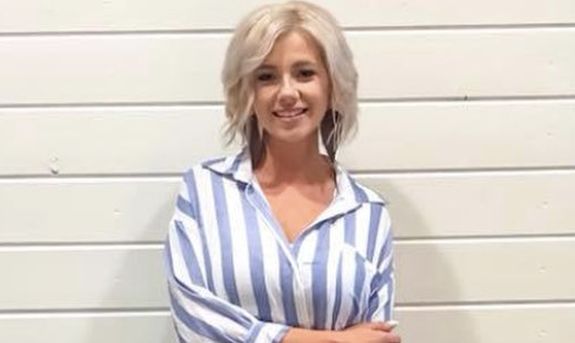 Former 16 and Pregnant star Lindsey Nicholson appeared on this week’s episode of the Coffee Convos podcast to tell the emotional story of her twins’ births and their journey in the NICU. Lindsey, who starred on the fourth season of “16 and Pregnant,” brought podcast hosts Kail Lowry and Lindsie Chrisley to tears with the heartbreaking story of her daughter Paisley’s health struggles.

Lindsey also discussed how much her life has changed since she appeared on “16 and Pregnant” back in 2012. (Her episode documented the birth of her daughter, Aniyah, who is now six.) Now married to a man who adopted Aniyah, Lindsey also recently opened a clothing boutique in honor of her daughter Paisley.

“I never really thought that anyone would care that I was on “16 and Pregnant,” come six years later,” Lindsey said on the podcast. “But a lot of people still care and a lot of people want to know what I’m up to. I think it’s cool because I want to show people that it’s OK to have a baby young. You can still make something of yourself.

“I’m not saying go get pregnant, but there’s no excuse why you can’t make something of yourself. You are in charge of your own fate.”

Here, The Ashley breaks down some of the topics that Lindsey discussed during her podcast interview.

Go subscribe to @coffeeconvospodcast to hear all about my story. This was so EMOTIONAL ? I can’t thank @lindsiechrisley @kaillowry enough for allowing me the opportunity to give light to the NICU life so many parents experience. I’ve never been able to talk about our story out loud before, because all I would do is cry and shut down. What an amazing podcast you girls run! From me never talking about our nicu journey out loud to me venting for an hour with y’all says a lot. Thank you for making me feel so welcomed and comfortable enough to be vulnerable? ✨If you know anyone who has a baby or babies in the NICU bring them a coffee at the hospital, bring them a home cooked meal, bring them restaurant gift card, offer to baby sit other children if they have other kids, let them cry to you, just listen and be a shoulder to lean on, don’t be offended if they don’t wanna talk it’s not personal, pray and pray big for them. These nicu parents need to be showered with love and support during the nicu stay . It’s the hardest most emotional time they will ever experience.✨ I know I say “like” a lot in it. LOL I wouldn’t advise playing a drinking game to how many times the word “like” is said, but I was so overwhelmed and emotional during it. I couldn’t even help it! Lol

On where she is today:

When “16 and Pregnant” viewers first met Lindsey, she was pregnant with Aniyah, dating Aniyah’s father Forest and living in Reno. (She was also training to be a cage fighter, which she hopes to start doing again in order to fight Farrah Abraham!)

“My whole life has completed transformed since I lived in Reno. I’m a realtor and I love doing that,” Lindsey said. “My husband TJ and I got married, and I moved from Reno to Texas. We had twins, he adopted Aniyah.”

“I loved your story,” Kail told Lindsey. “You are really a success story.”

“I look back and I’m like, if you would have told me six years ago that I’d be here today I never would have believed you,” Lindsey said. “I never thought that I could run my own business, have twins, have a six-year-old, be married, and do all of this. But when you put your mind to something and you want it and you’re passionate about it, you can do anything.”

On what happened to Aniyah’s biological father:

The bond these two share is incredible. Aniyah is SO protective over Paisley and always making sure she’s okay. Nobody can make Paisley smile or laugh the way her big sister can✨?‍♀️

Lindsey told Kail and Lindsie that her daughter’s biological father, Forest, exited Aniyah’s life when she was two. Her husband, TJ, adopted Aniyah in February 2015, before he married Lindsey in July 2015.

“I’ll just say a little bit because I don’t think [Forest] is worthy of my energy,” Lindsey said. “He’s completely absent, and he’s been absent since she was two. I told him that we wanted to move to Texas and he did not care. He did not come say goodbye to her. He would not appear in court when I took him to court. He is a deadbeat, is what he is. Aniyah doesn’t know anything about him, she doesn’t remember him. She has no recollection of when we lived in Nevada.

“TJ is her dad. He’s adopted her, and that’s all she knows,” Lindsey added. “It’s amazing because it’s like God knew he was her dad because they look alike, they act alike, they don’t like the same foods. They are just alike, so I feel like everything happened the way it was supposed to.”

On her pregnancy with the twins:

11 years of having the most amazing person to call my best friend . I was truly honored to be the maid of honor for you today ??

“I got pregnant with my husband, and we found out we were pregnant with twins,” Lindsey said. “[Twins were] completely unexpected—we were definitely were only trying for one! But we were given twins and everything was great.”

Lindsey stated that, 16 weeks into her pregnancy, her cervix began shortening.

“By 20 weeks I had nothing left and I started dilating. I got to be about 4 cm dilated,” Lindsey said. “They put me in the hospital. I stayed there a couple months. There was nothing they could do. Since it was twins, you can’t really prevent labor.

“I just really had to sit in a hospital bed and eat. That was my job, to gain weight,” she added.

Lindsey stated that she made it to 29 weeks and four days before she went into labor for the final time.

“I had [my son] Jackson, he came out crying and everything was good,” she said. “I couldn’t hold him because they took him right to the bed and put the ventilator in so he could breathe on his own.

When Lindsey began talking about Paisley’s birth, she teared up, as did Kail.

“Then I had Paisley, and she came out and she wasn’t crying,” Lindsey said as she held back tears. “I’ve never talked about her story aloud before. She wasn’t crying at all, and that’s the first sign something is wrong. They took her to put the ventilator in, and they couldn’t get it in. She was so feisty; she didn’t want them touching her. That was even more scary because she needed to breathe. They put it in, but I started bleeding too much so I couldn’t even turn around and look at her, because my doctor was like, ‘Don’t move! You’re bleeding too much.’”

On life in the NICU with her premature twins:

Lindsey’s nightmare in the NICU began shortly after the twins’ birth.

“I went down and I looked at them and they were so tiny, like 2 lbs, smaller than a baby doll,” she said. “Jackson, at first I thought he was the one I thought would have issues, he seemed really sick. Paislee seemed fine. That was shocking to everyone.”

Lindsey was discharged after three days, but the twins were still in the NICU.

“It was the hardest thing I ever went through. I had to leave both my babies at the hospital…Right away my parental instincts told me something was wrong with Paisley,” Lindsey said. “She was crying all the time. It was the cutest cry because her lungs weren’t even developed. It sounded like a little mouse crying, it was so sad. They thought it was just her adjusting to outside life. Her white blood cell count was high. Day 5 rolled around and I could tell something was not right. Sure enough, they found out she had a staph infection. At 4 in the morning, I got a phone call. She had staphylococcal meningitis.

“You feel so helpless when your baby’s that sick,” Lindsey said. “And you can’t hold them, and you can’t just touch them. I just wanted to hold them and I couldn’t’ do anything. Paislee was in so much pain, just crying and moaning. It was the hardest thing I ever went through.”

Look who flew back just in time for Christmas ?❤?? #wishcometrue✨ #bringpaisleyhome

Paisley and Jackson both came down with staph. Jackson recovered quickly, but poor Paisley’s fight for her life was just beginning.

“I was happy to see my son better, but I look across the way, and there’s my daughter and she’s lifeless,” Lindsey said. “I started doing research on babies with staph, and it said that, after Day 6, [the baby’s] chances of living are just a couple percent. I found that part out on my own because the doctors didn’t want to scare me. They brought on an infectious disease team, and a surgeon, and hematology. So it was all these people, and you know in the NICU, if there are people always coming to see your baby, it’s not good. You want to be left alone when you’re in the NICU because that means your baby is getting better.

“Day 6 rolled around and they started a new antibiotic, but by Day 7 she was even worse…it got so bad. She was so pale and her stomach was huge. She couldn’t eat, she would spit it all up with the feeding tube. She was literally just lifeless, just fighting for her life. They gave her another anti-biotic, and they were like, ‘This is it. There’s no other antibiotic that’s going to work at this point.’”

Lindsey said she was terrified for her daughter.

“My husband went to the doctor, and asked if she was going to be OK. The doctor just looked at Paisley and put his head down. They were always so upbeat and positive and he wasn’t that day and just said, ‘I don’t know.’ I just had to walk away.”

What would follow was three liver biopsies, countless tests, multiple trips to larger hospitals in Houston and Dallas, and many scary days in the NICU for Lindsey and her family.

On how Paisley is doing today:

“From where she was, she’s amazing now,” Lindsey said. “She’s still really weak. She’s finally eating from a bottle, and hasn’t used her feeding tube for two months…

“This is the longest she’s gone without a surgery or doctor. Everything is on the up and up now. She gets physical therapy and occupational therapy to help her with rolling over and sitting up,” Lindsey said. “She can’t sit up yet. She’s nine months old but she just started rolling over. It’s so sad. She’s better now. I would say she’s extremely intelligent. Paisley is so smart, there’s nothing going on there. It’s physical strength. She doesn’t eat any solids, nothing.”

Lindsey’s son Jackson is doing great, but Paisley is still trying to catch up with her twin brother.

“Everything that happened was because she was premature and because of the staph infection, Lindsey said. “Her being sick so long affected everything. She’s really like a six-month-old baby because of everything she went through.”

(The Ashley can’t do the story justice here, so she recommends you listen to Lindsey tell her entire NICU story during the Coffee Convos episode below!