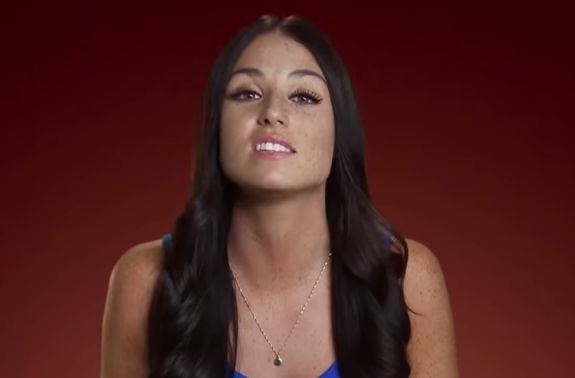 Fans of MTV’s The Challenge are demanding the network release footage of a cast member’s alleged assault during the filming of “War of the Worlds,” following several of the show’s stars speaking out about what they say happened.

A petition posted Wednesday to Change.org by fans asks MTV to air footage showing Amanda Garcia allegedly being tied up with tape one night by three male cast members while filming, resulting in her losing some of her hair.

“On #TheChallenge33, a cast member was possibly assaulted after a prank that could have gone too far. As fans, we want the cast member to be able to see whether or not the actions of the pranksters were malicious or not,” the petition description reads.

That same day, ‘Challenge’ vet Shane Landrum resurfaced on Twitter to urge the show’s fans to demand the alleged footage in question be aired. He also claimed that the show’s cast members have received letters that state that they are not to talk about what allegedly happened.

“I’ve gone unprivate so all ‘Challenge’ fans know that certain entities at a certain television studio are sending threatening letters to cast telling them they will be sued if they discuss Amanda’s assault and its cover up…Demand the footage. Just like a racist assault that was covered up. Only you can demand the footage.” 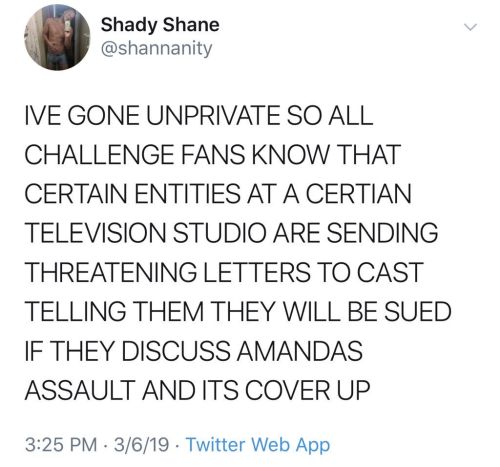 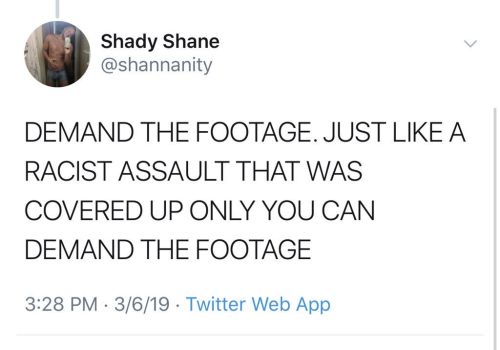 Amanda first mentioned the alleged incident on Twitter on February 22.

“Looks like they didn’t wanna show the guys tying me up against my will either,” Amanda wrote. “Hmmmm. I guess if you don’t constantlyyyyy play victim on tv they don’t wanna show that s**t #TheChallenge33”

@DayDaVonne_ looks like they didn’t wanna show the guys tying me up against my will either. Hmmmm. I guess if you don’t constantlyyyyy play victim on tv they don’t wanna show that shit 🤷🏻‍♀️ #TheChallenge33

Da’Vonne Rogers also spoke out about the alleged incident, which according to her, involved Amanda getting her face, hair and head taped up by her “War of the Worlds” co-stars Johnny Bananas, Theo Campbell and Kyle Christie. In her YouTube video recap of the season’s third episode, which was posted last week, Da’Vonne told her version of events. (She begins talking about the alleged incident around the 13:20 mark, by the way.)

“Johnny got the tape and tied up Amanda. Let’s talk about that for a minute because I’m still not OK with that situation,” she said. “Before I get into it, let me say that I do not think that the intention behind it was malicious…I think Amanda even believes that it began as a joke.”

Da’Vonne said that, initially, Johnny, Theo and Kyle were pranking Amanda to get her to shut up.

“Apparently Amanda was doing all this s**t-talking or whatever and Johnny and them got some tape and they taped her mouth shut, taped her whole face. Basically, mummified her face with this tape,” Da’Vonne said in her video. “And so it went from ‘Ha ha ha this is funny’ to Amanda screaming and crying saying, ‘Stop this hurts, stop, it’s not funny, stop stop!’”

Da’Vonne said she became aware of what was happening when she heard Amanda crying and yelling for them to stop taping her up.

“So when I come out of the room, she’s coming into the room and we kind of meet each other like halfway,” Da’Vonne said. “By this time, she’s gotten the tape off of her face. Like, she’s ripping it off her face but it’s still in her hair. She’s trying to pull the tape out of her hair but it’s pulling strands and strands of her hair out. She’s like ‘I’ve got all this tape in my hair and it’s taking my hair out.’”

When you remember tomorrow’s Monday 😩 #TheChallenge33

Da’Vonne said that she was alarmed by how much of Amanda’s hair was being ripped out by the tape, so she took Amanda into the bathroom and drenched her hair in conditioner to make it oily so that the tape would come out of her hair easier.

“She’s sitting there in the bathroom bawling, and I’m slowly peeling the tape off but still her hair is still coming out. It just…it wasn’t cool. I do feel like they owe her an apology because that wasn’t OK…”

Other “War of the Worlds” cast members have discussed the alleged incident on social media as well. During an Instagram Live session, Paulie Calafiore stated that he felt the network purposely omitted the footage from the episode to protect those involved.

“They like, wrapped her up…I forget what they used but it was a little disturbing,” Paulie said. “Amanda was crying when they did that. It wasn’t cool.

“[MTV] choosing to leave that [incident] out is for sure them protecting certain individuals who would have gotten f**king slammed,” he added.

Paulie spilling on Amanda getting tied-up and of course this dumb b*tch is trying to pull excuses out of her ass to downplay it pic.twitter.com/8zvQfbexwI

The Ashley has reached out to the network for comment on this alleged incident, and will update this story when more information is available.