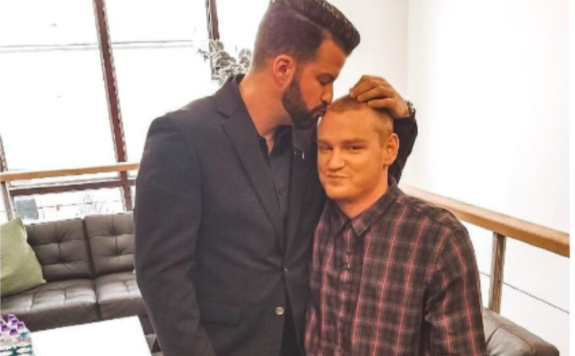 Frenemies Johnny Bananas and Wes Bergmann of The Challenge have taken their bantering shtick to the set of The Maury Show to put their longstanding feud to rest.

According to HollywoodLife, the foes will reveal the results of their Maury Povich-issued lie detector test on an upcoming episode of 1st Look TV—the weekly show currently hosted by Bananas himself.

In a preview for the May 11 episode, Wes, Johnny and Maury all appear to have fully committed to the talk show’s big-reveal format, with Johnny jumping for joy at one point and possibly getting emotional at another.

Wes may be able to outwit a bunch of dumb rookies, but can he outsmart a lie detector? The answer to this, along with many other questions will be revealed on @1stlooktv when we take our beef to @TheMAURYShow 5/11 ⚖ 📈 #YouAreTheFather #GingerVitus #LiesDetected @WestonBergmann pic.twitter.com/s2pOkXbBrD

Johnny shared the preview with his followers on Twitter, while also taking an opportunity to hit Wes with a dig, per usual.

“Wes may be able to outwit a bunch of dumb rookies, but can he outsmart a lie detector? The answer to this, along with many other questions will be revealed on @1stlooktv when we take our beef to @TheMAURYShow 5/11,” he tweeted.

(Do “other things” include the back story on that ginger sweater Johnny sold on his website, because we’re dying to know how he talked Wes into that one… )

Johnny and Wes hinted at taking their rivalry to Maury’s show last month during a social media “feud” in which the two went back and forth arguing over who was more obsessed with the other… as all grown adults do.

In case anyone out there still isn't convinced that that Wes' Banana obsession is unhealthy, this is what he's tweeting at 8am, 2 weeks after my elimination. Hey @TheMAURYShow please send help 🙏🤤🍌 #ImYourDaddy #StayObsessed https://t.co/tsV1CwbtGb

As The Ashley previously told you, it was revealed that Johnny and Wes had actually already filmed a segment for ‘Maury’ before publicly reaching out on Twitter to the talk show host.

@WestonBergmann and @johnnybananas just filmed a segment for @TheMAURYShow 🤣🤣 They took a lie detector test about whether or not they really hated each other 💀☕ #thechallenge33 #TheChallengeMTV #Waroftheworlds pic.twitter.com/obRRRpegq3