Gather ’round kiddies; it’s time for another episode of Teen Mom 2! Now that we are officially four episodes into Season 10, things are about to get craaaazy (and by crazy I mean “barely watchable”). Hold on to your Lunchables!

We kick things off in the ding-dang holler, where Ali, Leah‘s glassesesess wearin’ youngin, is begging her for contact lenses. Leah agrees to take Ali down ‘er to the eye doctor to see if contacts are a possibility.

Leah packs up the twinseseses, leaving Addie behind with her dad, Jeremy, whom Leah tells us she’s been “coparenting well” with. (That’s most likely code for “lettin’ him put his spatula in her frosting jar.”)

Aleeah doesn’t want any part of the eye doctorin’. Instead, she wants to join Addie at Jeremy’s— not because she enjoys his company, but simply because he has a well-stocked fridge.

I get it. I mean, if a kid eats enough canned ravioli, she’ll probably be willing to hang out with anyone if they dangle a meal that doesn’t come with a pop-top in front of them.

Leah calls up Jerm to see if he minds if Aleeah raids his fridge. Jeremy— whose voice makes him sounds like he just smoked 10 packs of ciggies with April Baltierra—agrees to let the youngin root through his feed stash.

Jeremy then texts Leah and asks if he thinks Corey Tyler‘s britches will be all up in a knot because his youngin wants to hang out with him. (Apparently, Corey is still sore about what Jerm said about him at the last Reunion.) Leah says that she doesn’t care what Corey Tyler thinks, that youngin is gettin’ her mitts on Jerm’s food!

Up in South Dakota, Chelsea‘s  annual father daughter dance storyline is in full swing. Despite Aubree flat-out telling her mom that she wanted Cole and her dad Adam (and presumably whatever parole officer is currently tailing him) to attend the shindig, Chelsea insists on quadruple-checking with Aubree that she does, in fact, want Adam there.

When Chelsea asks Aubree for the 83rd time (probably) if she still wants to invite her dad, Aubree shakes her head no. Somehow, Chelsea manages to not swerve off the road in excitement and calmly tells Aubree, “that’s the end of that, then.”

Chelsea, knowing she has to ride this storyline until the wheels fall off, goes on to ask Aubree if she’s okay with only bringing Cole to the dance, to which Aubree (finally) shuts her down.

Next, we check in with Kail who’s back in Dover and, to the surprise of no one, is still not on good terms with her mom, Smirinoff Suzi, especially after their recent sidewalk-showdown via cellphone

Kail tells her friend Mark about her San Diego experience as well as the medium who basically saw Suzi’s call coming from  a mile away.

Mark isn’t impressed by this so-called medium and says he’s been telling Kail for years that her mom still loves her. Kail glazes over Mark’s comments and reminds him that Suzi doesn’t know her “from a can of paint.”

Kail reiterates that she doesn’t plan to reach out to her mom again and Mark says he’s not going to try to persuade Kail to change her mind.

Newly-graduated Jade is still pissed at her mom Christy for making an absolute mockery of her big day, and rightfully so. However, with Christy (and Corey and Sean) still freeloading off of her, Jade is forced to tolerate the nonsense because she’s literally surrounded by it.

Jade is hoping to get a salon space going soon because her hours, as well as everyone else’s, have been getting cut recently at her grandma’s chicken restaurant – the place where Jade’s entire family is employed… or rather where they were employed.

Christy drops the bomb that Jade’s grandma “has potential buyers” for the eatery and tells Jade, Corey and Sean “we’ll just leave it at that.”

Christy says she’s already started hunting for a new job in order to keep her from backsliding into her old ways and she already has an interview (and hopefully nothing else) lined up. In the meantime, she says she’ll help out with Kloie and even Sean says he’ll sacrifice a couple hours of gaming to do the same.

Finally, we head to Florida to hang out with Briana. Her loins are still pulsating with chlamydia, so she has to figure out how to talk to Luis about it.

Bri’s trusty pal “Shirley” is trying to cheer Briana up about her diseased lady parts. She points out that, hey, it could have been worse. She could have had things crawling in it (um…she did…Luis) and/or her entire hump hamper could have been “fallin’ out.”

Ahh, “Shirley.” You should really be writing for Hallmark. I’m sure there’s a market for people to write “I’m sorry your vag is diseased” cards.

Hopefully she catches him between the lunch and dinner shifts at the Sizzler, where he’s surely servin’ up DJ’d tunes for the senior citizen crowds.

Bri decides not to tell Luis what disease she has, just that she has one. She wants him to sweat it out. When Luis finds out Bri is diseased, he apologizes and promises to make himself an appointment at Ye Olde Clinic. Briana says that, sadly, Luis giving her an STD has ruined the thrill of humping him in club bathrooms and hotel rooms, which in the end is going to hurt Stella.

Briana is just happy that what Big Lu gave her this time is treatable.

Back in West Virginia, it’s time for a riveting trip to the eye doctor! Ali gets her eyes inspected. We are little watching a kid change her prescription lenses. WTF. I miss the days where people on this show were beating their friends on the head with drumsticks and whatnot.

The eye doctor declares Ali’s vision to be stable.

However, he delivers the news that Ali will not be able to wear contact lenses in the future. He chooses to use a rather creepy analogy as to why she needs glasses, telling her that, if her friend starts chucking balls at her face and one of the balls hits her good eye, she’d go blind. Or something.

Leah rings up Corey Tyler to give him the report that their youngin’ isn’t fixin’ to get contact lenses any time soon. Corey is relieved to hear that Ali “don’t need no new prescription or nuthin’.”

Ali is disappointed, and Leah tells us it hurts her to see Ali not have the same options as everyone else.

The next scene (which kicks off with a song about being “colorblind”…nice sensitivity there, MTV), Leah and Ali come to Jeremy’s house to pick up the other girlseseses. Aleeah (who is most likely stuffed to within inches of her stomach bursting with Jeremy’s food), side eyes Leah and Jeremy as they attempt to pull Addie’s tooth out in the kitchen (as you do).

Leah explains that the coparenting with both ex-husbandeseses is going great! It’s a tooth-pullin good time for all!

When we check back in with the DeBoers, Chelsea informs Cole he’ll be holding things down at this year’s father/daughter dance solo. Because Adam won’t be attending the festivities, Cole has so kindly decided to rock a mohawk in his honor. What a guy.

Chelsea reminds Cole that Aubree initially wanted to invite Adam (you know… just like we saw her tell him last episode), but for some unknown reason, Aubree changed her mind. Chelsea is still shocked that Aubree came to this decision all on her own (sure, Jan) and hopes it wasn’t because she felt conflicted.

Back in Florida, Roxanne is furious at Luis for diseasing her daughter. She says Luis was at fault for not telling Bri he’s been doinking naive club hoes unprotected on the regular. (She fails to realize her daughter was doinking a deadbeat DJ unprotected, and is just as much to blame for the STD.)

Roxy vows “not to be nice no more.”

Hopefully Big Lu remembers to wear his helmet for his next visit. Roxy’s shoe-throwin’ mad!

Later, Luis (and his diseased dong) arrive at the apartment. Bri tells him that him giving her an STD has kind of killed any trust she had with him.

Over at Kail’s house, her litter is running amok, except for Isaac who is busy throwing shade at his mom and her resting bitch face.

Later on, Kail talks to her friend Natalie about her upcoming counseling session with Jo.

(Wait? A friend of Kail’s who doesn’t have a noun for a name? Shouldn’t this chick be named Bone or Ham or FitTea or something?)

Kail says she hopes to squash some of the issues she and Jo have in order to better co-parent Isaac. One of those issues, she claims, is Jo’s built up animosity towards her.

The next day is the counseling session and, unfortunately, we aren’t invited into the office to watch Kail tell Jo he’s wrong over and over.  After the session, Kail says things went well and she feels like she and Jo are on better terms. After picking up her three boys, Kail tells Isaac that she and Jo went to therapy to talk about how they can be better parents to him and Isaac tells Kail she is a good parent. 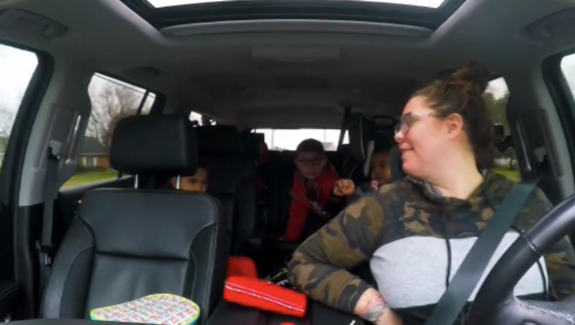 With everyone in Jade’s house now unemployed, Jade focuses on securing a salon space to start bringing in some cash to support herself, her child, her video-gaming baby daddy, her oddly quiet step-dad and never-quiet mom. Before heading out to pound the pavement, Jade makes breakfast for Kloie and sits her in her high-chair before waking Sean to tell him he’s on baby-watching duty. After many attempts, Sean eventually shuffles himself out of bed

At the salon, Jade meets manager Gage and takes a look at an available studio. Blown away by Gage’s pitch of the instant hot water and tilting shampoo bowls, Jade agrees to take the spot.

Jade shares the big news with (a slightly more awake) Sean and tells him she’ll need him to leave his game controller at home for an afternoon to help her decorate her studio space. Sean agrees, then Jade launches into her future plans to open her own salon, to which Sean responds in a very on-brand manner.

Jade does take a second to remind Sean that he needs to find a new job, but Sean points out that they’re saving money on daycare with him being out of work. Sean mumbles that he’s proud of Jade… before throwing on his headphones and getting back to his games. Jade continues to talk as if this blatant disrespect isn’t happening right in front of her face and even goes as far as to tell Sean she couldn’t have gotten through school without his help.

Back in South Dakota, it’s finally the night of Aubree’s dance and, after picking her up from school and embarrassing her in the car with his sick dance moves, Cole redeems himself by surprising Aubree with a trip to Nail World.

Aubree and Cole get “the freshest nails,” as Cole puts it, and Aubree is super pumped about their outing. That night, Aubree puts on a dress as sparkly as her nails and Cole throws on a shirt resembling an image in one of those hidden pictures books and the two of them head off to the dance.

On the way home from, Aubree and Cole agree that they had a “supes good time” and Aubree even says she plans to go again next year. (Good news for Chelsea and her built-in storyline!) Cole says he’s fine with that and volunteers to be Aubree’s date until she’s 30 if she wants, to which Aubree claps back, “don’t go too far.”

That’s all for this episode!