HGTV is looking for America’s next renovation superstar with Design Star: Next Gen, a six-episode competition series inspired by HGTV’s Design Star – the most successful and highest-rated franchise in HGTV’s history.

Set to premiere in 2021, the competition series will be hosted by Allison Holker Boss, a professional dancer who competed on Season 2 of So You Think You Can Dance? and later appeared on Dancing with the Stars (Seasons 19-21 and Season 23). According to the network, the judging panel will consist of head judge Jonathan Adler, designer Lauren Makk and a rotating cast of celebrity experts. 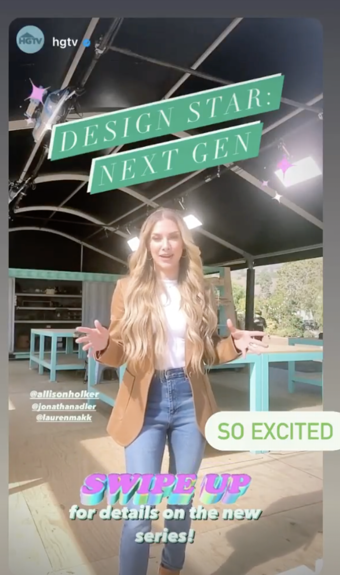 The show will be made up of eight finalist – designers, renovators and social media brand-builders – competing in intense weekly challenges with only one competitor winning the prize of $50,000 and their own HGTV show.

“We’ve assembled an amazing cast of competitors for ‘Design Star: Next Gen’ who will unleash their creativity to showcase different styles and innovative approaches to renovation,” said Lauren Ruch, group senior vice president, programming and development, HGTV. “HGTV ‘Design Star,’ the original series in the franchise, was an epic success, so fans have a pent-up desire for us to bring the concept back with a fresh spin.”

Unlike the original series, which premiered in 2006 and ended after eight seasons, ‘Design Star: Next Gen.’ will be filmed in an isolated “design hub” community away from traditional production locations. Each of the competitors will have a design lab (a house-like space), which must be reimagined for each challenge. The “design hub” community will provide everything the competitors will need for each challenge, including a design center for sketching, a construction workshop where they can build their creations, as well as a fully-stocked furniture and styling warehouse.

HGTV Design Star is coming back with a new twist — Design Star: Next Gen featuring @allisonholker, @jonathanadler and @laurenmakk leading the search for America’s next home renovation superstar! 🔎🤩 Details at the link in bio!

“This series will be fun, fast and energetic,” Lauren said. “The design labs will really force the designers out of their comfort zones and demand truly innovative and creative transformations. Every designer in America wants to win a show on HGTV, so let the games begin!”