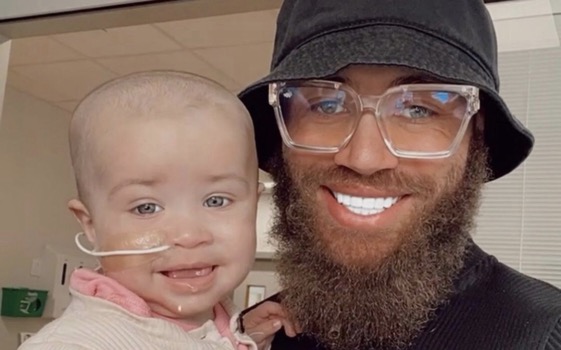 Days after revealing that his daughter’s leukemia had returned, Ashley Cain of The Challenge: War of the Worlds started a GoFundMe to raise money needed to pay for what could be life-saving treatment for the infant. In just two days, the fundraiser has raised more than 1.5 million pounds (over $2 million in American dollars), which will be used to pay for the seven-month-old’s treatment and associated expenses.

Ashley, who welcomed daughter Azaylia with partner Safiyya Vorajee in August, shared on social media Sunday that Azaylia will need to travel to Singapore to receive CAR-T therapy plus a haplo transplant “for a minimum period of one year,” as it has been determined that is “the ONLY option to save” her life.

While the amount raised so far may seem high, it will go quickly, as the family could be in Singapore (and unable to work) for a year. Plus, the treatment itself is very expensive, according to Ashley.

“This treatment and associated expenses will be in excess of 1 million pounds with an initial deposit of £500,000 just to be accepted into the hospital and onto the program.”

“Because of the aggressiveness of Azaylia’s disease, we don’t have time on our side and we may have to fly out within a matter of weeks,” Ashley wrote.

The former Ex on the Beach UK star asked fans to share the post and “help us to save our beautiful daughter Azaylia.”

“ … she has inspired not only us as her parents but so many other people around the world,” he added. “If you have been following our journey you can see that she shows us all everyday how much she loves life and wants to be here!”

Azaylia was diagnosed with AML Leukemia at just eight weeks old. At the time of her diagnosis, she “had a frighteningly high leukemia count plus tumors in her spleen, stomach, lungs and kidneys,” the GoFundMe created by Ashley and Safiyya explains. After being put into intensive care, Azaylia went on to undergo two rounds of chemotherapy “with very little side effects.”

Ashley has documented his daughter’s fight against the aggressive cancer, posting to social media frequent updates for his followers.

Consultants informed the couple that their daughter would need a bone marrow transplant to save her life – a challenge, “due to Azaylia’s dual heritage.” Thanks to a social media campaign, not only was Azaylia able to find a donor, but more than 80,000 individuals also stepped forward to register as donors themselves.

As Azaylia prepared for her transplant, she underwent her third “and most intense round” of chemotherapy, and despite being in “the poor risk category for transplant success and the high risk category for fatal complications,” she made it through the process. Unfortunately, after Azaylia’s transplant, traces of leukemia were still found after a bone marrow test.

“However, consultants thought we still may have one option which was to wean her off her cyclosporine medication in order to give her donor cells a boost to fight off the remaining leukemia in her body,” Ashley and Safiyya explained on the fundraiser page. “After a month of doing this and a repeated bone marrow test a few days ago, we found out that Azaylia’s leukemia had rapidly multiplied and she had gone into full relapse. Overnight we packed Azaylia’s things and returned to the hospital for urgent treatment.

“She is currently undergoing her 4th round of chemotherapy to try and bring her disease into remission.” 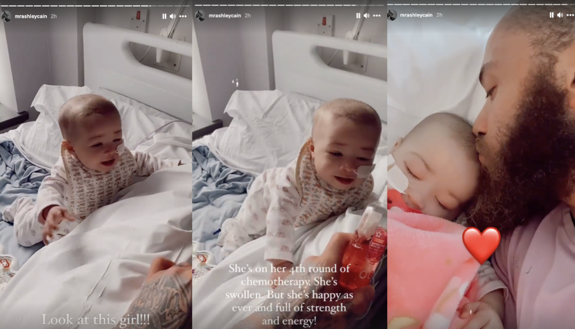 The couple said the next step will be seeking treatment in Singapore and by Monday morning – about 24 hours after announcing the GoFundMe – nearly £1,500,000 had been raised to help with those costs. 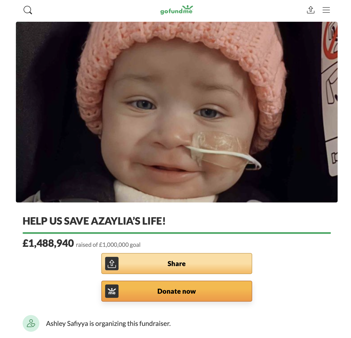 Ashley and Safiyya shared with contributors that they plan to donate “any extra money to other children and their families in the same situation as us – we pledged to give back to this community from the moment we were thrust into it and that is something we will always honour.”

Since hitting (and ultimately exceeding) their fundraising goal, Ashley and Safiyya provided an update that they are now able to start the process of preparing for Azaylia’s treatment, which will include another bone marrow test on Wednesday, a lumbar puncture to collect samples of cerebrospinal fluid and blood tests to be sent to Singapore to create a CAR treatment for the seven-month-old. 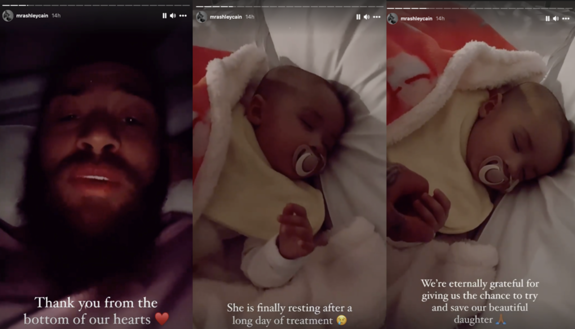 In addition, Ashley shared that he has organized a charity bike ride to honor the battle Azaylia “and all childhood cancer patients are going through,” in which he, his brother and his dad will cycle from Birmingham Children’s Hospital to London “with the support of Safiyya and Azaylia cheering us on over Zoom call from the hospital.”

“The 150 mile ride will be grueling both physically and mentally but nothing compared to the challenges Azaylia and other Likkle Lions alike face on a daily basis,” Ashley said. “… No parent or child should have to go through this experience, and we know first hand how difficult and devastating this process is. So our aim for this bike ride is not only to help my daughter get the treatment she needs, but have enough money to support the families that will be following us which may not have the network or support that we have.” 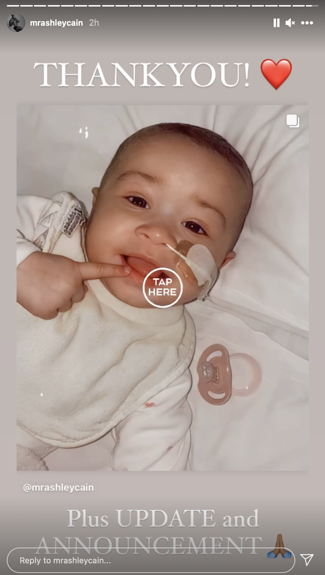 So far, the top donation has come from “Pretty Little Thing” CEO Umar Kumani, but several of Ashley’s ‘Challenge’ co-stars, including Johnny Bananas, have also donated and shared Ashley’s fundraiser.

For more information or to contribute to the GoFundMe for Azaylia, click here.