Production of a new NBC reality show turned crappy just a week before the show was due to finish up its filming.

According to The Wrap (which was the first to report on the literal s**t show), the Ultimate Slip ‘n’ Slide had its production paused indefinitely after more than 40 crew members became violently ill with what one bystander called “awful, explosive diarrhea.”

The witness claimed that people on the Simi Valley, California, set were “collapsing” and “being forced to run into Port-o-Potties.”

(As if this craptastic situation couldn’t get any more awful, try to picture what it would be like hunkering down in a Port-o-Potty at a ranch in Simi Valley, which had temperatures in the 80s when this went down.)

The Wrap reports that a crew member tested positive for giardia, which the CDC website describes as “a tiny parasite (germ) that causes the diarrheal disease.”

“Giardia is found on surfaces or in soil, food, or water that has been contaminated with feces (poop) from infected people or animals.” 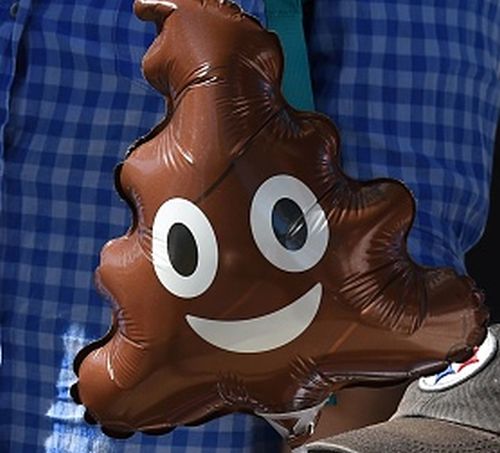 Samples from the water at the ranch— the water truck, the slip ‘n’ slide pool, a well and the restroom sinks– were tested by a lab that was cooperating with the counties’ health departments, and all tested negative for giardia. However, additional testing results that came back Thursday showed that the area around the set did test positive for giardia.

Given that a nice chunk of the show’s crew was doubled over with doo-doo problems, the production company behind the show– Universal Television Alternative Studios— has decided to move production of ‘Ultimate Slip ‘N Slide’ to a less-crappy location.

“The health and safety of everyone on our set is our number one priority, so out of an abundance of caution we have made the decision to stop production of ‘Ultimate Slip ‘N Slide’ at the current location,” a spokesperson for the company told People. “We are in the process of determining next steps in order to complete production.”

‘Ultimate Slip ‘N Slide’ will take the classic Slip ‘N Slide toy and transform it “into a real-life water park full of gigantic slippery rides with the chance to take home a big cash prize,” according to a press release from NBC.

“Featuring pairs of siblings, best friends, couples and co-workers, teams from all walks of life will compete in multiple hilarious rounds of games, including Human Pong, Body Bowling, Cornhole, Bocce Fall and many more,” the press release reads. “The two teams that make it to the final challenge will take on the Big Slipper, a colossal multi-part slide meant for only the bravest and boldest players as it determines who will earn the title of Slip ‘N Slide champion and take home the cash prize.”

The show will be hosted by former Saturday Night Live star Bobby Moynihan and comedian Ron Funches. The Wrap reports that Bobby and Ron were not part of the group afflicted with the poop parasite and are “healthy and fine.”

The show was/is due to premiere on Sunday, August 8 after the Olympics Closing Ceremony; however, it is unknown if that is still the plan, given the current defecation situation.