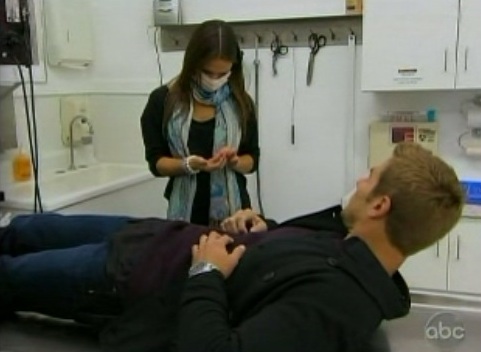 Home is where the scalpel is….

It’s hometown date week on The Bachelor! This is by far one of The Ashley‘s favorite weeks, because she loves to see where these girls come from. Even though they’re blubbering drama queens on TV, there’s no way they are actually like this in real life…right???

Anyway, we start in New York City, with Brad all dressed up in his mod threads: peacoat and newsboy cap. (It’s the first time he actually looks kind of hot.) Brad talks about each girl in detail. We see flashbacks from their fun times. First, he discusses how he can totally see Chantel O. being his wife. (Here’s my thought on this: if you’re still calling her “Chantel O.” you probably shouldn’t propose to her. Just sayin’.) He talks about how wonderful she is. Then he talks crap on her and says that she’s too jealous and needy.

Next he discusses Ashley. He says he loves her bubbly personality and how fun she is. He said he can totally see her being his wife. Then he talks crap on her, complaining that she’s too insecure and that her jealous outbursts creep him out.

Then he talks about Shawntel. He says he likes her because she’s not dramatic and never gets all needy on him like the other girls.

Then he discusses why he is so infatuated with Emily. He loves her personality, but then says that he’s not sure if he’s man enough to “break through” Emily’s wall. (Ugh….I bet he got that phrase from his therapist.)

Anyway, Brad’s first trip is to Seattle to visit Chantel (no O) They meet up for a casual chat in the park. Brad exclaims that he “loves this city.” However, he’s quick to remind Chantel that it doesn’t matter because whatever girl he picks is moving to Austin to be with him. Gag. First, we get to see Chantel’s apartment. We learn while here that Chantel is the kind of person that makes her dog wear sweaters. Sigh. We also get to meet her cats and it looks like&nbsp;Brad is overwhelmed by all of Chantel’s furry friends. 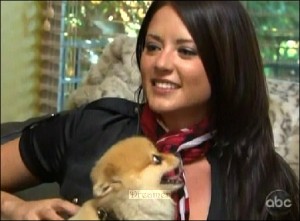 Boca says, “Hey Chantel, are you gonna tell him how loaded we are?!

After that snoozefest, we get to move on Chantel’s parents’ house. By house I totally mean ginormous mansion. You could literally park the state of Vermont inside these people’s foyer. The place is huge!

I’m surprised to find out that Chantel’s parents are Donny & Marie Osmond. (OK, not really, but seriously her mom and dad are dead ringers. Perhaps they made all their money performing in a celebrity impersonator show?) Both of the parents are really, really good looking. At least Brad knows that if he picks Chantel, her looks won’t go to hell. (As long as there’s a plastic surgeon within 100 miles, that is!)

Chantel’s dad has a heart-to-heart with Brad. They’ve known each other for about 10 minutes, so Brad feels like it’s time to bust out his “I Have Daddy Issues” talk. Chantel’s dad shows deep concern while Brad is talking. (However, his face is permanently frozen due to the Botox so he pretty much has the same look on his face the whole time.)

Meanwhile, Chantel and her mother are discussing Brad and the possibility of having a wedding. They both seem excited. (Again, hard to tell because I was distracted by the mom’s huge Restylane-packed fish lips. Why do people do that to themselves?!) The parents give the couple their blessing and we bid adieu to Donny & Marie. Say “hi” to the rest of the Osmonds for us!

Brad tells Chantel he really sees a future with her trust fund…er, I mean her. He says Chantel is the kind of girl he “could totally see himself with.”

Next it’s off to the boonies to meet up with Ashley’s family. They live on the border of Canada and Maine in  a town where a lot of people speak French. This won’t be good for Brad; he can barely keep up with people when they’re speaking English.

Brad pulls up to meet Ashley (LOL at the guy sleeping in the car next to where they’re talking in the park.) Brad tells Ashley that he “loves this city.”

They go to a restaurant that Ashley used to work, and it’s clear that Brad’s intimidated by the French-Canadians. He tries to show some local color and speak French, answering “Si” when the waitress asked him a question. Oh, Brad, thank you for being so stupid. You make it so easy for me. Ashley has become one heap of giggles by this point and her bubbly personality is really starting to annoy me. Hopefully she simmers down once she gets around her family. 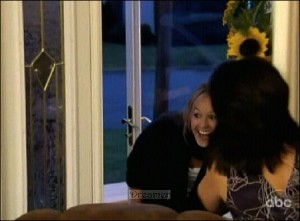 They go pick up some lobsters and head to the house. Unfortunately, we find out that Ashley’s family is just as giggly as Ashley is, if not more so. Her sister is almost unbearably perky. They sit down to dinner and Brad is attempting to talk to the family while trying to eat a lobster the size of an elephant. (Seriously, that thing was a sea monster.)

Brad talks to Ashley’s dad and asked whether or not Ashley wants to have kids. (Um…shouldn’t you be asking her that and not her dad?! That’s kind of weird, isn’t it?) Ashley and her mother discuss Brad while lounging in the bedroom. They are so happy they will need to be shot with a tranquilizer to come down after this night.

Brad says goodbye, mentioning that Ashley is “the kind of woman he could totally see himself with.” Is it just me or is anyone else having deja vu?!

Next it’s off to the lovely and magical city of Chico, California for Shawntel’s hometown date. We get to see the commercial for Shawntel’s family’s funeral parlor. (Half of America was totally confused by that. They thought the TV had somehow switched channels on them.) I feel bad for Shawntel. The producers were douchebags to her. All the other girls get to meet up with Brad in a park or something, but they make Shawntel meet him in the freaking cemetery. You know that was  not her idea. They totally wanted to make her seem creepy. 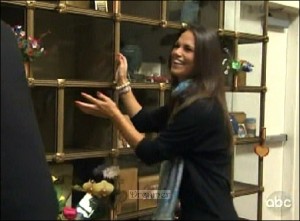 “There’s plenty of room for you, Brad.”

Despite the eerie surroundings, Brad busts out his trusty “I love this city” line.  She counters that with “So…do you want to be cremated?” Then she shows him the crematory.

Honey…I’m no expert at relationships, but I do know that telling guys that you burn bodies for a living probably won’t score you any points. She then brings him to the embalming room and Brad hops on the table. Why, why why WHY must we do this?! Shawntel starts talking about veins and blood and scalpels and Brad’s eyes are getting wider and wider. She tells him exactly how she could embalm him.

Brad tells Shawntel that he’s getting scared and doesn’t want to see a dead body or anything. (Don’t worry, she saves that for after she’s engaged.) Brad says he doesn’t handle death well. This isn’t looking good for Shawntel…

It’s time to meet the Adams Family. The family looks surprisingly normal (in fact, she has two really hot blonde sisters.) I kept looking around for a creepy Uncle Fester-like character roaming around the house but I didn’t see any. Maybe they keep him in the basement?

Shawntel tells her dad that she made Brad lay on the table. Her dad laughs and says, “No rose for you!” Um…yeah, pretty much.

Anyway, her family’s very upset when Shawntel tells them that she is going to ruin the plans for her to take over the family business so that she can move to Austin to live with some guy she met a few weeks ago. Understandable. Her dad tells her that Chico needs her and that it was really crappy of her to not be here a few weeks ago when a friend of the family died and needed to be embalmed. Yes, we are really listening to this conversation.

This hometown trip has really sealed the deal for Shawntel. She’s totally going home. Unless Emily literally takes a hatchet and attempts to murder Brad, there’s no way Shawntel’s going to stick around. She throws out an “I love you” in a desperate attempt to stay, but it’s too late. Let’s face it: if you threaten to embalm a guy, there’s no going back.

With that, it’s finally time for Emily’s hometown date. First, we have the touching reunion between Emily and her daughter Rickey. She tries to explain to the kid who her “special friend” is. Brad arrives bearing gifts (good call). He tells Emily “he loves it here.” (Seriously?!) 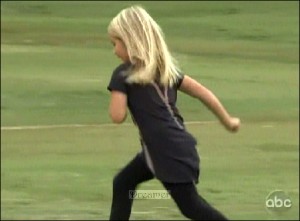 “This guy is boring as hell…

The daughter hasn’t uttered two words since she met Brad, making it awkward for Emily, Brad, the producers and us at home. Brad tells us that he’d love to be a father figure to Rickey. Um…let’s slow it down, there, Brad. Get the kid to talk to you first and we’ll go from there.

Emily tells Brad that Rickey really likes him. Apparently, Emily’s talking about a different Rickey because the one we’re all seeing has no use for Brad whatsoever.

She eventually starts talking to Brad, but it’s time for bed. Brad helps tuck her in and then heads downstairs to be alone with Emily. However, he’s feeling awkward getting down with Emily while her daughter’s asleep upstairs. Emily tells him to sac up and kiss her. He doesn’t (of course), so she kisses him herself.  The whole date is just pitifully awkward and it seems like Brad can’t get out of there fast enough. Maybe Shawntel has a chance after all…

We’re back in New York and Brad is chatting with Chris Harrison. He tells Chris that “he loves this town” (O-M-G, is there a town you don’t freaking love!?)

At this point, there’s only 10 minutes or so left in the episode so whoever’s heart he breaks, he’s going to do it fast.

Chantel is looking pretty rough. She’s chosen a lopsided bun/unflattering red dress combo that had half of American wincing. The whole thing needs to go.

The first rose goes to Ashley. The next one goes to Emily (very surprised on that one.) It’s down to Chantel and Shawntel. (Maybe Brad changed his mind on Chantel after seeing her in that cocktail party get-up?!)

He gives the rose to Chantel, giving Morticia Adams the boot. Back to Chico for you.

The lesson learned tonight: never put your date up on embalming table, and don’t show him your scalpel.

Next week is…South Africa!! There’s going to be some rumbles in the jungle!!!

**Screen caps for this post came courtesy of www.Jokersupdates.com . Keep up the good work over there kids!