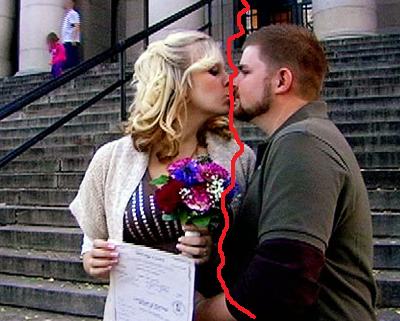 March right back up those stairs and get your divorce. Save yourself the trip back to the courthouse.

Well I for one am shocked that this didn’t last.

16 & Pregnant Season 2.B (or whatever they’re calling it these days…basically, last season) alum Aubrey Akerill announced today that she and baby-daddy Brandon are getting a divorce.  Of course, with political uproars, earthquakes and turmoil going on all over the world, this is hardly front page news. But for us idiots who can’t get enough of these Teen Mom chicks, this is big news! (We’re pathetic, we know. You should move past it. We have.)

Anyway, you probably don’t remember which trainwreck Aubrey is, so let me recap for you. She was the chick that dropped out of high school to move in with her older (but not more mature) boyfriend. They got evicted (as you do) and were forced to move in with Aubrey’s grandma. Granny was not so cool with the arrangement, and freely admitted that babies creeped her out. Mee-Maw (as she is called) is on oxygen and has enough to worry about and doesn’t need a baby and two underage moochers draining her social security check! 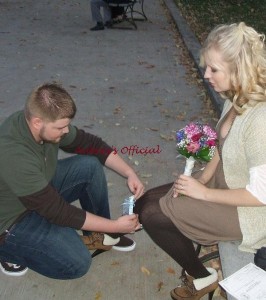 How could you forget those boots!?!? This is their wedding day. No, seriously.

The couple ends up going to the courthouse to get married. She wore some horrific Little House on the Prairie boots. After they’re married Brandon tells Aubrey that she’s going to be a housewife. Aubrey tells Brandon he can go to hell. And so it begins…

Now do you ‘member?  Well, they’re getting divorced. She posted this on her Facebook fanpage tonight:

Brandon & I are no longer together, we are simply just friends. You will see more on the follow up…

The couple barely made it a year. She’s not the first 16 & Pregnant alum to file for divorce. Christinna (also of Season 2.B) filed for divorce from her husband Isiah in November. (He’s the one that gave up his football scholarship to be close to her. Sucks to be him right now.)

I have a feeling that Aubrey and Brandon won’t be the last of these kids to head to divorce court. My money’s on that couple from last season who moved into a barn to divorce next.