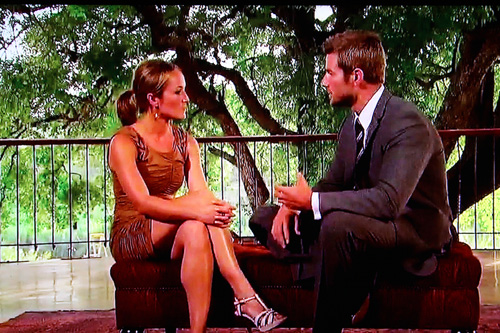 It’s Bachelor time! This is serious now, no f**king around: we’re down to the Final 3 girls, which is infamous for being the date that the girls must “put out” to “stay in” the game and continue to compete for Brad‘s heart. With the infamous “Fantasy Suite” night looming, the tension is running high in South Africa.

Brad boards the plane to head out to South Africa. We see that ABC has sprung for the first class ticket for their Bachelor. I’m sure he just charmed the hell out of those flight attendants for that 18-hour flight. Perhaps he used some of his proven small-talk skills to entertain them?

Brad uses the long flight to recap his feelings for his final three: Chantel (no ‘O’), Emily and Ashley. He talks about why he is falling in love with all three of the women. He says his relationship with Chantel is a giant rollercoaster. (The producers show a montage of Chantel bipolar-ly swinging from happy to sobbing to demonstrate this.)

He says he loves Ashley’s extreme energy, which is basically just a nice way of saying that she needs to be tranquilized at times. Seriously, that chick is annoyingly perky ALL.THE.TIME. (The producers show a clip of Ashley screeching like  monkey at various times during the season…oh wait, she was laughing.)

Finally, he says what we viewers have known all along: that Emily is one-in-a-million, but her past (and the fact that she has a 5-year-old that pretty much hates him) freaks him out.

Naturally, Brad’s got to start off his trip by saying what he says in every freaking city he’s ever been to: “I love this city.” Of course you do. You love any city that you get paid to be there and have hot women swoon over you. Honestly, I think he says that because he has nothing better to say.

Brad says he’s really looking forward to getting to spend some intimate time with the women (i.e. bang them each individually, and hopefully in some sort of group setting later on.) I hope he packed his Trojans. Surely Michelle gave him at STD when she mauled him earlier in the season, and we don’t want him spreading it to precious butterfly Emily. 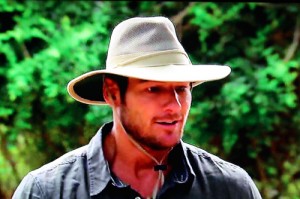 The first day is Chantel’s date, and Brad’s sporting an Indiana Jones safari hat. I’d make fun of it, but I have to admit: if I were in South Africa on safari, I’d totally be dressed in douchy Indiana Jones clothing too. I think that’s part of the package. They head out on the safari and Brad says he’s excited to see some South Africa bush. (Geez, Brad. Save the dirty talk for the Fantasy Suite, will ya?)

They coo at the lions and the giraffes, and Brad, who is obviously very well-versed in nature, informs us that “South Africa is their home.” Noooo….really?! I thought they were flown in from Detroit. Good lord. I seriously need to start getting all of Brad’s stupid one-liners on soundbite so I can enjoy them again and again.

They sit down for a picnic lunch, and Brad randomly asks Chantel if it’s weird that he misses her family. Um…yah, that’s really f**king weird, but thanks.

Later that night, it’s time for a dinner in the brush. Brad tells Chantel that he’s most comfortable around her and that

Brad Womack is a walking book of cliches, I swear.

Chantel plays the creepy card and blurts out that they should just get married right now. This, of course, makes Womack start to freak out. He is constantly wringing his hands and is starting to sweat. Even though he says he likes her “boldness,” you can tell that he’s totally nervous that producers will really make him go marry her in some weird Swahili African ceremony. 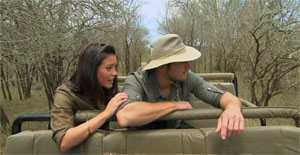 “Hey…is that Michelle over there in the tree?”

To escape the awkward moment, Brad presents Chantel with the Fantasy Suite card and asks if she’ll join him for the night. Um…did you even have to ask? She’d probably get naked right there on the dinner table if she thought it would keep her around. But Brad has a surprise for her: they’ll be spending the night in…wait for it…a tree house! It’s actually not even a house, it’s actually just a plank of wood, a bed and some mosquito nets. She tries to sound excited, but you know she’s probably thinking about how it’s going to be hard to look sexy with all those African mosquitoes biting her! (Not to mention all the producers watching as they hang from nearby trees!)

It’s time for Brad’s first rumble in the jungle. We don’t get to watch, of course; however we are treated to some animal jungle noises to help us understand what’s going on up in the treehouse.

The next day, after Brad has hosed his loins from his tree house escapades, he’s ready to go on a date with Emily. She runs to great him, and then Brad says he forgot something and runs to fetch it. (Perhaps he forgot to put his boxers back on after his night with Chantel?)

Nope– it’s actually an elephant. Emily and Brad spend the day riding Tembo, the adorable elephant. (The Ashley is sooo jealous!) While Tembo goes off to take a dip in the lake, Brad and Emily take a stroll and chat. The conversation shifts (of course) to Emily’s daughter. Brad busts out his Line of the Week: “I really miss your daughter.” Creepy. 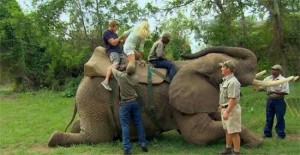 Emily, who isn’t fooled by his lame attempts to suck up to her, asks him straight out if he’s ready to take on a 5-year-old. He answers with a very unconvincing “yeah,” but then launches a sappy speech and even gets teary-eyed. That ought to get her into the treehouse later tonight, he thinks.

It’s time for a commercial break. Did anyone notice that the girl on the Android phone commercial (the one that’s sitting in a tree stalking a guy) looks JUST LIKE creepy Michelle? Coincidense that it’s being played during the Bachelor? I think not. Good play, ABC.

It’s dinner time, and Brad soon starts to get flustered and sweaty again, as he tries to ask Emily questions but is too nervous to speak to her. Just when it’s getting too awkward to watch, Brad busts out the Fantasy Suite card. Emily says she doesn’t think she should since it will set a bad example (aww) but finally agrees to go. I think she was afraid she’d get stuck in a tree house with Chantel’s sloppy seconds. Brad’s face literally lights up when she agrees to go. It was kind of cute. He looooooves her, it’s so obvious.

Luckily, Emily gets an actual room. With a roof. And walls. (I wonder if poor Chantel got stuck in the treehouse for the rest of the trip!?) In the suite, Emily tells Brad she’s falling in love with him. Brad shocks viewers by saying he’s falling in love with her too. Are Bachelors even allowed to do that? I don’t recall any of them every saying that before. I think Womack broke the rules! 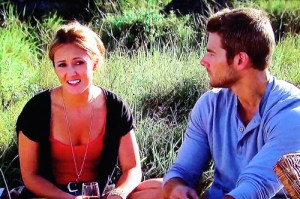 The next day is Ashley’s date. Brad’s trying to muster the strength to keep up with Ashley (hey, he just exerted himself two nights in a row in the Fantasy Suite, give him a break.) They walk through a clearing and see….a helicopter! OMG! (You didn’t think we were going to get through an episode sans helicopter, did you?)

Ashley literally runs away from the helicopter. (Maybe she’s just as tired of them as we are?) Turns out she’s terrified of them. She screeches in fear about the lack of doors. (Does anyone know why helicopters don’t have doors? I’m actually really curious about that.)

They land and find a nice spot in the weeds to have lunch. Brad, once again, busts out his go-to line “I really miss your family.” Seriously?! Seriously?

Ashley said she wants to have fun, having spent many a weekend at home alone studying. She also says she’s going to pursue her career of becoming a dentist. This worries Brad because 1) he doesn’t want a wife who’s more successful than he is  and 2) He doesn’t want anything to take the girl’s focus away from him. This isn’t looking good for Ashley…

It’s dinnertime and by now we know that Womack’s totally going to cut her. There’s no question. Of course, he’ll probably hit the sheets in the Fantasy Suite with her at least once before he gives her the boot. While at dinner, there’s bugs everywhere and it’s creeping me out. The bugs are in their hair, on their clothes, in their food, distracting my attention to their  deep conversation.

Brad’s getting sweaty again, which means one of two things: either things are getting too serious for him, or he’s very confused. He reverts back to his amazing small-talk skills, and it’s basically a barrage of vague statements, and the overuse of the word “like.” Ashley totally knows she’s getting cut. However, she still accepts his Fantasy Suite card.

Once they arrive in the Suite, things get downright embarrassing. They have nothing to talk about other than the effectiveness of the room’s mosquito nets. Jesus. Let’s just stop this now.

Mercifully, it’s time for the rose ceremony. Brad chats with Chris Harrison and pretends like he doesn’t know who he’s going to cut. Really? Can we just skip this nonsense and get to the end of the show so I can go take my shower, geez. Unless Ashley was a sex demon in the Fantasy Suite, there’s no way in hell she’s staying.

Brad approaches the girls, who are all blushing as they think back to what they did in the Fantasy Suite with him. Brad pulls Ashley away and she knows it’s bad news. Chantel smirks as Ashley is led away to her execution.

He tells her she’s exceptional, and then lowers the boom. He spares her the whole rose ceremony ordeal, which was kind of classy of him actually. He puts her in the Jeep and watches her drive away. Meanwhile, back at the rose ceremony, Emily and Chantel are being eaten alive by African mosquitoes. Can we move this along please?

Brad heads back and hands out the roses. It would have been so cool if one of them had turned the rose down, and the other one won by default.

Next up is Cape Town, where we will get to meet the rest of those exciting Womacks! I can hardly stand the excitement.

Just a note: The Ashley guest-blogged for the website TV Food and Drink about this episode! You can check out the link here. (He has way better photos from the episode over there too!)