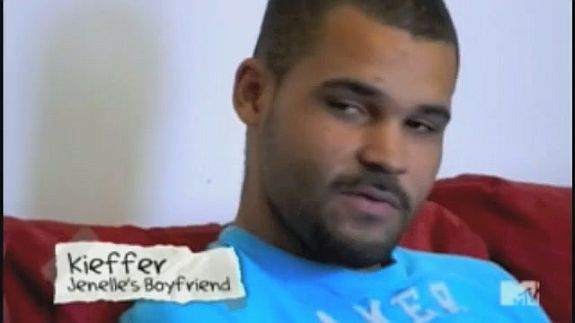 This week’s Teen Mom 2 episode was just HIGH-larious (in more ways than one, thanks to 420 friends Jenelle and Reefer Kieffer.)

Anyway, it was basically just a documentary on how to mooch off of other people’s parents. Chelsea‘s baby-daddy and poor excuse for a boyfriend Adam, as well as Jenelle’s homeless and unemployed boyfriend Kieffer have perfected their mooching craft and are now prepared to go head-to-head to become “The Ultimate Teen Mom 2 Moocher.”

Anyway, this week, Chelsea’s dad Randy starts to press her to press Adam to get a job. You’ll remember that Randy is not only supporting Chelsea, but also her daughter, and up until last week’s episode, Chelsea’s best friend Moochy Megan. And now Adam. I just hope he’s claiming them all as dependents on his taxes. The IRS probably won’t even believe him when he tells them that he supports all of these mooches. I wouldn’t. (Baby Aubree is not a mooch, obviously. Don’t leave me mean comments about it.) 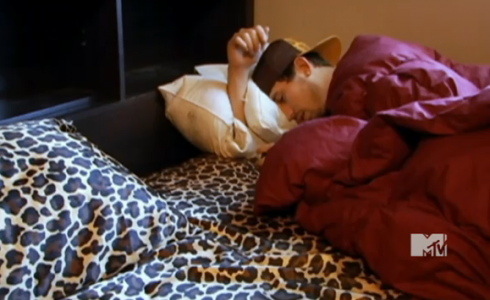 At Chelsea’s insistence, a reluctant Adam peels his lazy ass from the couch that he’s been glued to for the last 72 hours while he played “Call of Duty” on the Playstation. He has to, because he agreed to that ‘contract’ that Chelsea made him sign before he moved in. The contract said that Adam would have to 1) get a job, 2) be nice to Megan (oops!) and 3) not cheat on her ANYMORE.

He’s obviously taking this very seriously, as he heads out to interview at two restaurants sporting his best ripped-to-the-waist tank top and shorts. Who wouldn’t want to hire this sporty winner?

He comes home and reports that he had no luck on the job hunt and that it’s time to take a nap. Surely, he exerted himself out there and he needs to refresh himself to prepare for….school, er…work….er….parenting…er….video games.

Adam has yet to contribute a single cent to pay for his room and board, according to Randy. Chelsea protests and says that having him there is so great because she doesn’t have to beg Adam to hang out with her and her daughter because he, like, is always around. Where do I even start on that one?

Adam is a quality, Grade A Mooch. He’s going to be hard for Reefer Kieffer to beat….

Meanwhile Kieffer and Jenelle have realized that they’re going to have to leave their friends’ parents’ beach house and they’ll soon be homeless. They’ve been mooching off this friend’s parents for a few weeks but now they have nowhere to go. Jenelle is actually starting to show some promise: she’s gotten a job and she is also enrolled and attending college. However, even her salary and student loan check combined isn’t enough to pay rent and feed Kieffer when he has the pot munchies. Kieffer’s going to have to get a job.

The next day, Kieffer supposedly goes out to hunt for jobs. However, there’s no camera footage of his job search. Why? Because he probably never even left the house! He probably smoked a bowl and passed out in Jenelle’s mom’s flower bed for a couple of hours until Jenelle got home.

Finding a job should be a breeze for the Kieff-ster. I mean, who wouldn’t want to hire a dirty guy covered in Band-Aids and pot brownie crumbs? The sky’s truly the limit for him.

Anyway, without any support from Kieffer, Jenelle decides that it’s time to move on to mooch off of her mom, Barbara, again. Only this time she’s bringing a dirty, Band-Aid-covered friend.

She goes to her mom’s house under the guise that she wants to see Jace and then casually mentions that she and her creepy boyfriend need someone to mooch off of for a few weeks. Shockingly, Barbara agrees to let both Jenelle and Kieffer move in. Jesus, I hope she has a lot of Lysol.

Things are going well until one day when Jenelle and Kieffer are babysitting Jace (wait, can you babysit your own freaking kid?) and Jace spills something on the couch and Jenelle and Kieffer decide that it’s probably best to just leave it there. Everyone knows that stains are much easier to remove once they’ve soaked into fabric for awhile. Jenelle moans that “nothing she does is ever good enough for her mom.” Um…yeah, because you don’t do anything.

I understand why Kieffer didn’t clean up the spill, of course. Water is like kryptonite for Kieffer. He couldn’t risk it.

Adam has consistently produced quality mooching for a while. However, Kieffer is a class A moocher, and spreads it around to anyone he can find.

It’s a close race but the judge(s) have made their decision.

And the winner is………………REEFER KIEFFER!

Kieffer has shown that he’s a better overall moocher. He’s had a lot more experience in the mooching field. However, Adam strives to one day achieve Kieffer-level mooching skills!