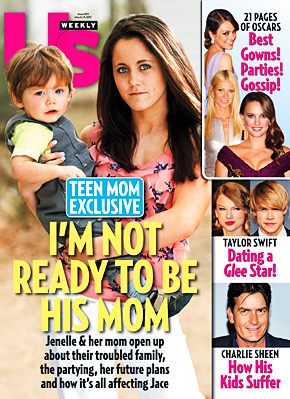 Teen Mom2’s Jenelle, Our favorite white trash Reese Witherspoon, is gracing the cover of my US Weekly this week. Ironically, when my copy arrived, the entire cover had been torn off. I guess the mail man can’t get enough of these chicks either and decided to take it.

Anyway, so this isn’t a tabloid interview; Jenelle and her mother sat down with a reporter from US to talk about their relationship on February 24. This was less than 15 days after their explosive blow-up at each other during the Teen Mom2 finale special.

The funny thing about the article is that they try to make it look like that Jenelle and Barbara have called a truce; however in the article, both Jenelle and her mother say super bitchy things about each other!

The article discusses the living situation over a casa de Barbara. What it doesn’t tell you is that Jenelle had just moved out the day before! She posted this on her Facebook page on February 23:

“F**K YEAH!”, moving into my own place today this is exactly what I needed 🙂

Ooops, I guess the fact that Jenelle wasn’t actually living in the house anymore wasn’t important enough to mention. (To be fair, it is Jenelle, so she’ll probably be back in a month, dragging some other creepy homeless boyfriend behind her.)

At the finale, Jenelle said she was going to move in (mooch off of) her friend Tori and Tori’s boyfriend, which is exactly what she did. (I wonder how the boyfriend felt about that!? He better hide all his snack treats, because Jenelle gets the munchies something fierce, I’m sure!) 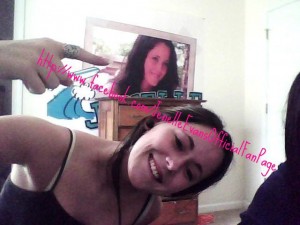 Here’s a photo of Jenelle in her new place…LOL at the wall hanging from the finale in the background.

Another thing that the article “left out” is that things aren’t as rosy over at Barbara’s place as they seem. At the season finale taping, Jenelle revealed that Barbara not only gets in frequent screaming matches with Jenelle, but also with her live-in boyfriend, Mike. (Who Jenelle calls her stepfather.)

Jenelle mentioned that she also resents the fact that she’s being called out for her wild lifestyle (which includes smoking the wacky tobaccy), because Mom Barbara was a wild child herself, it seems!

At the finale, Jenelle brought up a story that she said her sister Ashley heard from Barbara. Apparently, back in the day, our girl Barbara was just as frisky as Jenelle, even travelling across country as a newlywed, trying “every drug under the sun,” according to Jenelle.

Anyway, the article also discusses Jenelle’s relationship with Grade-A Moocher Kieffer. In the article, Jenelle says that they are “totally, completely over.” However, the reason she gives is that finally realized that she couldn’t save him and get him back on his feet.

Um…did the fact that he cheated on you while you were in Los Angeles and then had the chick call you to tell you about it also be a factor?! (You can read all about that story here.)