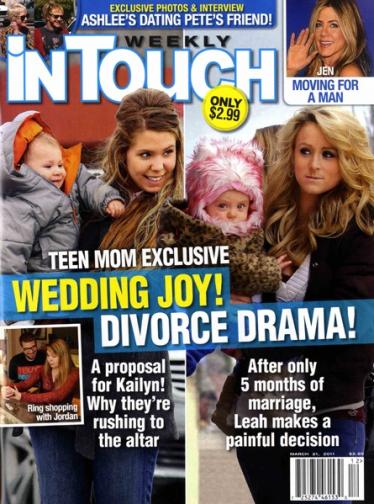 Seriously. I’ve officially put InTouch Weekly on the lowest rung of the totem pole in regards to tabloid magazines. They’re officially below the National Enquirer now.

(Did The Ashley ever tell you guys about her totally creepy job interview at the Enquirer? Remind me to tell you that story sometime!!)

But right now, there’s some important Teen Mom2 news to discuss. InTouch Weekly‘s new cover story is probably its  biggest stretch of the truth since it reported that Clay Aiken was getting married to a chick.

The rag mag that Kail went shopping for engagement rings with her boyfriend Jordan, which is totally bogus.

The Ashley asked Kail (who is a confirmed “Roundup” reader) to confirm or deny the reports for us. She confirmed exclusively to The Ashley that she and Jordan were actually on their way to Home Depot and that they were not on an engagement ring shopping spree when the photo was taken. Sigh.

I highly doubt Kail has time to plan a freaking wedding between school, two jobs and taking care of her baby. Plus, Jordan admitted in Los Angeles that Kail is his first girlfriend….EVER. I don’t think he’d want to move that fast.

Don’t believe everything you read, kids. Remember, if  everything we read in InTouch and these other crappy magazines was true, Angelina Jolie would have a 20-month baby in her tummy (because she’s been said to be pregnant like a billion times in the last two years), and Jennifer Aniston and Brad Pitt would totally be back together.

InTouch Weekly: do better with your gossip digging. It’s pretty bad when the National Enquirer has more accuracy than you. 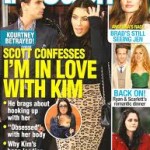 All confirmed to be not true. Just sayin’.