We’re down to the Top 6 on American Idol, which means there’s no more crapping around. The contestants know that one lazy night and they’ll be riding the Ashton Jones train back to obscurity.

Anyway, tonight’s theme was the songs of Carole King. I’m sure when this was announced there was a chorus  ringing out around the country of 14-year-old girls screeching, “how the hell is that?! Kids, go to iTunes and look up Carole’s “Tapestry” album. You’ll wonder why you ever wasted your money on Justin Bieber tunes after hearing it.

First up tonight was Jacob, who chose to sing “Oh No Not My Baby.” I’ve never heard the song before but after watching the clips of his practice sessions, I knew he was going to be taking this straight to the church. The Ashley will get to the singing in a moment, but first we must discuss the bright yellow and blue plaid elephant in the room…that blazer and bowtie. Oh, honey, no. That outfit was more fitting for one of the nerds on Saved by the Bell than a pop singer! (He must have got it at NERDstrom’s….Ok, that was bad. I’ll stop now.)

As for the singing, Jacob worked it out. He was head shakin’, finger pointin’ and gospel stomping all over the stage. Girlfriend was on it tonight!

Next came Lauren, who once again chose an unfortunate dress for her figure. (Why, why, WHY doesn’t this stylist tell her not to wear dresses that make her ass look huge!? Just sayin!) The coaches were encouraging her to take on bigger notes, and The Ashley agrees. She loves it when Lauren pushes her voice. She gets all Kelly Clarkson-esque and sounds so much better.

Naturally, they wheeled out freaking Miley Cyrus again. Seriously, is she contracted to be on Idol at least two times per season or something?! Why does she keep coming to “mentor” these singers? She needs singing lessons herself, for God’s sake.

Scotty sang next, and, after last week’s disappointing performance, he knew he had to change things up. He sang “You’ve Got a Friend” with much more tenderness and much less deep voice than ever before. Idol brought out all the stops to make Scotty’s performance rival Lauren’s in cheese factor. They had everything from the solo guitar player, to the spotlight to the fake smoke clouds forming whimsically at his feet. It was Velveeta central! 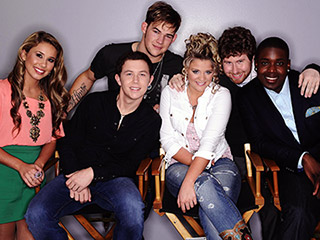 He sounded better than he has in weeks, but I’m still waiting for the day where he sings “his song” from the audition rounds. If he did it, I’d bet he would get the most votes by far. They better have him lined up for the finale to sing this song!

James also showed his softer side. He chose “Will You Still Love Me Tomorrow.” The Ashley love, love, LOVES this song and she must admit that she loved James’ version of it. Tonight was James’ Adam Lambert “Tracks of my Tears” moment. He brought down the house and proved that he doesn’t need to burn down pianos or hire the Compton High School marching band– he can sing the beJesus out of any song he picks.

Casey came next. I know I’m going to get some backlash for saying this but I think Casey is past his expiration date. I know all the judges say he is a musical genius, etc. etc. but I’m tired of hearing him. The only time I really enjoyed him tonight was when he was singing with Haley in the duet. I’m not even sure what he sang because it bored me after about a minute. Needs to go!

Haley got the orgasm closing spot tonight, and once again she delivered a smashing performance. The song was suited perfectly for her voice (she certainly has a knack for picking good songs, minus the Blondie song, of course.) I’m sure she’ll be in the Bottom 3 tomorrow night, but certainly not because she deserves it. I love this chick and she, by far, has one of the most unique voices of any of the singers from the last two seasons of the show.

Tomorrow is eliminations but that’s not why The Ashley will be watching. (Well, she’ll be watching because she has no life, but that’s beside the point.) She’ll also be watching because Crystal Bowersox will be performing!!!!!! The Ashley has been tracking Crystal’s career since last season and is so happy she gets to come back and perform. You guys will LOVE the song she’s going to sing. I sing along to it on my iPod at least three times a day!!!

Who does The Ashley think will go home tomorrow night? I hate to admit it, but I think my adorable little Jacob will be hitting the road. I think Haley and Casey will join him in the Bottom 3.