James went on the show partially to be able to pay for diapers and other necessities for his son, Hunter. James won our hearts during this year’s ‘Idol’ by constantly proclaiming his love for his son and fiance. Women of America melted when James sang a song dedicated to his family and got visibly choked up just by talking about his love for his son.

Gary has been off-and-on with his baby-mama, Amber Portwood for the last two seasons of ‘Teen Mom.’ However, his love has never wavered for his baby daughter, Leah. He’s constantly been a stable front in her life. Plus, any man who’s willing to dress up as the Easter Bunny to make his daughter happy deserves a spot on this list. 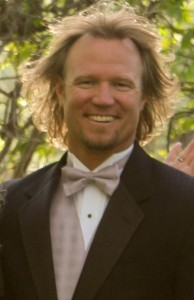 Say what you want about his marriages, but this guy loves his kids (all 159 of them). His main concern during the last season of ‘Sister Wives’ was keeping his family and all his kids together in one place. He is always shown trying to make each child feel special, and that’s no easy task!

Not only does he have to keep four women happy, but he also has to care for and support all those kids, and he seems to be doing it well.

5) Derrick Kosinski (Real World/Road Rules Challenge): Derrick won our hearts many seasons ago on The Challenges by being the “nice guy” and always striving to do the right thing. He was a little guy, but had more heart than most of those conceited oafs he competed against.

He hadn’t done a challenge in a long time, when he became a father, he knew that he needed to support the child, so he joined up again. He made it clear that he was only there to support his kid and didn’t want any of the drama associated with the show. The loving way he talked to the other contestants about his child was heart-warming.

Now I must admit, my feelings for Michael didn’t start out so warm and fuzzy. When he missed the birth of his first child so that he could go to Hollywood Week on ‘American Idol’, I thought he was so selfish. However, I later saw that he knew this was his shot to support his family and he had to do it. Once the baby was born, it was amazing to see his face light up when he talked about her. She was ever-present at the shows and you could tell he just loved being a dad. It was great to see such a big strong man fall to pieces over a little baby. 2) Tyler Baltierra (16 & Pregnant, Season 1): On The Ashley’s list of Top 5 Mothers, she included Tyler’s fiancee, Catelynn Lowell, so it’s only proper that Tyler be included on the Father’s Day list. In a sea of young, ridiculously selfish and immature deadbeat dads on “16 and Pregnant,” Tyler stood out like a shining star. He, like Catelynn, grew up with a less-than-perfect home life.

Despite this, Tyler and Catelynn were level-headed and smart in their decision to place their baby up for adoption. The way Tyler handled the whole thing, being so supportive of Cateynn and doing what he knew was right for the baby, was amazing. His maturity level at only 17 was astonishing. His love for his daughter was so great that he sacrificed his own feelings for her own good.

1) O’Neal  (The Biggest Loser): If O’Neal’s love for his daughter, Sunshine, didn’t warm your heart, you’re probably a cold-hearted troll. O’Neal went on ‘The Biggest Loser’ last season because he wanted his daughter to feel good about herself. He was constantly encouraging her, even sacrificing himself when they both fell “below the yellow line” so that Sunshine could stay and continue to lose weight.

In an interview afterward he said, “I was a father first and a contestant second. Falling below the yellow line with her and having to leave was a bittersweet thing. Bitter was the fact that I had to leave; sweet because it was me instead of her.”

Of course, the most incredible display of love came before this, when, during a challenge, the contestants had a chance to win a brand-new car. In one of the most brutal challenges yet, O’Neal screams and howls through wind and rain to win that car for his daughter. When he does, he promptly hands the keys to his daughter. That guy nearly killed himself so his daughter could have a new Mazda.

Happy Father’s Day to all the non-deadbeat dads out there!