The Ashley just found out that her favorite WeTV show, Downsized, is coming back! She was so worried that she had seen the last of the Bruce/Ramsey clan, but luckily, this is not the case. Todd, Laura, and their brood of children will be back starting August 9!

There will be 10 new episodes! Laura Bruce confirmed to The Ashley exclusively that the family will be doing a live chat session with fans on August 9 (at noon CST time) on the Downsized Facebook page.

In case you’re not familiar with this awesome show, it follows a blended family that is struggling with money problems. They’ve often been compared to a modern-day Brady Bunch, as both parents brought kids from previous marriages and made one family.

Like the Bradys, who were living large thanks to Mike’s cushy architect job, the Ramsey/Bruces were living the good life at one time. Then Todd’s construction company took a dive with the economy and now they have dumpster dive for recyclables and give up Starbucks. Oh, the horrors of lower-middle-class living.

Imagine if Marsha Brady had had to buy second-hand polyester plaid pants, or if Greg Brady had to bust out his Johnny Bravo gear and sing outside the 7-11 for spare change! 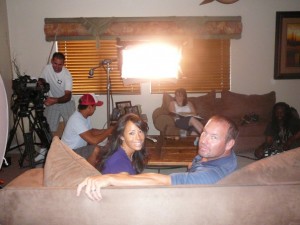 Anyway, fans of the show may remember that when we last left off with the family, Todd was contemplating moving from Arizona to Minnesota for a position.

So what’s happened since then? Well, it looks like Todd did not take the job because the family appears to still be living in Anthem, Arizona. Todd is still running a construction/landscaping company, Stone Canyon Construction.

Daughters Bailey and Heather were both trying to figure out a way to afford going to  Arizona State University when we last saw them. Evidently, that didn’t end up happening, as Heather is currently attending Glendale Community College and working at the mall. (Nothing wrong with that! The Ashley worked her way through college!)

The Ashley is stoked! Will you guys be watching the new season of ‘Downsized?’

Update: Click here to watch a sneak peek of Season 2, courtesy of Laura Bruce (who’s a fan of the Roundup!)