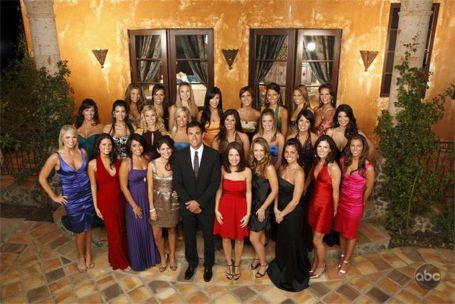 The Ashley has been a faithful viewer of the Bachelor/Bachelorette franchise for years. Season after season, she watches as the contestants on the show frolic in exotic locations, drink champagne and basically have one giant hot tub party.

But is being on the show really as fun as it looks? The Ashley talked to past contestants (and dug up quotes from the cast from various interviews) to find out!

Here are the answers to all of the questions that are swimming around in your head while you’re watching the ‘Bachelor’ or ‘Bachelorette!’ 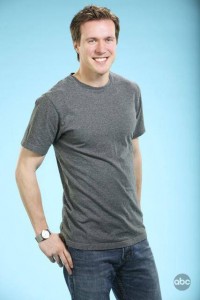 Q: How do people actually get on the Bachelor/Bachelorette?

A: Brad Seberhagen (from Jillian’s season of the Bachelorette) talked about how he got on the show during an interview with The Ashley.

“I’ve heard that they have tryouts, but in my case, I was working in  downtown Chicago in the financial district. I had a desk in the window of a very busy street with lots of foot traffic. A casting director from ‘The Bachelorette’ happened to walk by outside and saw me. He came into my office and said, ‘Do you want to be on a TV show?’ I said, ‘Sure, why not?’ It all stemmed from there.”

Ashleigh Hunt, who competed on Jake’s season of the ‘Bachelor,’ was cast differently.

“I was nominated through the website under the online submission section,” she said.  “My friend did it as a joke after too much wine and a bad break up” 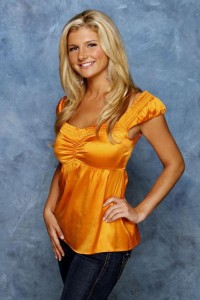 Q: How are the contestants able to get off of work for so long to compete on the show?

A: Ashleigh Hunt told The Ashley that, “Many girls quit their jobs to come on the show. Some were not as invested into their job so it was not a big deal. I am so lucky to work for an amazing company where the CEO supported my decision to take off and do this,” she said. “I am very invested in my company and career so that was a major factor. If they said no, I would not have gone on the show.”

Q: Do the girls get paid to compete on the ‘Bachelor?’

A: “Not one single penny,” said Ashleigh Hunt. However, the Bachelorette/Bachelor is paid a hefty sum for starring on the show.

Q: Do the girls have to bring their own dresses or does production supply a wardrobe for them?

Ashley Spivey from Brad’s season offered even more detail on the Bachelor girls’ wardrobe in her interview with Reality TV World.

“As far as dresses and things like that…I have a really good friend in the city who works for a designer so they actually gave me 14 dresses to take with me on the show,” she said. “And then I had other friends [who gave me great dresses] so I took 22 dresses with me on the show and I’d say I had about that many pairs of shoes as well.” 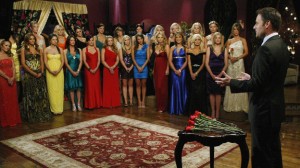 Q: Do the girls on the ‘Bachelor’ have a hair and makeup team working on them for each episode?

A: “We do offer makeup and hair for the first couple of rose ceremonies but many just do their own,” Chris Harrison said on Twitter. Even the girls that star as the ‘Bachelorette’ don’t have it as easy as everyone thinks.

“I didn’t always get my hair and makeup done…only on rose ceremonies,” former Bachelorette Ali Fedowtsky said on Facebook.

On some seasons, the girls have gotten lucky and had a hair or makeup artist cast alongside them that helped out.

Ashley Spivey of Brad’s season said in a post-elimination interview with OMG Yahoo that Michelle Money helped the girls a lot with their hair.

“She was really generous about helping other people and then, yeah, we all did our own makeup,” she said. “Before I went on the show I went up to a makeup counter and asked them how should I put on makeup if I’m going to be on camera, because obviously you have to do it heavier and use different products.” 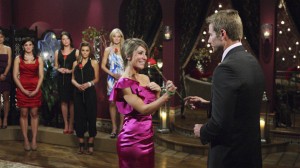 Q: Does Chris Harrison know who the Bachelor/Bachelorette is sending home before the Rose Ceremony or does he find out when the guys do?

A: Chris has said on his Twitter that he finds out before the elimination actually happens, so he knows ahead of time who is getting the boot.

“We always know. He decides who is staying, and we usually decide the order they’re called in just for more drama,” he told Entertainment Weekly. “At any point, he could be like, ‘’I’ve changed my mind.’’ Then he would stop and tell the producers, and we’d deal with it.” 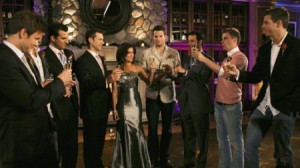 Q: What are those rose ceremonies really like? How long do they really last?

A: Brad Seberhagen, who competed on Jillian’s season of ‘The Bachelorette’ revealed to The Ashley that going to those ‘Bachelorette’ cocktail parties isn’t really as cool as it seems.

“The cocktail parties are overall horrible, but they do have brief moments of awesomeness,” he said. “First of all, we have to get ready all day. As a guy, it doesn’t take that long to shower and get dressed. So we are sitting around forever, trying not to get our clothes dirty, and waiting until they bring us into the mansion. Meanwhile our nerves and anxiety levels start increasing.

“There’s a ton of booze sitting there in front of us, and it takes a lot of discipline not to pound alcohol to cool the nerves,” he continued. “When we finally get into the mansion, we’re at the mercy of the producers. They are all running around offering us drinks and encouraging us to talk about specific topics when the camera is rolling.

“Some people go mad, and give up trying to hold it together and just start drinking,” Brad said. “By week three, people started getting in each other’s faces. The cocktail parties started at sunset and ended at sunrise…it was mentally, emotionally, and physically exhausting.”

Q: Is the show fake or scripted? How much is real?

A: The show is not scripted at all, said Ashleigh.

“Obviously the dates and scenarios are set-up but all the conversation is real,” she said.

Chris Harrison admitted in an interview that although the show is edited by producers to create drama, the things that happen are very real.

“I’ll be the first person to tell you we edit the show,” he said. “We try to throw people off. What we don’t mess with is the sincerity.”

Q: Do the contestants have access to the outside world (Internet, TV, etc.) while filming the show?

A: According to an interview Chris did with Entertainment Weekly, “There’s no TV or Internet in the house — the whole thing is to be about the Bachelor and the show.”

“We are not allowed to speak to friends or family until we get home. Phones and computers are taken away the day you get there,” she said. “We [would] sit in the house or by the pool; it gets pretty boring. One day I ran laps around the outside of the house since there was not a gym.”

Despite the fact that the contestants are in new cities and exotic locations, sightseeing is pretty much out of the question.

“You can not leave the house, ever,” she said.

Q: Are the contestants really there to find love or do they just want to be on TV?

A: Everyone has their own motivation for going on the show, but for the most part, it seems like the people that go on the show are looking more for an ‘experience’ than love.

“I thought [Jillian was] really cool and gorgeous, but I think her and I are too different,” Brad Seberhagen told The Ashley. “I think most of the guys felt the same way, except for a couple. Like Jake [Pavelka] for example, he really wanted love, which I found a bit strange.”

“I can not speak for any other cast but the one I was on, [but] I think about half and half were there for love or TV,” Ashleigh Hunt said of the girls on her season. “You quickly figured out who was interested in what and that provoked fights obviously.” 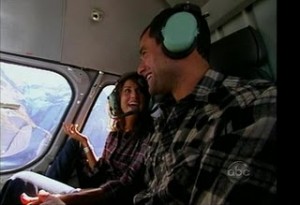 Q: If it’s so bad, why do people go these shows?

A: For Brad Seberhagen, it was a chance to live a temporary glamorous life that brought him to the ‘Bachelorette.’

“My favorite part of being on the ‘Bachelorette’ was being treated famous for a while,” he said. “I got tons of attention from all of these nice people from the show, they flew me across the country, they gave me free food and drinks, they hooked me up with a lot of cool clothes, shoes, luggage, and sunglasses. I got picked up by limos, and I had TV cameras following me everywhere.”

To read Part 2 of The Ashley’s “Frequently Asked Questions About ‘The Bachelor,’ click here!