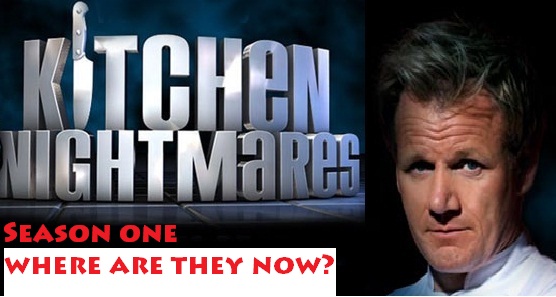 Recently, The Ashley has become obsessed with the show Kitchen Nightmares. She used to be really annoyed by its star Gordon Ramsey, but The Husband has been watching the show a lot and eventually got The Ashley hooked!

Naturally, because she is also obsessed with doing “Where Are They Now” posts, she had to find out what’s happened to the restaurants featured on Season 1 of the show. Those episodes were filmed in 2007, so The Ashley was wondering if any of the restaurants were still open today. Read below to find out what happened once Ramsey left the building kitchen.

‘Member this little piece of sunshine?

For his very first U.S. episode of ‘Kitchen Nightmares,’ Gordon visited Peter’s Pasta Specialities in New York back in 2007. If you’ll remember, Peter was not the owner; it was in fact his sister’s restaurant, however he was the one running the restaurant into the ground. He was also the one supposedly dipping into the restaurant’s profits to purchase fancy clothes, flashy cars, self tanner and other stuff rich people  (or poor people who are trying to look rich) have. However, when the debt collectors come calling, things get physical out in front of the restaurant! (By ‘getting physical’ I mean he chased the bill collector with a meat tenderizer. No, seriously, this happened.)

Gordon put a stop to Petey’s sticky fingers, as well as all of his “sampling” of the restaurant’s food and drink. He also forced Pete to spend money to upgrade the restaurant’s kitchen and created a new, family-style Italian menu.

Status as of 2014: CLOSED! Apparently, Pete and the gang didn’t keep Gordon’s changes and the restaurant closed in 2008. Check out what some of its last customers had to say about the place. (It ain’t pretty!)

This episode focused on The Old Stone Mill, a beautiful restaurant in a historical building. The owner, Dean literally rebuilt the building on his own. He also had an terrible temper (and even worse food!) Also working against them? The armpits of the restaurant’s general manager (he was a ball of sweat) and the over-garnished but poor quality food. (‘Member the funnel of salad and the martini glass of calamari?)

Gordon turned the restaurant into a steakhouse and played up its beautiful building and landscape. He also got rid of all the cheesy food presentations (such as the risotto in a diaper-like wrapping!)

Status as of 2014: OPEN! Dean, the owner of the restaurant featured on ‘Kitchen Nightmares’ sold the place in 2009. (Thanks to Roundup Friend Jody for that info!) The new owners are the DiNapoli brothers, who have changed the place up a lot since the filming took place. The now offer mostly Italian-American cuisine, rather than the steakhouse fare seen on the show.  However, it seems like even though Dean is no longer there, customers are still reporting less-than-stellar customer service. (Check out this diner’s experience !)

Louis DiNapoli, one of the new owners, didn’t think much of the changes that Gordon made to the place and talked about why he didn’t keep the menu suggestions when he purchased the restaurant.

“They added drapes,” he told The Epoch Times in 2013. “They wanted to make the restaurant into a steakhouse. A steakhouse is not called for in this area. I keep steak on the menu but it is basically an Italian restaurant.

Gordon visited this family-run Irish pub/restaurant during Season 1. The place was owned by a father and run along with his two sons (one was a bartender, one was the chef). They received one of the worst kitchen inspections of the season. After making the family clean the kitchen, Gordon gave the place a makeover and gave the chef a lesson on how to make a shepherds pie that doesn’t taste like roadkill.

Status as of 2014: CLOSED! The restaurant lasted a few more years, with the owners  stepping  doing comedy nights and other events to keep business going, but unfortunately, the place closed down in March 2012.

Sebastian’s (Toluca Lake, California):
Season 1’s sixth episode focused on Sebastian’s, a pizza restaurant near Burbank. The owner was a wannabe actor who was convinced that the restaurant’s “20 gourmet sauces” could fix anything, even craptastic food. Everyone in the place was a waiter/actor and the owner appeared to be more concerned with getting on TV than fixing his restaurant. (You know you’re a douche when you put your own Hollywood headshots up in your office!)

Still, Gordon slimmed down the menu and made over the restaurant. He also got the dormant woodfire pizza ovens up and running (replacing the microwave the chefs previously used to unthaw everything.)

Status as of 2011: CLOSED! The word online is that the owner completely disregarding Gordon’s changes and went back to his old ways almost immediately after the cameras left. In January 2008, the restaurant shut down and the family moved back to Boston. (Wanna read the email that they sent out to their mailing list? Click here.)

Sebastian, the owner, got it in his head that he was going to be getting his own show. Obviously, that worked out well for him.

Campania (Fair Lawn, New Jersey):
This eatery had it all: a chef who was desperately trying to cling to his youth via piercings and tattoos, a wisecracking waitress and an owner,  Joseph Cerniglia, that thought he knew everything. (Here’s a HIGHlarious summary of the episode.) Gordon did his best to get things turned around.

Status as of 2011: CLOSED! So many things happened here! For one, the restaurant closed down. However, that’s not even the craziest update. Apparently, the owner and his wife split up and he started to romance his 27-year-old pastry chef.

In July 2010, Joe overdosed on cocaine in the restaurant and he was later arrested. A few months later, Joe committed suicide by jumping off the George Washington Bridge. You can read all about that here.

Want to know what happened to the rest of the Season 1 ‘Kitchen Nightmares’ restaurants? Unfortunately, there aren’t too many left.

To find out what happened to the restaurants featured on Season 2 of the show, click here. To see what’s become of the Season 3 restaurants, click here!