It’s no secret that Russell Hantz will go to battle against his Survivor castmates, but now he’s in the middle of ferocious fight with a family member, nephew and current ‘Survivor’ cast member Brandon Hantz!

Emotions have been running high between the uncle and nephew since Brandon’s season of ‘Survivor’ started. Russell has taken to doing live commentating on his Twitter while the show is on, and oftentimes, his uber-emotional nephew is the butt of his jokes. Russell especially likes to pick on Brandon for his tendency to cry. 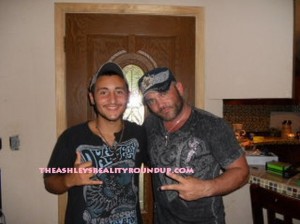 This morning things came to a head between Russell and Brandon, who waged an all-out Twitter war against each other!

I don’t know about you but The Ashley is a big fan of reality TV stars taking their personal problems and arguing about them over the Twitter. It’s pretty much the best thing ever, yes?

While Russell has been poking fun at Brandon all season, him saying that Brandon is the worst ‘Survivor’ player ever seemed to be the straw that broke the camel’s back for Brandon. After seeing that, Brandon finally laid into his creepy leprechaun uncle. (By the way, below Brandon is referring to Shannon Elkins, who was on ‘Survivor: Nicuragua’ and is now Russell’s sidekick.)

Never one to let someone else try to make him look stupid, Russell responded to his nephew with this:

That’s when things got personal, and people started threatening each other! (I love this crap, don’t you?) 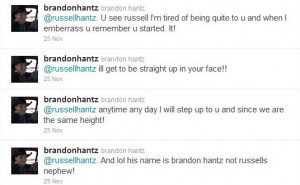 Please, God, let CBS get this on film. 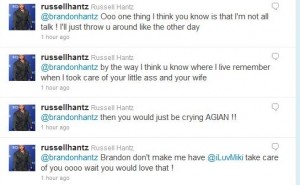