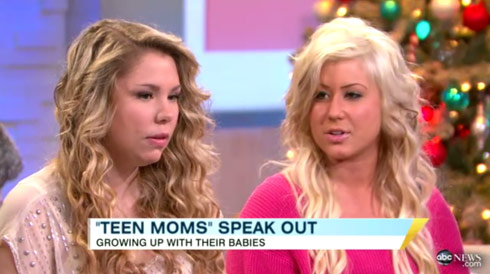 The day has finally arrived! The second season of Teen Mom 2 starts tonight! The Ashley is so excited to have her guilty pleasure return on Tuesday nights! (You know you watch this crap too!)

Anyway, in honor of the season premiere, two of the stars of the show, Kail Lowry and Chelsea Houska, appeared on Good Morning America this morning to talk about the new season and what’s changed in their lives since we last saw them. (If you’d like to know what’s changed since Season 1, click here.)

In case you were still asleep when it aired (lucky you), The Ashley will go over a few things that were discussed on the morning show. (By the way, Jenelle Evans and Leah Messer weren’t on GMA because they were busy doing a photo shoot. All of the girls are in New York City right now.)

Anyway, here are some of the highlights:

Kail on her relationship with baby-daddy Jo: 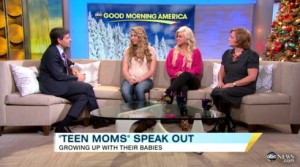 Chelsea on why she tried to make her relationship with her baby-daddy Adam work:

“I always wanted my family together. I believe children should have a full family. You should be married when you have a child. When you have a kid young, you just can’t always give them that opportunity.”

Kail on what it’s like to be on camera during high-stress times:

“It can add a certain level of stress because there are certain times where you feel really vulnerable and you want to experience something by yourself but you have these cameras there. But I think part of it is pretty good because we get everything documented, which some people don’t really have the opportunity to do.”

Chelsea on what it’s like to be a role model:

“We get a look back at mistakes we made and try to improve on them. We try extra hard to be good role models for the other girls out there.” 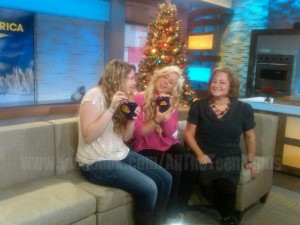 Kail on if she thinks ‘Teen Mom’ glamorizes teen pregnancy:

“It’s so hard. I don’t think people really are thinking about that when they say it’s glamorous.”

Chelsea on when Adam called Aubree a mistake:

“I try not to think about that too much anymore but it was a big deal and it still hurts.”

Kail on what she hopes girls learn from the show:

“I think it’s really important for girls to notice that in one episode, one of us is crying, one of us is fighting with her boyfriend, one of us doesn’t have enough money to buy diapers and one of us is about to go to jail. There’s no way that any of that is glamorous.”

The girls were looked fantastic on the show this morning. They’ve both really matured in their looks since Season 1 and look really different!

Wanna see the clip of the girls on ‘Good Morning America’? Click here! (Sorry it wouldn’t let me embed the video.)

Tune into MTV tonight to see the Season 2 premiere! (You know The Ashley is taking her phone of the hook! Don’t judge me!)