The Ashley doesn’t watch Big Brother (never has, never will) but she thought that those of you who do watch that crap would enjoying hearing this story.

Apparently, a couple from a recent season of ‘Big Brother’ has been spotted filming for the upcoming season of The Amazing Race.

According to multiple reports, including this one on Big Brother Junkies and multiple posts on RealityFanForum.com), Rachel Reilly and Brendan Villegas of ‘Big Brother 13’ have strapped on the ‘Amazing Race’ backpacks for a trip around the world. Apparently, the couple is affectionately  annoyingly known as ‘Brenchel’ by fans of the show.

Grrr, CBS! When will you stop casting reality TV stars from your other reality shows on ‘The Amazing Race.’ The Ashley liked this show better when ‘normal’, everyday people made it on this show. Nowadays, you pretty much have to have a gimmick to get cast.

A few seasons back, another ‘Big Brother’ couple, Jeff and Jordan, appeared on the show, and ‘Survivor’ stars Ethan Zohn and Jenna Morasca graced us with their presence this season.  (Don’t forget- Rob and Amber also did a stint on ‘The Amazing Race.’) This is getting kind of old, yes?

Anyway, from what The Ashley is able to gather from various spoiler sites, Season 20 racers started their journey in Los Angeles sometime last week and then traveled to Miami. From there, there have been reports that the teams have flown to Argentina, Peru, Paraguay, Istanbul and Vancouver, Canada. The crew was also seen at a pit stop in Turino, Italy, last Sunday, December 4.

By the way, all of the locations, as well as the photos, came from this amazing site. These people are working hard to find out this info, and The Ashley has to give credit where credit is due! 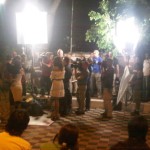 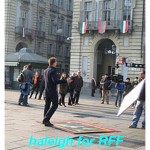 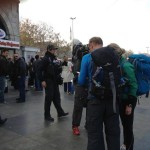