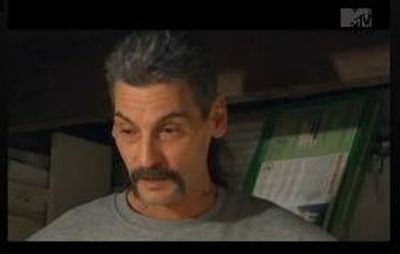 Looks like Butch Baltierra was able to squirm his way out of trouble again!

The domestic charges filed back in September by April Baltierra against Butch, the mulleted father of Tyler Baltierra from Teen Mom, were dropped this morning, according to this article from The Times Herald of Michigan.

For those of you who don’t follow Butch News as pathetically as The Ashley does, she is happy to fill you in. Back in September, Butch’s wife, April, had Butch arrested after he allegedly came home “High! High” as a kite and beat her up. (You can read about that here.)

Anyway, the charges were dropped because the victim (who I’m assuming is April) had a “medical issue” and did not show up to the hearing. Hmmm…….

However, Butch isn’t quite off the hook just yet.  According to the article, “the case could be reauthorized in the future when the victim is available.”

I think it’s unlikely that this will happen, however. From what I understand, April and Butch are back together living in co-dependent mullet paradise.

I’m happy he didn’t get locked up again. ‘Teen Mom’ just wouldn’t be the same without that irresistable salt-n-peppa mullet swinging around for the camera! However, Season 4 supposedly wrapped in November, so it’s likely that we’ll see the whole Butch/April fight play out onscreen!

UPDATE: Tyler has added his two cents to the charges being dropped against his pops. He tweeted the following this afternoon: