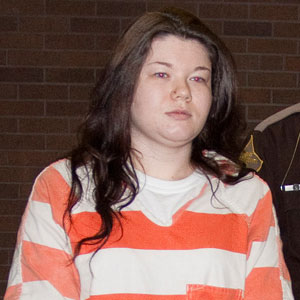 Although troubled Teen Mom star Amber Portwood has been in jail for over two months now, it looks like her time in the slammer will be coming to an end soon, now that the court has worked out a deal with…wait for it…MTV!

According to The Herald Bulletin Online, a halfway house for women in her hometown of Anderson, Indiana, has accepted Amber into their program as of this afternoon. She will complete her court-mandated rehab while living at Sister to Sister Ministries (not to be confused with this ‘Sister, Sister’ of course).

She was scheduled to go to drug court last week but her hearing was postponed so the courts could work out a deal with MTV, with whom Amber is still under contract with. (This seems a little odd, doesn’t it?) The court ruled that Amber’s contractual obligations to MTV would not be allowed to interfere with her completion of the drug rehab program. They also ruled that Amber can not be sued by MTV for violating her contract in any way.

While living at the halfway house, Amber will be able to live a semi-normal life, being able to come and go as she pleases, provided the staff knows where she is. She will have a 10 p.m. curfew and must submit to daily screenings, counseling and appear in drug court once a week. If she fails the program, she will head back to jail for five years!  During the court hearing, the judge reminded Amber that this was non-negotiable, according to the article.

Now that she’s been accepted into the program, she is officially able to be released from jail; however since the halfway house is unable to evaluate her for admission until next week, she will likely remain in jail until Monday, February 20 or Tuesday, February 21.

Although many celebrities seem to worm their way out of legal problems, this doesn’t appear to be the case with Amber. If she breaks the rules, she goes to jail for five years, no questions asked. Her daughter, Leah, would be about nine years old by the time she got out!

Although The Ashley has taken many a jab at Amber in the past, she has her fingers crossed for Amber and really hopes that this will be the final push she needs to get her life back on track.

I honestly hope that she does not go back to filming ‘Teen Mom’ after she is released from jail. The last thing she needs is an MTV camera in her face and the paparazzi chasing her while she is trying to focus on getting better.

Update: TMZ is reporting that Amber will basically be forced by the court to quit ‘Teen Mom,’ as she will not be able to film inside the halfway house, at her court-required job, etc. Click here for more details.