UPDATED 12/9/12: The stats now include the girls featured on Season 4 of the show.

The Ashley has done some research to figure out some statistics regarding the girls who have appeared on the show 16 & Pregnant. She decided to take on this project because she thinks it will be helpful to fans of the show and, well, because she has no life. This is Part 1 of The Ashley’s Official ’16 & Pregnant’ Research Project. (To see Part 2, click here!)

Here’s everything you’ve ever wanted to know about the girls who have appeared on 16 & Pregnant. (If you’re trying to get cast for a future season, maybe this research will tell you if you have what it takes to make it on the show….that was a joke.)

*More than half of the girls that were cast for the show are from Southern states. Very few are from the Western states. (For research purposes, ‘Southern’ states include anything south of West Virginia and east of Texas.)

*The state that was home to the most ’16 & Pregnant’ girls was Texas, with 8 girls, followed by Florida and Pennsylvania with 4 girls each.

*The city that was home to the most ’16 & Pregnant’ girls was Riverview, Florida. Two of the girls (Markai from Season 2 and Jennifer from Season 3) are from that city.

*There have been 49 babies born on ’16 & Pregnant.’ The girls on the show are slightly more likely to have a girl than a boy.

*There have been 2 sets of twins born on the show.

*The most common baby names featured on the show are Ayden and Noah, with 2 girls naming their babies each of those names (although they are spelled differently.)

*Only 9% of the girls featured on the show have chosen adoption for their children.

*As of December 2012, at least 9 of the girls featured on the show (19%) have gotten pregnant again. (Only confirmed pregnancies have been included. Other girls are rumored to have been pregnant, but it wasn’t confirmed.)

To find out how many of the girls graduated from high school and went on to college, click here.

Here’s a very cool map of all of the girls’ locations, as well as their babies’ names! To view this awesome map at full size, click here. It was used with permission from its creator, Mara Page. 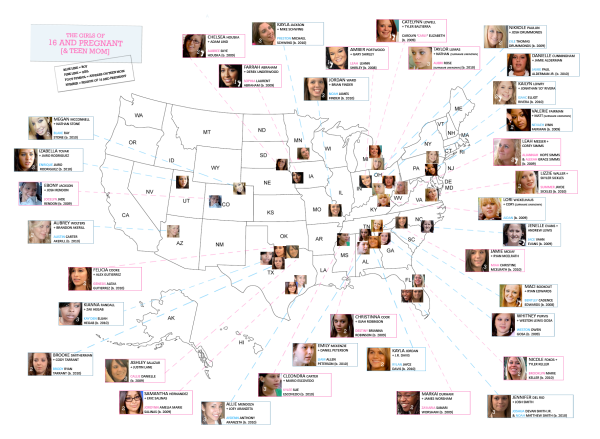