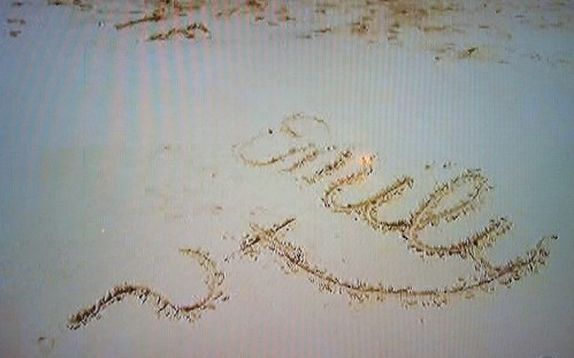 Well, kids. We’ve made it to the Final 3! You should pat yourself on the back for making it this far. (Of course, this season has been a treat compared to the last season of The Bachelor starring Ben the Bore.) Anyway, Emily has narrowed down her many suitors to just three: Jef[f], Arie and Sean, and tonight, she must cut it down to only two.

Of course, such an important event can’t take place in just any location, so Emily and her men head to the island of Curacao for their dates. (In case you’re wondering, yes, that’s where they get the name for that blue liquor they put in your tropical drinks. The more you know….)

First, as per usual, Em gives us a run-down on each of the remaining guys. She says she has strong feelings for all three guys and now she wants to see who is best, um, equipped to create the plethora of kids she so eagerly desires. (This is where those Fantasy Suites could come in handy!)

But before we get to see her potentially get freaky in the Fantasy Suites, we have to sit through her recounting her entire courtship with each of the guys, including every ridiculous puppet/Muppet date. She yammers on for awhile, and then does possibly the most cheesetastic thing of the season: she writes “Emily + ?” in the sand and lets the waves wash it away. Velveeta overload!

First, Emily meets up with Sean, who is the only man that hasn’t told her that he loves her. This is irking Emily to no end, and she seems determined to squeeze an “I love you” out of this man before the day is done. I’m sure every man Emily has every been within 10 feet of has swooned over her (beautiful people problems, you know) and the fact that one guy won’t tell her he loves her is really bothering her.

They are picked up by a helicopter (naturally) and flown to a private island for their date. Once they arrive on the island, Sean tells us that he is planning to tell Em that he loves her and is sweating about how to do it. Speaking of sweating, Sean’s level of perspiration has reached an epic level at this point. His entire head is literally more red than the rose he’s probably not getting at the end of this episode. I can’t even focus on all the crap they’re talking about because of all that redness!

Sean tells Emily he’s “crazy about her,” which is basically what guys say when they don’t want to tell a girl he loves her. Emily is clearly disappointed that Sean didn’t have the balls to finally tell her. (Um, give him a break, girl! He’s only known you like six weeks!)

To distract her from all the “I love you” nonsense, Sean suggests they go snorkeling. (Good thinking! She can’t expect you to say much with a snorkel jammed in your mouth!) After their undersea adventure, they head to a beach for a romantic bonfire. Unfortunately for Sean, Emily is still harping on the fact that she still doesn’t know how he feels about her. Good Lord, just say it already so we can move on, please!

Sean starts to panic and begins throwing out random phrases he thinks will appease Emily: “I want to be a soccer dad,” “No one compares to you!”, etc. He then busts out a letter he wrote to Ricki. Everything about the letter makes Em swoon, except for the fact that it doesn’t say “I love your mama” anywhere on there. After the letter is put away, Em asks Sean if he’d be willing to propose, and, after a few minutes, he finally tells her that he’s in love with her. Thank God.

Once Sean has said “I love you,” Emily rewards him by presenting the Fantasy Suite card. They make it clear that they will be “staying up and talking without distractions,” and not doing any of that “other stuff.” They head to the suite, which has a private hot tub and jumbo bed that looks perfect for, um, “talking.”

Still, Emily is wondering if it’s proper to have a gentleman caller stay the night, so after getting Sean all worked up, she tells him to hit the bricks in the name of decency. After a few more gross open-mouthed kisses, Sean departs. (I’m pretty sure he was headed straight to the liquor store to purchase a Playboy and a bottle of lotion!)

The next day, Jef[f] arrives for his date with Em. They meet on the beach and tell each other they “look amazing,” even though they’re both just wearing ugly T-shirts. Anyway, Emily informs Jef[f] that they’ll be spending the day on a yacht (as you do).

Once aboard, they chat about Jef[f]’s mysteriously missing parents. He tells her that although his parents were skeptical about him going on the show, they are now thrilled to meet Emily. (Fly them over to Curacao! I’m sure there are some poor people they can make shoes for or something while they’re here. I’m dying to see these people!)

In between cliff diving, swimming and kissing, Emily basically tells us that she’s in love with Jef[f]. (See, Sean, it’s not that hard to say!) They finish the day off with a sunset cruise. (Now, how the hell does her hair look that good after spending the whole day in the ocean? I’d look like some sort of Chia Pet/sea urchin hybrid by now!)

That night, they head to dinner to discuss some tough subjects, including where they will live should Emily pick him. She tells him that they don’t have to move to Charlotte; in fact she’d like to move somewhere new so they can start fresh together. Or, you know, Charlotte works too. She evens tells him that she has pictured him living in her house (which is in Charlotte, by the way) with her and Ricki.

Finally, Emily presents the Fantasy Suite card to Jef[f]. As a semi-Mormon, he realizes that having half of America watch him get down with some chick in a hotel room could get him thrown out of Temple for good, so he declines the invitation to spend the night. (Of course, Emily was going to kick him out anyway, so it works out!)

They go to the suite to “hang out” and snuggle, and after some bridling of passions, Jef[f] is also sent packing. (Instead of picking up a Playboy and a six pack of beer to nurse his blue balls, I picture Jef[f] buying a comic book and a Popsicle. Mormons don’t get blue balls; everyone knows that.) Something tells me Arie won’t be quite as happy to keep things PG in the Fantasy Suite. He seems like quite the horn dog, no?

We’ll soon find out, because the next day is his date with Emily. They meet at a dock, where Emily is waiting to take him out on a sailboat. They spend most of the day sucking face, but manage to detach their lips long enough to go swimming with dolphins.

Of course they can fall in love while swimming with dolphins in paradise, or traveling through Europe, but what about when they go back to the real world? I think they should make Arie escort Emily and Ricki to McDonald’s and sit there while Ricki throws a hissy-fit because she didn’t get the Happy Meal toy she wanted. If he sticks around, then he really does love Emily.

After kissing some more at sea, they head to a romantic restaurant (no Happy Meals in sight!) to chat. Emily tells us that she needs more from Arie than a kiss and a grope. She asks him about his day-to-day life and he says he likes to sleep late, and go out with friends at night after work. Yes, that should fit right into Emily’s life as a single mother.

Arie asks where they’ll live, and Emily tells him that she doesn’t have all the answers. (I do— Charlotte!) He then explains to her how he’ll win Ricki’s trust and become her best buddy. He’s saying all the right things and I can almost hear Emily’s panties drop under the table.

It’s Fantasy Suite time! Emily’s struggling with the decision on whether to listen to her vagina and go get freaky with Arie, or listen to her head and not let him spend the night. In the end, she can’t trust herself not to bang him so she doesn’t even give him the Fantasy Suite card.

The next day she meets with Chris Harrison to discuss what she’s planning to do at the rose ceremony. She says she’s still not sure which guy to cut because she can see a happy life with each of them. To help her with her decision, each guy prepares a video message for her that explains why they shouldn’t get the boot.

Emily’s blubbering while watching the tapes. I won’t bore you by recounting what each said. Basically they all said the same thing: “Emily…I love you…don’t cut me…everyone I know is going to be watching and I don’t want to be embarrassed…pick me. Oh, and I love Ricki too.”

Emily’s still struggling with her decision but the men are waiting and there’s only 15 minutes left, so Chris Harrison hustles her along. She apologizes to the guys for the fact that she’s about to break one of their hearts and then starts to hand out the roses. The first one goes to Jef[f], and the final one to Arie. Sean is standing there, looking shocked. It’s almost like he can’t believe he squeezed out that “I love you” for nothing.

Emily must feel really bad about cutting Sean because she can’t even look at him while escorting him to the pity limo. They sit down and talk, and Sean tells Emily he feels stupid for being so in love with her. Of course, this causes Emily to burst into [really bad] fake tears.

She sends him on his way, and he cries in the limo, saying he’s shocked that he’s not going to get to bang marry Emily. I feel bad for Sean. He seemed like a nice guy that probably would have given Emily anything she asked for, even a minivan full of kids!

Next week is the Men Tell All episode, where ABC brings back all the rejected men and we get to watch them tear each other’s faces off when they learn about all the crap the other guys talked about them behind their backs! I can’t wait!