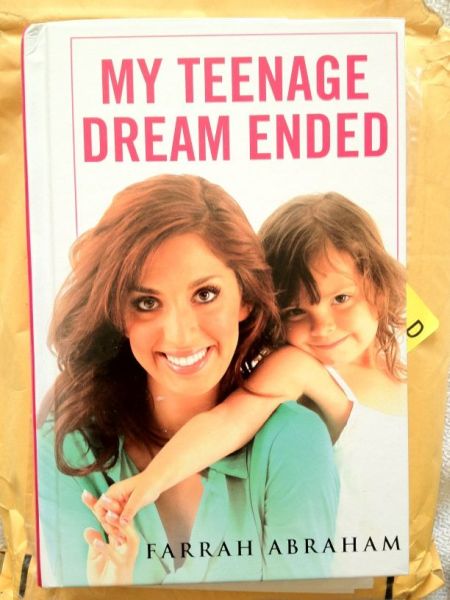 As us Teen Mom fanatics know, Farrah Abraham‘s autobiography, My Teenage Dream Ended, is due to hit Amazon.com on August 14, but in a recent exclusive interview withInTouch Weekly, Farrah revealed a few major bombshells that we can expect to see in the book.

Apparently, Amber Portwood isn’t the only ‘Teen Mom’ star that had to deal with drug and alcohol issues. In the interview, Farrah revealed that she, too, turned to drugs (such as marijuana and cocaine) and alcohol to deal with tough times.

“When I drank, I’d be happy for 10 minutes,” Farrah said in the interview. “When I got high, I’d feel a sense of nothingness for about an hour. But in the end, my negative emotions always came rushing back.”

Farrah said that she turned to “the juice” (as Butch would say), and drugs to ease the pain of losing her baby’s father, Derek Underwood. (Click here to read what happened to him–the actual story and not just what MTV tells you happened.) Two years after Sophia was born, Farrah was partying hard, which most likely explains this boozy little incident from 2010.

In addition to over-partying, Farrah also opened up about the suicidal thoughts she began to have following Derek’s death.

“All I could think about was killing myself,” Farrah told the magazine. “I figured I would drown myself in the bathtub — that seemed like the easiest way to go.”

However, she said she couldn’t go through with it because of Sophia.

“I realized I was being selfish,” she said. “The most important thing is making sure that [Sophia’s] well taken care of — how am I going to do that if I’m dead?”

What other secrets does Farrah reveal in her memoir? We’ll have to wait until August 14 to find out, but if you want to pre-order Farrah’s book, you can do so using the link below!