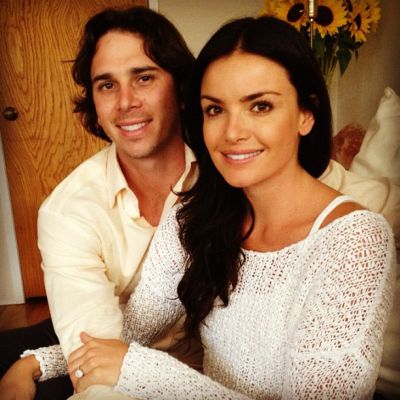 Ben Flajnik and Courtney Robertson are giving cohabitation another shot!

The couple, known for being one of the most-hated in Bachelor history, recently sat down with Life & Style Weekly to discuss their eight-month-old relationship. (Who the hell even thought they’d last that long? The Ashley had her money on another cheating scandal/breakup/”heartbroken” exclusive interview with People magazine happening within a month after the finale aired!)

Apparently the couple is once again attempting to live together in San Francisco.

“It’s a soft move-in,” Ben told the magazine . “We’re spending long periods together to make sure it works. A couple of months ago we tried this, and it didn’t go so well.”

They (and Ben’s adorable dog Scotch) now share an apartment in San Francisco, but Courtney is keeping her apartment in Santa Monica, California, just in case. Still, she apparently has big plans for the future for her and Ben. She told the magazine that in five years, we can expect them to be married with babies. (I smell a potential reality show plot, yes?)

Anyway, Ben and Courtney have been out-and-about in Northern California lately, judging a dog show together on July 28, and taking (and by “taking” I mean mooching) a free vacation at the Fairmont hotel in Sonoma.

The Ashley was surprised to see that Courtney and Ben were absent from the most recent “Men Tell All” special. She totally expected to see their grinning mugs there, discussing how “this system works.” Maybe they’re not as fame-hungry as The Ashley originally thought!