Jenelle and her latest fiance Gary, Kieffer, er…Courtland Rogers have only been dating (wait for it) for two months, but ol’ Court decided that was long enough to know that he wanted to spend the rest of his life with Jenelle. (Yes, The Ashley‘s aware that many couples get married after only a few months and are completely happy, so please spare me the story of how your mother’s friend’s brother got married after two months and have been together 20 years, thanks.)

Anyway, Courtland proposed to Jenelle today, and the couple took to a live UStream chat to announce the big news. 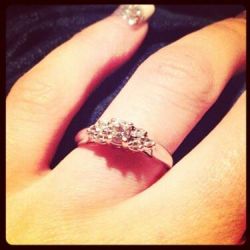 For those of you counting, Courtland is Jenelle’s second fiance in the past year. (Technically, he could have been her third, as many speculated that she had also been briefly engaged to Kieffer Delp over the summer.)  Her last engagement to Gary Head, ended with him and Jenelle both getting arrested for domestic violence. As you do.

Anyway, the happy couple have been living together for most of their relationship, and despite his criminal record, Jenelle’s mom, Barbara is fond of her daughter’s new boo. Last week, after Courtland presented Jenelle with a $3,300 diamond ring, Babs told Celeb Buzz, “It’s not an engagement ring, it was just a gift from her boyfriend. Jenelle does not need to be engaged, but he is a nice guy.” (Of course I read that in Barbara’s accent!)

Babs isn’t going to be pleased to her that her daughter has turned yet another boyyyyfriend into her fiance!

UPDATE: Jenelle has posted an update on her Facebook fan page regarding the engagement:

tomorrow we r going to start planning!! 🙂 OMG I’ve never been this happy in my life. It’s like a fantasy coming true. I’m going to be married to my best friend/lover/childhood sweetheart. He does anything for me and I do the same for him. I cried for 30 mins becuz i was so happy after i told him yes. then told him “thank u” he said “why” I said “now I will have that family who’s loves me for me that I never everrrr had.” I love u Courtland Rogers forever and always. I’m here for u no matter what the consequences.