Last night, Teen Mom star Ryan Edwards shocked the ‘Teen Mom’ universe when he randomly decided to propose to his ex-fiance (and baby-momma) Maci Bookout on Twitter. (As you do!) Both are single–Maci and Kyle King broke up during the summer, and Ryan and his girlfriend, Dalis Connell, recently ended their relationship.

Seemingly out of nowhere, Ryan tweeted “Marry Me!” to Maci.

Maci, who has long-battled Ryan on custody of Bentley and other assorted issues, seemed just as shocked as everyone else. In fact, she figured that his account had been hacked (just as Farrah Abraham‘s account was a few days back). 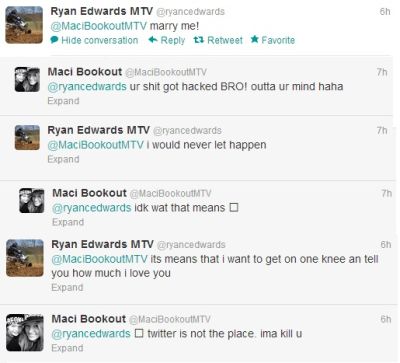 “Ur sh*t got hacked Bro, outta ur mind haha,” she tweeted in response to his marriage proposal.

However, Ryan denied that this was the case, and that he really does want to “put a ring on it!”

In regards to being hacked, Ryan assured Maci by telling her, “I would never let [that] happen.”

Maci asked what this all means, to which Ryan replied, “It means I want to get on one knee and tell you how much I love you.”

I’m sorry…what?! Are we in the Twilight Zone here?!

Maci responded with, “Twitter is not the place. Imma kill you!”

This morning, Ryan seemed to continued his Maci lovefest by tweeting, “Never give up on what you believe is right… no matter what gets in the way!!”

What does The Ashley make of all this? Even though Maci and Ryan did, indeed, hang out last weekend with mutual friends, The Ashley still believes that Ryan is playing a big joke on ‘Teen Mom’ fans. He, with his dry sense of humor, probably thought it would be funny if he made the fans believe that not only were he and Maci getting back together, but getting married.

Of course, this could all be real and Ryan may want to actually marry Maci (even though they basically hated each other just months ago). However, The Ashley finds this very unlikely. It’s also possible Ryan needs to be committed to a mental institution (a la Jenelle Evans) because he’s lost his damn mind!

(Photos: MTV, All the Teen Moms)