This week ABC decided to attempt to kill The Ashley by stretching the normal two-hour episode into a two-day, four-hour Bachelor extravaganza. Since recaps are extremely time-consuming and cause The Ashley to actually have to sit down and think, she may not make it through this. (Come on, ABC…did you really have to take up two of my weeknights? I mean, it’s not like I had plans or anything, but generally Tuesdays are devoted to staring glaze-eyed into the TV while watching some other crappy reality show.)

Anyway, the episode starts with Chris Harrison announcing to the remaining 11 girls that since Sean loves Montana (wait, which one is Montana? The one with the creepy eyes?) they’ll be heading out on a journey. The girls run excitedly upstairs to pack their bags. Sadly, about half of these knuckleheads are excited because they probably think Montana is some exotic Asian country.

The whole gang jets off to the wilderness of Montana. Once settled in the lodge, the girls learn that there will be a group date, a one-on-one and a two-on-one. The girls all hope that their name isn’t called for the two-on-one because they know damn well that the producers are going to put crazy ass Tierra up against whoever is picked.

The one-on-one date goes to Lindsay, who is so happy that she starts to cry. (Maybe those aren’t tears of happiness, actually. Maybe she’s crying because she knows Tierra’s probably going to light her on fire when she gets back from this date.)

Anyway, Lindsay and Sean helicopter off and Sean tells Lindsay he’s happy he gave her a chance and didn’t send her ass home on the first night when she showed up in that horrific David’s Bridal circa 1997 wedding dress. They helicopter over the wilderness and look at mountains and crap before landing on an Indian Reservation for a picnic. 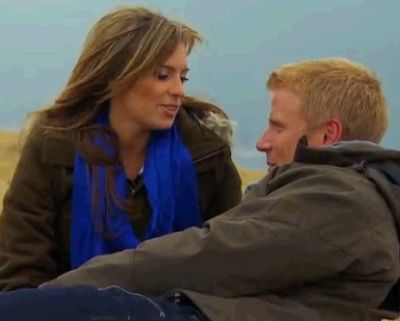 Later, they settle down to dinner for some conversation. Lindsay must have recently learned a big word and is eager to use it in a sentence. She says that when she was “an adolescent she had a tough time in adolescence” because she moved around a lot. That’s enough to convince Sean to give her the rose (as well as a nice long tongue-ing, um, ew).

Sean tells Lindsay he has one last surprise for her (I’ll bet you do, big boy!) Unfortunately for us, it’s not that kind of surprise. It’s actually that other type of surprise they always do on ‘The Bachelor’ shows: drag an unsuspecting contestant to some sort of outdoor concert, where they’re forced to sway awkwardly on a riser while the crowd below them shoves an iPod at their crotch to record this event. Lindsay and Sean cuddle as they listen to some chick sing, knowing that 1) they will be on YouTube in about three minutes and 2) every man there is staring at Lindsay’s ass. Awkward!

Every single person in the state of Montana seems to have come out for this concert. (Must be a slow week, what with the tractor pull show not in town and all…)

Back at the lodge, the other girls learn that it will be Tierra and Jackie who will be going on the two-on-one date. Jackie’s not very happy but Tierra is practically bursting with excitement. (Seriously, I think even the dent in her forehead is smiling!)

The other girls meet up with Sean the next day for their group date. In an effort to prove to Sean that they can be all woodsy and stuff, the girls are all sporting their best flannel shirts and boots. Half of them look like Lumberjack Barbie and half of them look like Paul Bunyan in drag. I’ll let you sort out who’s who.

Anyway, the girls approach Sean and Chris, who are standing in a meadow with a bunch of goats. (One girl seriously asked “Are those dogs!?” She must be from Los Angeles. Sigh.) Chris Harrison tells them that they’re going to be participating in some sort of odd, wilderness obstacle course in which they’ll have to saw logs, milk the goats and then drink the goat milk. The winning team will get to spend the rest of the evening with Sean, while the losers have to go home.

After producers ask poor Sarah the obligatory, “Do you think having one arm is going to hold you back today?” question, it’s time for the festivities to begin. The race starts with a few of these nitwits jumping into a canoe and basically just paddling in circles. After a while, they finally steer themselves in the right direction. Not going to lie, I was really hoping one of those canoes would capsize and they’d have to rescue the girls by pulling them up by their extensions.

Anyway, they do some more stuff until finally the last girls are tasked with milking the goat. (One girl literally puts the goat’s leg into the jar. Someone please tell her that milk doesn’t come from the goat’s leg.) The  red team finally manage to squeeze enough milk out of that poor goat to win (although I’m pretty sure Selma used her own mammaries to help fill that jar!)

The winning team, which consists of Selma, Sarah, Desiree and Robyn gleefully watch as the losers board the van to go back home. The winners and Sean head to a restaurant and are enjoying great conversation about the goats’ nipples when all of a sudden Sean decides that he misses the losers and is going to ask them to join them. The red team is livid, especially Robyn and Desiree, both of whom look like they want to high-heel Sean in the face.

The blue team gets word that Sean wants them at the restaurant, ASAP, so they shuck off their sweats and fire up those flat irons to try to make themselves look halfway human for the date. When they arrive at the restaurant, they are met with icy stares from the red team.

Meanwhile, Tierra realizes it’s been a while since she’s creeped anyone out, so she decides to head over to the restaurant too, even though she wasn’t invited. She sneaks into the bar area, wearing the shirt Lindsay wore on her one-on-one date, which was also the shirt the blue team wore during their challenge. These people do know that they make more than one kind of flannel shirt, right?

She sneaks up behind Sean and puts her hand over his eyes. (I’ll bet she also has rope in her pocket to hogtie him!) They start playing that Michael Myers music and Sean turns around and has to pretend to be happy to see Tierra’s dented mug. She takes him outside, and Sean is clearly uncomfortable. I miss the days she was in a neck brace. Just sayin’…

Eventually, Tierra releases Sean and he asks Catherine to hang out with him alone. They go outside and hang out in a parking lot. Nothing says romance like making out with the sweet smell of a dumpster lingering in the breeze!

The rest of the date is just a bunch of girls crying, stealing Sean away from each other and Robyn just giving Sean the stink eye, so let’s move on.

The next day is Jackie and Tierra’s two-on-one date. They head out to a dude ranch that reminds me of the place all of those kids worked at on the show ‘Hey Dude.’ (You know you loved that show too!) They go horseback riding and Jackie’s horse is having a hard time keeping up with Sean’s and Tierra’s. (I’ll bet that crazy bitch slipped Jackie’s horse a few Ambien before they started their journey!)

Later, Jackie tries to tell Sean how terrible Tierra really is to the other girls, and Sean wants to hear none of it. They head into the cottage for dinner, and it’s just incredibly weird. Tierra’s sitting there with this big, creepy toothy grin on her face, while Jackie is looking all concerned, knowing she’s probably going to get dumped in favor of this lunatic.

Tierra pulls Sean aside and decides to bust out the “dead boyfriend” card to explain why she’s so “cold.” She even manages to squeeze out a few tears, and that basically seals poor Jackie’s fate. Sean gives the rose to Tierra and sends Jackie packing.

After Jackie leaves, Sean and Tierra head out for a moonlight picnic. Sean says that the date is “perfect.” Um, yeah it may be perfect now, but wait until you dump her and she handcuffs herself to the fire hydrant in front of your house!

The next night is the rose ceremony and all the girls are on edge. Everyone’s pissed that Sean dumped Jackie in favor of Tierra, and Desiree says that Sean appears to be giving the roses to girls that are “having a hard time.” She calls him out for giving out pity roses. Robyn is especially pissed, and has had enough of Tierra’s nonsense. She promises to turn this show into some sort of ‘Bad Girls Club.’ Get it, girl!

She marches up to Tierra and starts calling her fake. Um, I’m going to need some sort of hair-pulling or bitch-slapping, please. All this talking just won’t do. Tierra says she’s tired of all the girls talking crap about her. Poor tortured Tierra. Is anyone else having Vienna flashbacks here?

Tierra is getting all mad, just as Sean turns the corner. She’s scared that he saw her at a bad moment and takes Sean outside. She throws a pity party for herself, wailing that she’s just a nice girl and all the other girls are meanies. Seriously, I think every woman in America was screaming “Dump her crazy ass!” at their televisions last night.

Sean begs Lesley to tell him the truth about Tierra, but Lesley doesn’t want to say much, because she knows if she talks crap on Tierra, her ass is going to get sent home for being catty. It’s finally time for Sean to hand out the flowers, but he’s very “confused” as to who to dump.

Tierra, Daniella and Lindsay all have roses but the other girls look panic-stricken. He hands out roses until finally only Desiree and Robyn are left. Clearly he is punishing them for talking crap on Tierra. The last rose goes to Desiree, and Robyn is sent to Forever Alone-ville. She looks like she’s seriously about to cut a bitch. Girrrrl!

To be continued…..unless I suffer death by recapping.