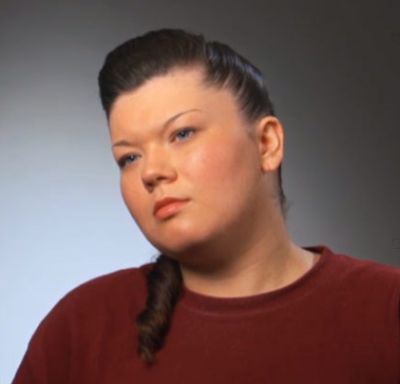 It’s been over eight months since troubled Teen Mom star Amber Portwood began her prison sentence at the Rockville Correctional Facility in Indiana. During her time behind bars, Amber has only had two visitors: her mother Tanya and Dr. Drew Pinsky, who arrived to film the “Amber Behind Bars” special in the fall of 2012.

During the special, Amber commented that none of her family, including her daughter Leah and baby-daddy Gary Shirley, had come to see her in prison. However, yesterday Amber was finally able to “visit” (via video chat) with her brother, Shawn Portwood, who has long been outspoken about his hate for MTV and the show that made his sister famous.

“Got to see my sister for 30 minutes,” he tweeted yesterday. ” I really do miss her a lot…She is doing really well. We talked about her classes and treatment.”

According to other tweets by Shawn, Amber is currently working on completing her last step of the CLIFF Program. (For those who don’t know what CLIFF is, it’s a prison-based intensive substance abuse recovery program that treats incarcerated methamphetamine abusers. It stands for “Clean Living is Freedom Forever.”)

The CLIFF program’s final stage focuses on teaching inmates how to remain clean and sober in the outside world and how to prevent relapse.

In addition to working on completing the CLIFF program, Amber is also working towards obtaining her GED.

In an entry on his blog, Shawn wrote that he believes we will see a new Amber when she is released from prison in 2014.

“She has had a lot of negative press in the past, which portrayed her as a very hateful individual.  And she was for a while,” he wrote. “She did not know how to control her anger or even shut up when she needed to.  But now I am happy to say that I absolutely believe that it is all behind her now.”

The blog post also mentioned a few more things regarding Amber’s daily prison life: she currently holds a job as a supervisor in the prison, has completed anger management classes and is able to speak to her daughter, Leah, on the phone each night.

In the past, as my longtime readers know, The Ashley was quick to make a joke about Amber’s trainwreck of a life. However, The Ashley truly hopes that Amber is, indeed, a changed woman, and is able to be a great role model to Leah and other girls who have overcome difficult things in their lives!