In its 12 seasons, American Idol has produced a lot of screeching high notes, corny and exaggerated dance moves, and way too many performances that have caused Randy Jackson to remark “That was pitchy and all over the place, dawg.”

However, for your enjoyment, The Ashley has put together a collection of some of the worst performances of all time on ‘American Idol.’ She sorted through the odd song choices, forgotten lyrics and overuse of the song “Superstition” by Stevie Wonder to bring you this list of bottom-of-the-barrel performances.  (Please note that The Ashley did not watch the first season of the show so she did not include any of those performances; however I’m sure there were some that were crap-tastic.)

Paige was in trouble from the first note of this Phil Collins classic. She started off scared and ended up just getting worse as the song went on. Even Paige knew it was bad. In fact, halfway through, she had the look on her face that read “Should I just stop?” Unfortunately, she kept going..and going…and going.. putting as much effort and personality into the performance as she would put into cleaning a hairball out of the shower drain.

She was coached by Miley Cyrus that week. Enough said. Let’s just say Paige didn’t last long after this song slaughter. You can watch it here.

Trying to keep up with his fellow Season 8 contestant and King of all Screams, Adam Lambert, the Gok-ster let out “The Scream Heard Around the World” while singing Aerosmith’s “Dream On,” prompting unoriginal journalists to jokingly call the performance “Scream” On. (Good one.) Thankfully, after this, Danny left the long, high notes to the master, Adam Lambert! 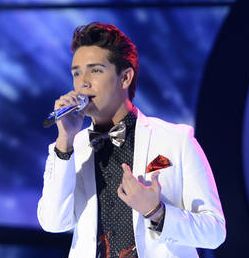 Not only did Lazaro choose one of the most boring songs known to man, but his version of this Karen Carpenter sleeper was lackluster, even from the very start. He limps through the song and, at one point, misses his key change and starts singing away from the mike (or maybe he was just so bad that they actually turned it off?) He left the judges–and the audience–looking for a five-hour energy shot…and earplugs. To watch Lazaro act as a human Ambien, click here.

Kevin did the Chicken Dance, the Tootsie Roll and a whole lot of other creepy dance moves while performing this song during Season 5. However, the creepiest thing about this performance was when Kevin sang the lyrics “We are undercover passion on the run” and “We are strangers by day, lovers by night.”

To watch Kevin bust a move (and hear him bust our eardrums), click here.

The Ashley has a keen recollection of the night this monstrosity happened. This creepgoblin walks on stage with My Little Pony hair and butchers one of The Ashley’s favorite No Doubt songs of all time.

David Cook and Adam Lambert received praise in past seasons for being original and changing up songs, so Haeley decided to take it upon herself to change up this classic Beatles song. A little bit country, a little bit bad pop and a whole lot crappy, Haeley warbled through the song, creating something you’d hear in a bad dream after listening to too much Beatles and John Mayer. The weird nurse-like outfit made this performance even higher on the creep scale.

Kristy Lee obviously got some bad advice this night. Taking the Beatles classic and turning it into a sped-up country song was like running barefoot through snow: it doesn’t work well and man does it hurt. Yeah, this performance hurt. Our ears. Her chances of winning and poor Paul McCartney’s heart.

If you would like to risk going tone deaf by listening to Kristy’s creepy countrified Beatles performance, click here.

To be fair, Phil’s performance of “Maria, Maria” wasn’t all that bad. In fact most of it was pretty good. But there’s was one note bad enough to earn Phil the number three spot of worst performances ever. It snuck up on Phil, leaving even him to stop for a split second and wonder “what the hell just happened.” It’s cool, everyone has a Peter Brady voice-crack moment once in a while…most just don’t have it on live, national television.

To hear the wonderfully awful note, scroll to the 2:25 mark of this video. It will make your day, I promise.

Poor John Stevens. For weeks, the judges told him that his throwback, Vegas crooner-esque performances were boring. For Elton John night, he decided to pick not only one of Elton John’s most up-tempo and fun songs, but one that was made for someone with the exact opposite of his voice. On top of it all, John incorporated his own awkward white-boy dance moves. The cherry on top of a sh*t sundae was his screeching falsetto during the “Laaa-lalaalallala” when he, like Phil Stacey, had an incredible voice-cracking moment.

To watch the horrorfest that is John’s performance, click here. (Not gonna lie, I put the video at the 51 second mark and watched the voice-crack moment over and over again.)

True, this was technically a “guest” performance, but it was so shockingly bad it can not be topped as worse performance on the ‘Idol’ stage…ever. Fantasia won the hearts of America during Season 3, taking home the big prize after delivering hits week after week.

So when Fantasia returned a few seasons later to perform her new single, everyone was expecting a hit. Fantasia took to the stage with flaming red hair, cramming lots of words into each sentence, most of which could not be understood. She incorporated painful sounding screams into the scary performance.

You can watch the frightening performance here. Do so at your own risk!

Of all the bad performances ever on American Idol, only one has ever garnered this look from Simon Cowell.”