America’s Got Talent viewers had a hard time focusing on the show’s acts last week, due to being distracted by a giant pimple-like object growing on host Nick Cannon‘s face. The mass had become so noticeable by last week’s show, it garnered its own Twitter account. (Yes, I follow Nick Cannon’s Pimple on Twitter. Yes he/it follows me. Don’t judge me!)

Last week, Nick posted on his Instagram account that he was finally going to get the mass on his cheek examined by a doctor. He later um, “popped up” (see what I did there?) on Access Hollywood to show off his facial flaw. 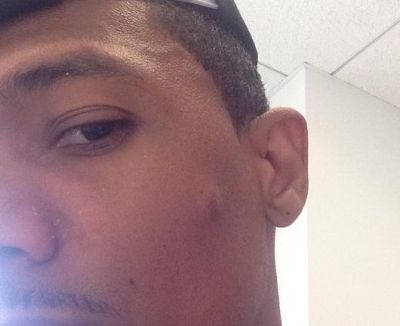 “I’m healthy,” he told the hosts. “The only thing that isn’t healthy is this big ol’ pimple on my face.”

“I don’t even see it!” exclaimed one of the hosts, who is 1) obviously blind and 2) a terrible liar.

Nick explained that it was caused by some of the medications he is on. On Saturday, he apparently underwent minor surgery to have the cyst removed. He appeared to be doing OK (although the same can’t be said for his pimple!) when TMZ caught up with him while he was gettin’ down with his band-aided self at ‘da club’ on Sunday night.

Nick says that, while the doctor had to take a culture of the mass, it’s “all good.”

Is it wrong that I’m still going to continue to follow Nick’s pimple?