Last night, The Ashley was all set for the premiere of The Bachelor. She had her notebook, pen, giant cup of hot chocolate and a snarky attitude, ready to make fun of Juan Pablo and the gals! However, instead of limo-exiting hi-jinks and cheesy Juan-Pablo-isms, we got an hour of what was basically filler dog poop! Instead of ‘The Bachelor’ premiere, ABC served us up a whole 60 minutes of watching Juan Pablo sing with his kid and girls pretending to be surprised when they found out they were going to be on ‘The Bachelor.’

Because, you know…who doesn’t hang around their house in full makeup (false eyelashes included!) and a camera-ready outfit. I’m sure it was a total surprise.

Anyway, because they didn’t give The Ashley anything she can recap, she decided to compose a list of things she learned while watching this crappy “preview” episode of ‘The Bachelor.’

1. Baby Jesus Can Get You on ‘The Bachelor’

Yes, kids, you read that correctly. Apparently, Jesus has nothing better to do than help desperate girls achieve their dream of being one of 25 women to date some knucklehead on a TV show. How do we know this? At least three of the girls shown last night told the cameras that they were going home to pray about getting on the show. One girl said she was just going to “pray on it” and hope she was chosen. As you do.

Another surefire way to get on ‘The Bachelor’ (you know, in case the Baby Jesus was too busy to answer your prayer) is to glue some frighteningly bad extensions to your head. Last night’s episode proved that it is almost a requirement to have long, flowing extensions in order to get on this show. Of course, most of these girls look like my old Barbies used to after they went 10 rounds in the “beauty parlor” with my friends and I when we kids.

3. A “Free Spirit” is a Viable Career Option

Last night we met Lucinda, a woman who lists her job as “Free Spirit.” Although it appeared that she was working in a clothing store when Chris Harrison greeted her, something tells me that ol’ Lucy has worn a hole in every single one of her friends’ couches and that she considers herself a “free spirit” because she plans on being a reality star and has no need for an actual career. She should be fun to make fun of.

4. If You Are in the Running to be on ‘The Bachelor’ You Need To Look Good At All Times

This episode featured a segment in which the show’s producers “surprised” the girls at their homes to inform them that they had been chosen for ‘The Bachelor.’ The women opened the door looking like they had just stepped out of a Macy’s ad and tried their best to look shocked. There’s no way they were actually surprised. No one just happens to look like that.

With my luck, they’d come to inform me that I was going to be on the show and find me with Nair on my upper lip, my hair looking like someone that should live on Fraggle Rock and the sweet sounds of “Uncle Jessie’s” classic tune from ‘Full House,’ “Forever” blaring on my iPod. My guess is that they’d run away screaming…

5. Juan Pablo Has Been “Practice” His English

Ok guys, let’s just get this out there right now: there is no way in hell The Ashley is going to be able to refrain from making fun of Juan Pablo’s broken English. It can’t be done. I’m too much of a crap nugget not to go there. So feel free to get all your hateful comments out now because if Juan asks someone if they “want marry Juan Pablo?” I’m going to take it and run with it.

6. Drew From Last Season is Missing His Pink Shorts

On last night’s episode, Juan Pablo is seen sporting some lovely pink shorts, which The Ashley is beginning to think is a requirement to have if you’re a guy on ‘The Bachelor.’ Last season, Drew Kenney was constantly wearing a pair of pink-ish shorts, and before that, Sean Lowe and Ames Brown all had romps in rose-colored pants. Juan Pablo has joined the club. 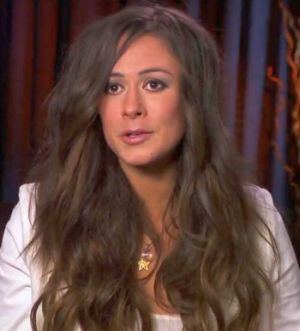 7. Jenna Burke Hasn’t Used a Brush Since We Last Saw Her on ‘The Bachelor’

Last night’s episode also included a very nice tribute to Gia Allemand, a former contestant that committed suicide back in August. While the tribute was touching, it was hard to look past a shot of former contestant Jenna Burke’s appearance. (Jenna, as you may remember, was the crazed blogger that competed on Ben Flajnik’s season.) Anyway, she spoke about Gia on last night’s episode and, from the looks of it, either recently stuck her finger in a light socket and/or hasn’t used a brush since 2011.

Tonight, the real fun begins! The Ashley will be recapping all of Juan Pablo’s “quest for love,” so stay tuned!