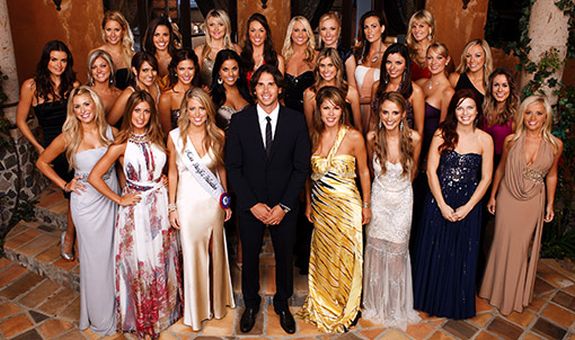 Juan Pablo Galavis‘s season of The Bachelor is now in full swing, and, just as with all of the seasons of the show that came before it, women can’t get enough. The show, along with its spin-offs The Bachelorette and Bachelor Pad, have been on for  many years now, so The Ashley decided to sum up the history of the franchise, using only numbers. (She did this once before for the show 16 and Pregnant, as you loyal Roundupers may remember.)

1 Number of men who have married the woman they selected on ‘The Bachelor’ (Sean Lowe will be the first!)

2 Number of times the show’s star rejected all of their suitors. (Brad Womack and Jen Schefft are both guilty.)

2 Number of contestants over the years who have fallen asleep during the first night’s cocktail party.

3  Number of children that wouldn’t exist had there been no ‘Bachelor.’ (Blakesly and Max Sutter and Riley Mesnick owe their lives to this show!)

3 Number of women a typical ‘Bachelor’ will have sex with on his season, according to producers

4 Number of final contestants that have been minorities

4 Number of African-American contestants to appear on Sean Lowe’s season, the highest to date.

5.5 Number of girls producer Mike Fleiss estimates that ‘Bachelor’ Bob Guiney had sex with during his season (Use your imagination on how he had “half” sex)

8 Number of times a season has ended without a proposal

9 Number of women who have been ‘The Bachelorette’

17 Number of men who have been ‘The Bachelor’

21 Number of engagements that have resulted from the ‘Bachelor’ franchise