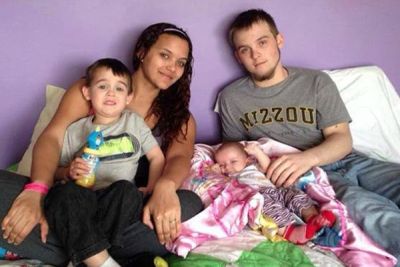 On this week’s episode of 16 and Pregnant we met Aleah,  a teenage girl who acts as a stepmom to her boyfriend Shawn‘s toddler son. She gave birth to her daughter Peyton in December after a high-risk pregnancy due to Aleah’s diabetes. The episode marks the first time that the show has ventured into the territory of step-parenthood, and, while the episode appears to have been a hit with the show’s fans, it did leave several important questions unanswered.

The Ashley spoke exclusively with Aleah to get the answers to some of the frequently asked questions the show’s fans had after watching her episode. Aleah has taken some heavy criticism for some of her and her boyfriend’s actions but says that, despite the negative feedback, she is still glad she participated in ’16 and Pregnant.’

“I don’t regret doing the show,” she told The Ashley. “I believe my story could influence a couple of people to try to take preventive measures to not end up in a sticky situation [like we did].”

Here, Aleah answers some of the questions she’s been getting asked a lot since her episode aired.

What is the deal with Noah’s real mother? Where is she?

While Aleah understands that viewers are curious to know the full story about where the mother of her boyfriend’s son is, she said that her episode didn’t go into detail about it because she didn’t feel it was right to put Noah’s birthmom on blast on national television, when she did not sign up to be part of the show.

“[Noah’s mom] didn’t ask to have her life [story] out in the world, so it’s not my place to discuss her in detail,” Aleah said.

Did Shawn and Aleah really meet in juvenile detention or did MTV make that up!?

Aleah confirmed that the love story between her and Shawn did, indeed, start in that unlikely place.

“Yes, Shawn and I really met in juvenile,” she said. “We were both in there for fighting and we flirted with each other during rec time. And when we got out we started dating and have been together ever since…”

Why did Aleah leave her baby during the episode?

Aleah insists that the back-story behind that scene is not as dramatic as it appeared on the episode, and she did not abandon her baby.

“I had Peyton at my mom’s with me the night before and he hadn’t seen her since two days before. That’s why he was so adament on keeping her that night and he would give her back in the morning,” Aleah said. “But Shawn and I actually met up that night to talk and I saw Peyton. It was what was fair for him, too. He has a right to see his daughter and my daughter needs her father.”

Are Aleah and Shawn getting married?

Aleah says that while she and Shawn may eventually tie the knot, they have no plans to get married any time soon.

“Shawn and I have talked about marriage but we want to wait awhile,” she said. “We think its just too much pressure to put on ourselves right now.”

While Aleah and Shawn were a bit older than most of the girls that appear on the show–she was 18 during filming and Shawn was 19–she was picked to be part of ’16 and Pregnant’ because she had a very unique story.

“I keep telling people that it’s not that big of a difference,” she said. “I still have all the same struggles as a 16-year-old. It’s not any easier because I’m two years older.”

(The Ashley would like to interject and remind fans that Amber Portwood was 18 years old at the time she filmed her episode of ’16 and Pregnant.’ Her baby-daddy, Gary Shirley, was 22 at the time of filming!)

As The Ashley has stated numerous times, there has been no talk of a ‘Teen Mom 4′ and none of the Season 5 girls have been approached to participate in any other show. (She will be the first to let you know if and when it’s been decided that MTV is going to do this show!)

While Aleah enjoyed her experience filming ’16 and Pregnant,’ she said that if she were to be asked to continue on ‘Teen Mom 4’ she would most likely decline.

“I’ve had my experiences I’ll never forget but I think I’m done,” she said. “The best thing was going to New York and meeting Dr. Drew. [The] worst part [of doing the show] is that people think they know me. We filmed over 80 hours and they made a 42-minute show, and [viewers] think they know me, when they don’t.”