Controversial Teen Mom star Farrah Abraham is making the jump from adult films to mainstream motion pictures. As you may have heard, Farrah has been cast in the upcoming slasher film, ‘Axeman II: Overkill,’ which is directed and written by Joston Theney.

While Farrah, who will play crazed Evangelical Christian Fannie Ray Baker, may seem like an odd casting choice to some, director Joston Theney tells The Ashley that she was actually the perfect person for the role.

“When I sat down to pen the script for ‘Axeman II: Overkill’ and the character of Fannie Ray Baker–the voice, the look, the appearance and the feeling I wanted to invoke the moment she steps on screen, Farrah has that in spades,” Joston told The Ashley in an exclusive interview. “We just needed to know she could carry her portion of the film and she did–or should I say does. She is a very talented actress and I can’t wait for audiences to see it!”

He admitted that he didn’t know much about Farrah when he thought of her for the role.

“I knew who Farrah was but, as I didn’t know her personally, I couldn’t hate her or love her,” he said. “I knew she could be great as Fannie Ray but that was about it.”

The film’s first press release describes Farrah’s character as “a bible-thumping Evangelical Christian on her way with her husband and friends to the Crimson Cross’ Christian Couple Camp when The Axeman shows up to separate them… and dismember them.”

It’s no secret that Farrah has been notoriously difficult to work with on the set of her past projects. (The Ashley’s book, Teen Mom Confidential, goes into detail about what she was like behind the scenes of ‘Teen Mom.’) According to Joston, however, Farrah has been nothing but professional and hard-working during the pre-production of the film.

“She takes the job very serious and has already put in so much work researching and rehearsing,” Joston said. “She’s going to kill it!” 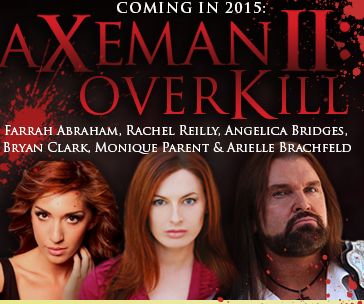 That’s actually no surprise to hear. Farrah has always had an extremely good work ethic, and it appears that she is doing her best to be successful in her first movie role. (Her sex tape co-star, James Deen, also reported that Farrah was easy to work with.) Joston said that Farrah’s reputation did not dissuade him from hiring her for the movie.

“[She’s] one of the most talented and dedicated actors I’ve ever cast,” he said. “She’s been one of my better casting choices. She’s asked very educated questions about her character, posed very insightful contributions to her character’s arc and the story, and taken my direction so well. She’s upbeat, responsive, positive and eager to deliver a great performance.”

Production for the film, which is due out in 2015, will start on September 29. The filming will take place in Frazier Park, which is about an hour north of Los Angeles.

“The wooded, mountainous landscape gives us a picturesque, small town feel until the blood starts spilling,” Joston said of the setting.

Of course, this may mean that Farrah will have to leave her five-year-old daughter, Sophia, back home in Austin during the movie’s filming.

While Farrah’s previous career choices have caused a lot of people to dislike her, Joston said he isn’t worried that this will effect the movie.

“The reception we’ve had thus far, and what we expect to receive in the future is very welcomed,” he said. “Given the success of the original film and the addition of recognizable pop culture names, which opens us up to a greater audience, I believe we’ll do very well and might even surprise ourselves!”