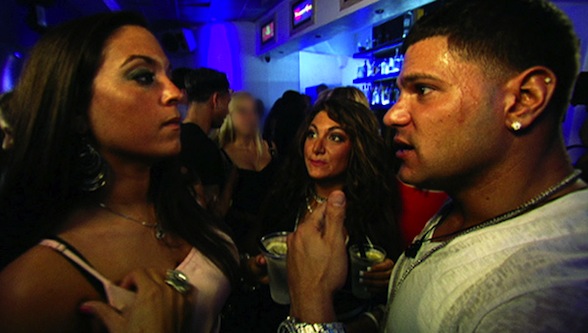 Ronnie Ortiz-Magro was there to support his Jersey Shore roommate, Jenni ‘JWoWW’ Farley last night at the premiere of her horror movie ‘Jersey Shore Massacre,’ but one of Jenni’s MTV co-stars was mysteriously missing from her typical spot on Ronnie’s arm–  Sammi Giancola. When asked by reporters where his girlfriend Sammi was, Ronnie delivered some heartbreaking news to the show’s fans: he and Sammi have split, and this time, it’s for good!

“We were drifting apart and not really spending any time together,” Ronnie told People on the red carpet. “I still care about her. She’s a great girl, but we were growing distant. It was for the best.”

The Ashley got a tip a few months back that the ‘Jersey Shore’ couple had broken up; however she was unable to confirm the news, hence why she did not write about it. The tipster said that Ronnie and Sammi were not really together much at all during the early part of 2014 and tried to keep their break-up on the down-low.

Ronnie told People that he is not currently dating anyone and that he doesn’t feel that he is ready to meet someone new. As for Sammi, she seems to be keeping busy promoting her shopping line and hanging out with friends.

As so, we finally close the book on the Saga of Ron & Sammi. Let’s all down a shot of Ron-Ron Juice and mourn the loss…