List-a-Polooza, The Challenge/Real World, Video-a-Polooza
November 15, 2014 by The Ashley
2

The Challenge star Diem Brown died yesterday during her third battle with cancer. Her friends, family and fans continue to mourn the loss of Diem, who was a bright light on the ‘Challenges’ and an advocate for cancer patients everywhere. While Diem did amazing things during her 32 years on this planet (check out Medgift.com, the registry site she founded), it was her on-again-off-again with fellow ‘Challenge’ star CT Tamburello that the show’s fans were fascinated with.

Diem and CT met on while filming “The Duel” in 2006 and began a relationship that lasted nearly two years. They split due to Diem wanting to focus on her career, among other things. Eventually, they met up again to compete on ‘Battle of the Exes’. Their time on that season stirred up some buried feelings between the couple, but they did not get back together, at the time. According to one of The Ashley‘s sources, Diem and CT resumed their relationship after the “Rivals 2” reunion, and were together from about the spring of 2013 until her death.

The Ashley considers the love story between CT and Diem to be one of the greatest ever to play out on reality television. Viewers could literally feel the love and passion between them when they were on screen together, even if they were arguing.

As a tribute to their relationship, The Ashley has put together her Top 5 “CT and Diem Moments” of all time…

During the “Sh*t They Should Have Shown” episode for “Battle of the Exes,” Diem and C.T. recount how, during the final, they mistakenly believed they had to strip down to their undies to run through a freezing cold lake in Iceland. (They didn’t realize that they were going to be allowed to wear long john underwear and wetsuits!) When Diem starts freaking out because she’s wearing a thong and it will be shown on national TV, C.T. takes one for the team and wears his ex-girlfriend’s thong so she can wear his boxer shorts.

“It’s not fitting at all,” Diem tells us of C.T. trying to squeeze his Boston beans into the skimpy underwear. “Multiple members are out!”

(Scroll to the 9:43 mark to watch!) Diem and Aneesa were competing in the last Jungle for a spot in the “Rivals II” final. Earlier, Diem had said that she had felt like C.T. had used her in order to get himself further in the game and the two weren’t on the best terms the night Diem and Aneesa went into the jungle. They ended up losing, and Diem went over to the other contestants (who were standing on a bridge above her) to say goodbye. When she got to C.T. he lifted her up for a final hug and it was obvious to everyone watching that, despite their problems, there is still a lot of love between them.

3. CT encourages Diem to remove her wig and be vulnerable.

There were several moments in which CT told Diem to remove her wig or hat and just be herself around him, despite her hair loss from cancer treatments. During ‘Battle of the Exes,’ Diem and CT talked about this.
“He made me feel like a woman again,” Diem said of CT. “CT knows my weak spot,” she said. “Not feeling comfortable without my wig.”
Still, he encouraged her to take it off, and would often rub her head as a sign of support. The video above is beautiful, and shows many of these special moments between them.

CT and Diem had been flirting non-stop and after a few weeks, CT finally decided to make his move. He took Diem to the edge of cliff, overlooking the ocean, and the entire house (and most likely a lot of the film crew) waited with baited breath for CT and Diem to finally share their first kiss. Of course, CT and Diem had no idea they were being watched, but the footage turned out to be some of the sweetest ever shown on ‘The Challenge.’

“I wanna cry,” Wes said of watching that moment. “It’s like I’m watching ‘The Notebook!'”

1. CT was there for Diem until the very end. 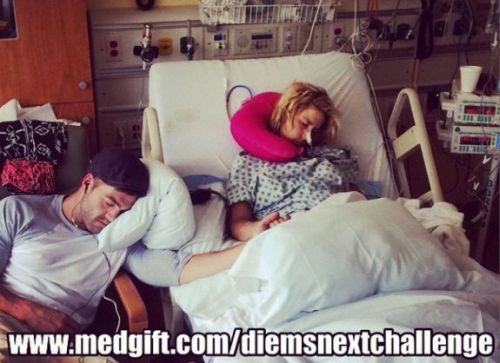 CT was there for Diem when she needed him, right up until the very end. In September, he posted this photo of him and Diem in her hospital room, as well as several other photos of Diem to his Instagram account, encouraging fans to donate to her MedGift page. The Ashley’s sources say that CT quit the ‘Challenge’ as soon as Diem collapased and flew to New York City to be by her side. He stayed with her during her final months.