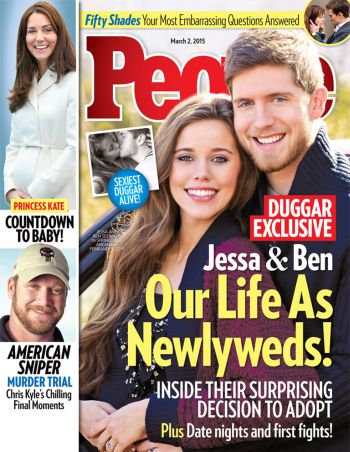 The latest issue of People magazine features newlywed 19 Kids & Counting stars Jessa and Ben Seewald on the cover. The couple, who got hitched in November, opened up about married life, Jessa’s litter of siblings and a variety of other things in the interview.

However, The Ashley realizes that most of the show’s fans are too cheap to actually buy a copy of the issue, so she figured she’d help y’all out and just give you all the good stuff that Jessa and Ben reveal in the article. (No one cares about what Jessa cooks Ben for dinner—we want to know the juicy stuff!)

Here are the seven most interesting tidbits pulled from Jessa and Ben’s People magazine interview.

1. Jessa and Ben chose to have their first kiss in private because they didn’t want people critiquing their kissing.

“I didn’t think it would be that big of a deal,” Jessa said. “This was our first kiss and we’d never done it before. We didn’t want to be a spectacle.” Ben added that they didn’t want their wedding guests critiquing their kissing.

2. Jessa and Ben may break Duggar tradition and buy a television set.

The Duggars don’t believe in watching TV (even though they are the stars of a TV show), but now that Jessa’s on her own, she may want to get herself a boobtube.

“We don’t want a television right now but we may get one eventually to watch football games or a cooking show every now and then,” Ben said.

(You know Jessa’s just dying to get one so she can watch herself on TV! It’s quite obvious she’s all about the fame!)

Ben and Jessa state in the article that they want to adopt “a lot of kids.” However, they are unable to start the adoption process right now because they have only been married for a few months. The law requires that couples seeking to adopt a child must be married at least two years. (On top of that, Ben is only 19. Those seeking to adopt must be at least 21 years old to do so.) That leaves them a few years to crap out a couple biological kids before adopting.

4. Jessa is NOT pregnant.

Websites have been speculating since Jessa and Ben got married that Jessa is pregnant; however the couple insists that’s not the case—yet. Since Jessa’s sister, Jill, got pregnant immediately after her wedding, everyone is expecting Jessa to do that same. Even Jessa’s little sister, Jordyn, asked Jessa why she wasn’t pregnant yet.

“Her sister is used to people in the family getting married and being pregnant right away,” said Ben.

5. Jessa’s not pregnant, but she thinks she’s fat because of all the people thinking that she’s pregnant.

Apparently all the “bump watching” fans have done a number on Jessa’s self-esteem. Ben revealed that Jessa thinks she’s fat.

“We fight about this,” Ben said. “Jessa thinks she’s fat, but she doesn’t remember all the times that people tell her that she looks great.”

6. Ben may become a pastor.

At the age of 19, Ben has already obtained his AA degree and is considering going to the seminary to become a pastor. Currently, he makes a living doing chores for Jessa’s dad, Jim Bob Duggar.

Oldest Duggar girl Jana is not dating Tim Tebow (they reconfirmed this again in the article). She is, however, going to deliver her younger sister Jill’s baby when he arrives in March. Jill will have a home birth and be assisted by Jana and a team of midwives.

If you want to read the full article, it is currently for sale on news stands!