Matt Paxton has cleaned some of the dirtiest houses in America. He’s been starring on the show Hoarders since its premiere on A&E in 2009, but has been helping hoarders before anyone even knew what a hoarder was!

“Hoarding is cool now,” Matt said. “I did it for five years before anyone really knew what it was. When the show came on [in 2009], the day after [the first episode] aired, I got about 500 emails from people thinking they needed help. We really didn’t know how big hoarding was until it aired.”

With about 1,000 home cleanups under his belt, Matt is embarking on a new season of ‘Hoarders,’ the first to air since the show was cancelled by A&E in 2013. Lifetime has picked up the show and given it new life. While the gross-out factor of the cleanups remains, the new episodes will also focus on the hoarder’s life, and the reasons behind their inability to clean.

“People want to see gross stuff but on Lifetime they are spending a little more time focusing on the therapy,” Matt said. “They are really making sure we show more of that mental process. When we started the show, hoarding was not a recognized mental disorder, but now the American Psychological Association has recognized it which means…the show helped bring awareness to it. We’re not the sole reason but we were part of it. For a mental disorder to be part of pop culture is amazing.”

In an exclusive interview with The Ashley, Matt answered the most frequently asked questions he gets about ‘Hoarders.’

Q: What percentage of the people that are featured on ‘Hoarders’ stop hoarding after the show ends?

While Matt didn’t have the exact figures, he said that if the hoarder doesn’t follow through with the therapy that the show offers them, they will almost surely go back to their old ways.

“I’ve done about 1,000 houses in 10 years. Hoarding is a mental disorder, so you have to treat it properly or the cleanup doesn’t work,” Matt said. “For the people who have followed through with the therapy, they have about a 60 [percent success rate]. If they don’t participate in therapy it’s about 100 percent failure rate. If you’ve got a buddy that’s an alcoholic and…you throw out his beer, he’s just going to go out and buy more beer unless he treats the problem.” 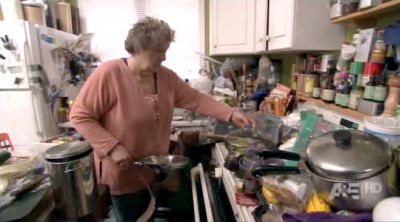 Q: Isn’t it exploitation to put a hoarder on TV?

Matt said that he gets this question all the time from people who feel that it’s not right to put mentally ill people on a reality show.

“What I tell them is that it’s a fair question,” he said. “I make no qualms about what it is: We’re putting a person with a mental disorder on television for entertainment. But I know wholeheartedly that we are bringing awareness to this [disease] to people who would never get it.”

Matt also stated that every hoarder that has ever been featured on the show has been offered free, extensive therapy to help treat their illness.

“We provide therapy for every participant,” he said. “They also get a home cleanout from one of the best cleaners there is. Most people would never be able to afford that, and they get to work with one of the industry’s top therapists. Cleanouts range anywhere from $1,000-$70,000, and rats are not included! We provide compassion care for these people. We know what’s going on mentally with these people, we understand the disorder.

“I wouldn’t do the show if they didn’t get therapy,” he added. “Without the therapy you [would] just be taking advantage of them. Between therapy and the cleanout, it would be impossible to get better care.”

Q: How real is ‘Hoarders?’ Are things placed in the homes to make them more extreme?

No way, says Matt, adding that the drama that occurs on ‘Hoarders’ is totally organic.

“Reality TV needs drama, but we are  one of the few shows left that we don’t have to create drama [for],” he said. “We have natural problems that happen every day. It may not be pretty, but it’s reality. We don’t know what’s going to happen, and that keeps things interesting.”

Q: Has there ever been a house that was too dirty for you to clean?

Dirt and filth are never a problem for Matt, but safety is another story.

“Filthy and disgusting, those can’t be reasons I’d say no [to a cleanout],” he said. “Dangerous structurally, yes. We had to leave one house because it was about to fall down. It was that bad. We’re not going to risk that. But as far as gross and disgusting, I’ve built my business on doing that. As long as a person is willing to go to therapy, I’ll help. I had a house with 18,000 gallons of a person’s bottled urine! I can handle it.”

“We used to have a no-needles policy on ‘Hoarders,’ but we don’t have that anymore,” he said, adding that the show has very strict safety rules for the cleanup and film crews.

“Big things to watch out are for needles and structural issues,” Matt said. “Urine and feces are really dangerous things. But we’re so focused on safety though. We have had houses that we scout and they are way too dangerous, and turn them down before filming. The therapist will interview the hoarder and if they don’t think they’re mentally prepared we will turn them down. I never meet them. We aren’t just throwing people on, that’s the benefit.”

Production on one episode of ‘Hoarders’ did have to be shut down due to a dangerous person, rather than a structure, Matt says.

“We stopped one cleanout because a family member was too dangerous and aggressive,” he said, adding that the only other shut-down was the house that was about to collapse.

Q: Whatever happened to the “Liquid Cats” woman?

Matt says he’s constantly asked for updates on certain hoarders featured on the show. One such person, a woman who kept dead cats in her fridge, is someone he’s frequently asked about.

“That became known as the ‘Liquid Cats’ episode,” he said. “The woman had 60 dead cats in the fridge. It looked horrific, but there’s always a reason. She loved these animals and she was working two jobs to have them properly cremated. She was working double shifts to save money to cremate them. The story was sweet but when you open the fridge…”

That particular cleanup had lasting effects on Matt’s diet.

“The part that grossed me out was there was strawberry yogurt in the [fridge], and there was some cat hair in it,” he said. “That means that she had opened it, eaten a little and then put it back. After I saw that, I’ve never had yogurt again.”

“She is good, I can’t give a lot of updates but I talk to her son and we became friends,” he said. “You get really close to these families. We’re in their lives for a long time before and during production.”

Q: What’s one thing that most of the hoarders featured tend to have in common?

Surprisingly, a lot of the people that are afflicted with this disorder have one common trait: They are often caregivers of some sort.

“The majority of our hoarders are caregivers—teachers, social works, which means they are caring, loving people,” he said. “It’s a misconception; people think hoarders are nasty people. They’re actually cool, caring people. Most of the stuff they save is to give away to other people, actually.”

Q: What happens to items found in the house that are worth money? Do they always get thrown away?

Although it seems like items are hauled out of the hoarders’ houses by the trash bag full, Matt says they don’t throw away as much stuff as viewers think.

“If items are valuable, we will find a way to clean it,” he said, adding that he works with a cleaning and restoration company. “We have come across a Monet painting, a million dollars in gold. We have a catalog to [check the value] of items.”

Q: What’s the one thing you hate seeing in a hoarder’s house?

Matt has seen it all—dead animals, snakes and thousands of rats. However, the one thing that still creeps him out is insects.

“I’m not big on spiders. I don’t like them,” he said. “Roller coasters and spiders make me sick. I can clean anything but I get sick on a rollercoaster. But I can clean up anything.”

The new season of ‘Hoarders’ premieres tonight on Lifetime.