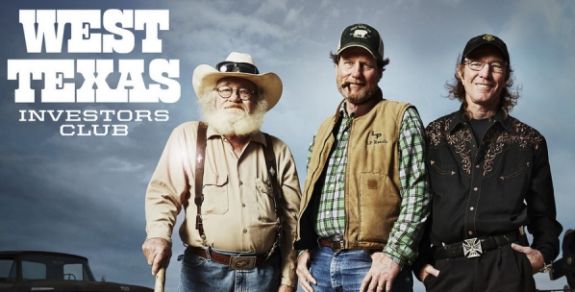 There’s a new McConaughey hitting Hollywood– and he’s bringing his two buddies (and bags of oil field money) with him.

Rooster McConaughey, brother of actor Matthew, stars on the new reality show West Texas Investors Club, in which he and his fellow self-made millionaire pals, Gil Prather and Butch Gilliam, meet with entrepreneurs and invest in startups they deem worthy, all while drinkin’ beer and tradin’ jabs with each other. (Think Shark Tank meets Duck Dynasty).

During a TCA panel today, Rooster and his pals gave journalists a look at the show (which, by the way, premiered last week to big ratings) and answered questions about their lives, their show and, of course, their money. They also revealed at least five little-known facts about themselves.

1. They didn’t steal their show’s name from Matthew’s movie title.

While both McConaughey brothers have starred in something that has a Texas “club” in its title, Rooster and the guys swear that they didn’t hijack the show name ‘West Texas Investors Club’ from Matthew’s hit movie “Dallas Buyer’s Club.” In fact, it was just the opposite.

“We had that name before that film [came out],” Butch said.

“We’ve been called West Texas Investors Club for a while,” Rooster said. “They’ve always called us that. It was way before Dallas Buyers Club.”

2. The guys are not fans of Donald Trump.

While they may be businessmen like The Donald, the ‘WTBC’ guys say that the similarities end there.

“The trouble with Donald Trump is that his thoughts turn into words,” said Butch. “It may be a good thing or a bad thing but it’s sure true.”

While none of the guys have ever met Trump, Butch said he’s had an interaction with him from afar.

3. They aren’t much for readin’ and writin’.

All of the men featured on the show are self-made millionaires but none of them spent all that much time in school.

“We’re not highly educated people,” said Butch, adding that he hasn’t let that get in the way of his ability to make a good investment. “Some things are already above our heads but we have a group of folks helping us. In business, you don’t have to be the smartest guy in the room. You have to be smart enough to know what you don’t know and smart enough to know who does know.

“People do underestimate us, and they’re probably right,” he added. “We’re not all that smart. I quit school…”

The guys are only willing to invest their money with people who want to work hard.

“We are not about enabling people,” Rooster said. “[We’ll invest] if a person wants to work and try hard…you don’t have to be the greatest money maker in the world. That’s our message. We’re not out to enable somebody; they have to put an effort in.

5. Rooster got some brotherly advice from Matthew before starting on the show.

Matthew’s been in the entertainment business decades longer than Rooster has, so it was only fitting that he give his bro some advice on how to handle Hollywood.

“He was excited [about my show],” Rooster said of Matthew. “He said ‘just be yourself. There’s nobody [better than you] being yourself.”